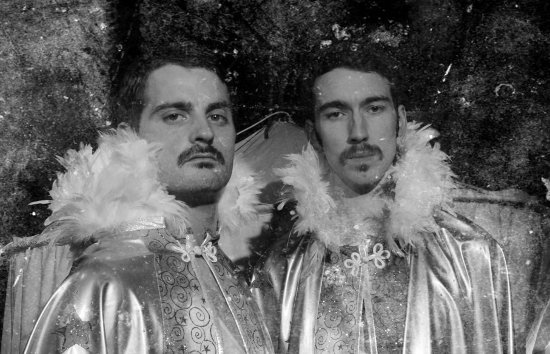 From New York to Bombay, from Paris to Abyssinia, the Spavaldo brothers performed their flying trapeze daredevil stunts without a safety net for over a quarter of a century before their mysterious disappearance. Now they are back to tell their story and dare audience members to join them inside the big top… high up on the flying platform.

Originally commissioned by the Roundhouse as part of CircusFest 2012, The Great Spavaldos is a 25 minute immersive theatre piece for two people at a time. Fitted with video goggles and headphones and following instruction to a tightly choreographed series of movements, the participants are cast as the central characters in a multi-sensory cinematic experience where they take the roles of circus performers.

The participants follow instructions that match the camera movements to become part of the action itself, allowing them to experience the piece both as audience member and performer. With their eyes and ears completely hijacked, and liberated from any responsibility for the outcome of their actions in the film, participants find themselves fully surrounded by the fictional world of The Spavaldo brothers. As the narrative unravels, this new reality becomes even more immersive through live interactions that engage their sense of smell, touch and movement through space.

The show involves being physically moved in the space and lifted up and onto a swinging trapeze. Whilst in the goggles the participants see themselves on a high platform ready to perform at great heights, ushers are mirroring the feeling of the movements by operating a simple lift system, placing them onto a step, about 10 cm high, and sitting them on a trapeze rigged at less then a meter off the ground.

Brief description of set:
The show is very flexible and responsive to different sites. Three different spaces are needed: Space 1: Intro – this could be anywhere, a corridor is preferable, where you have the sense of going somewhere. Space 2: Small tent – provided by the company. A rigging point is needed to install the tent. The tent could be installed in the same space as the main performance space (see below). Space 3: Main space – this should be big enough for people to walk around in a big circle and for the lifts and trapezes to be rigged to one side. The space needs to be at least 5 meters high and equipped with a bar from which to rig the trapezes and lift systems. The company provides: 4 DVD players and connecting cables; 6 pairs of video goggles; 6 sets of headphones; 6 media players; 4 mp3 players; chargers and usb cable to re-charge equipment. Lighting equipment required: 2 fresnels; rig and aerial equipment, provided by the company, 2 platforms and lift system, 2 trapezes. Other equipment required: 2 small stools, a small folding table (card playing), extension cables, 1 sack of play sand, 2 small platform (0.5m x 1.20m Height 15cm).
Min dimensions: 6.0m wide, 6.0m deep, 5.0m high
Rigging:
See description.
Music:
Recorded
Lighting plan:
No
Crew on tour:
2 directors, 1 producer (where possible)
Get in / get out:
4 hours get in / 4 hours get out