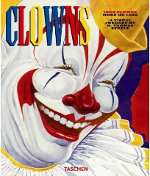 Yawning, winking, gurning clowns – in drag, blackface, whiteface, frilled. Clowns on stilts, with lassos, with giant bats and cigars. Dwarf clowns under the feet of rearing elephants. Families of clowns and clowns in studios. Clowns tying on boots and putting on makeup, at rest, at ease, with tattooed bare arms and regular hair.

1000 Clowns is a large-format illustrated book divided into six sections – Photography, Film & Television, Paintings, Graphics, America's Clowns, and Clowns in Movies – where each part addresses the formality of a minimal introduction before launching its clown barrage: whole-page and tiled photos and illustrations exploring the full clown spectrum (which is infinitely granular between the points Hysterical, Absent-minded, Downtrodden, Forbidding and Murderous). It's actually a lot of fun, particularly the photos of off-duty clowns hanging out round the back of the tent, and there's one extraordinary double-picture: a shot of a group of clowns playing cards, and then, below it, the same group of men, sans make-up, in suits, with slicked back hair, playing the same game of cards but looking now like members of the House of Representatives. The section on Graphics becomes a section on advertising – with ads for Camel cigarettes, Zippo lighters (of course), Life Saver candy, Rice Krispies, Welch's Fudge ('My Goodness – Such Goodness'), Beech-Nut Gum (a clown and moustachioed strongmen enjoy a pack together after the show), wrinkle-proof ties, Kool-Aid, Dr Pepper, and Heinz Pickles (the only one in the whole ad section to use real photographs rather than illustrations, and consequently quite severe and eerie).

In what seems like an impressive piece of research most of the pictures have captions that name the artist and the circus (we're introduced to such characters as 'The King of Clowns', Felix Adler, bottle-feeding his pig Honey, and 'Heavyweight Clown' Horace Laird), making the book a potential resource for research and lead-generation as well as a fun and engaging and perhaps slightly haunting collection of pictures.