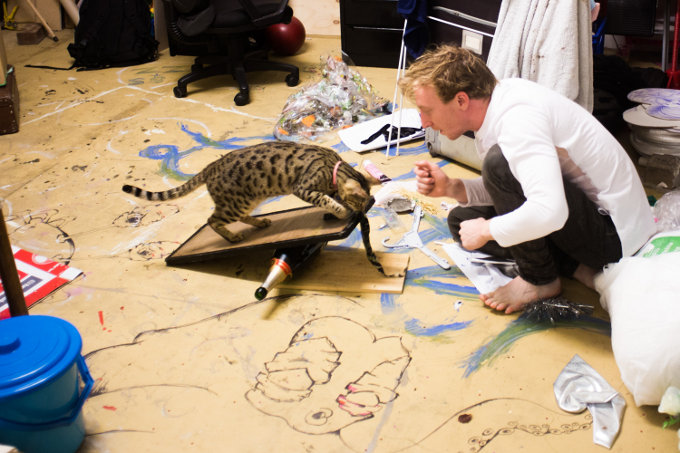 To open the new year, Sideshow invited a selection of circus artists to respond to a simple question: what are you going to be working on in 2015? Here Skye Gellmann immerses himself in the virtual, Tim Lenkiewicz contemplates a u-turn, and Kaveh Rahnama gets ready to launch a new company.

2015 feels loud, exciting, quiet and focused for me. A year of mixed emotions and formative learning. To begin the year I’ll be acting and circus’ing as part of Societas Raffaello Sanzio’s Jack and the Beanstalk at Adelaide Festival in February. This should be incredible!

From there, I feel like I’ll be spending a lot of time in Sydney, in my old vine-covered house, on our studio floor, which is painted with scrawling naked bodies and tentacle monsters, living next to the most beautiful performance artists. I’m newly married and we have a cat!

In that house, I’d like to start producing a new circus work and for it to be highly precise – which is different from my usual ad hoc creations. I’d like to incorporate computer technology into that experience too. I’ve become interested again in the ‘Virtual’, and the current obsessive trend towards it being important. This ideas consumption culture where Immersivity has become the new buzzword – I’d like to mess around with that.

On another note, I’m going to re-start pushing circus into the public eye. I’d like to produce a one-day circus festival in Sydney, where the focus is on an online presence and building an audience for circus in Australia; circus needs to become an important and integral part of culture so no use just talking about it!

I think the next year is going to be quite a departure from this last one. As we all know, financial constraints are increasing, as is the focus on engagement. For the last four years I've been working to a strategy that seems as though it may no longer be viable. Our productions travel with a minimum of ten people, a comparatively long set-up time, and, in line with other circus companies in the UK, play to relatively small audience numbers... these facts combine to mean rather a lot of subsidy.

Now that the funding is looking scarcer, I find myself wondering about the realistic potential to realise the long standing call for the development of circus in this country. There are many people doing performances using circus skills and there are now more well-trained circus performers than ever, but I'm having trouble understanding how to create work for them. Proper well-paid work, doing what they've been trained to do, enabling them to pay their London rent.

So to avoid launching into a discussion about funding, I think this next year will be very musical for me. I'm hoping to see more parts of the world and to meet new people to collaborate with and hopefully through this, to find new ways of approaching my artistic work that are viable.

Kaveh Rahnama / Nearly there yet

In January I'll be launching the website of my brand spanking new company Nearly there yet, then in February I'll be working with Genius Sweatshop on Lab rat. This is a show I’m pretty excited about. We did a short period of R&D on it in early 2014 and we just received funding to explore the idea further, eventually turning it into a full-length show to tour sometime in the not-too-distant future. It uses puppetry and circus to tell the story of a man who signs up for a medical experiment. It all gets a bit out of hand. It's inspired by Flowers for Algernon.

Other than that, who knows? I'll be looking at trying to continue to develop The Party with Jacksons Lane and director Mary Swan. I'm training hand-to-hand with Tamzen Moulding, and I'd like to develop work with her at some point this year. I also want to give directing a go. I've done bits of work as an outside eye over the last year and I really want to get stuck into a big juicy story in 2015. It'll be under Nearly there yet I think.

Mostly, I'm just enjoying the brilliant collaborations that have been happening and will continue to happen. Ed Stephen, Tamzen Moulding, Hazel Lam and Alice Allart have been great to work with this year – as have Mary Swan and Flick Ferdinando. All the people at Proteus have been amazing as well, as have Jacksons Lane as a venue.