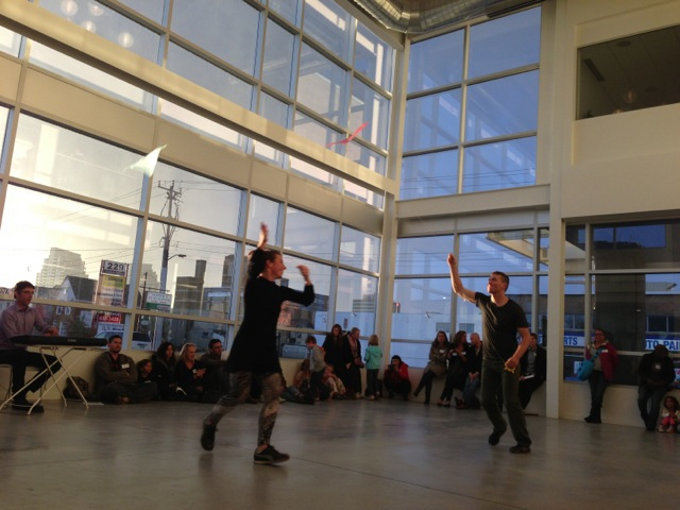 To open the new year, Sideshow invited a selection of circus artists to respond to a simple question: what are you going to be working on in 2015? Here Kevin O'Connor is led by an iflight, Room 100 opens Hala 100, and Acrojou bring science and technology to the stage.

I am currently thinking about participatory multi-generational art making practices. I’m part of a collective of settler Canadian and Indigenous artists based in Ontario, Canada, and we’re interested in performances where new kinds of presence can emerge. We question how the participants/ audience open themselves up to being made different by interacting with different people and the ecology that the performance takes place in. We ask how performance can attune to the particular grooves that it rests on, so that it does not erase the colonial histories that allow the performance to be played out.

I am also researching stillness in movement. In doing so I am interested in the moment before movement occurs. In the point point between the virtual and the realised movement. This point reminds me of some of my training at ENC in clowning where you open yourself to the stranger within, to the not-yet.

Finally I continue to work with an indoor kite called an iflight. This is a small kite that picks up the air currents in any room that it is flown in. I think of it as an apparatus to play with and to be played by. In flying the kite I keep asking and moving towards the feeling of the kite flying me. In doing so, I again have to play with stillness, becoming tender, extending my attention beyond my skin-bound body, and becoming aware of how I move the kite as it moves me.

After almost five years of negotiating with Split City Council about using of one of the public spaces in Split for our work, we finally have our own place in our hometown. We didn’t manage to negotiate it with the Council, so instead we’ve been renting an industrial warehouse since October 2014. With support from the government’s foundation for contemporary arts and culture, Kultura nova, we are adapting it into a training and creation space for the company. We call it Hala 100 (Hall 100), and we hope that in the coming years it will become a residency space and a small venue for contemporary circus in Split.

The thing we are most looking forward to in 2015 is that in February we’ll start producing a new creation with the two of us back on stage. With co-production assistance from Festival novog cirkusa, we are approaching the project curious to discover how we can follow the performance C8H11NO2 and continue our exploration of schizophrenia on stage.

Besides creating a new performance and presenting the old one, we are looking forward to different projects that will introduce the contemporary circus arts, their history, importance and complexity to Croatian audiences – through circus movies screenings and international circus artists hosted in Hala 100 and the music venue Judino drvo. Maybe 2015 will also be the year for a first edition of a festival of contemporary circus in Split – we will see when the results of the different funding programmes we’ve applied for are published...

2015 is going to be a pretty big year for us! Alongside our summer touring of festivals and events, we have several exciting new strands coming into the mix.

For the first time in our history, we are going to start expanding both the creative and infrastructural sides of Acrojou. As well as allowing us to run more efficiently as a company, it’ll also support our continued artistic and creative development. This expansion will take the form of new company members, new roles and new projects!

We had a really fun and successful 2014 with our long-running show The Wheel House, and our new commission, Frantic, touring across the UK and abroad. The beginning of next year will see us developing the physical and narrative content of both shows. It will also see us beginning work on a brand new outdoor performance, Monsoon.

Monsoon will explore man’s technological and scientific evolution, and how this has affected our self-perception, our relationship to religion, and our shifting place in the natural world. We are really excited about the artistic and scientific collaborations in the upcoming R&D.

One of the creative objectives for Monsoon is to combine science and performance live on stage. This is a large step forwards in our ongoing interest in using materials to create visual metaphors to support the narrative. For example, we realised this in our recent show Frantic with the transition from sand to water, dry to wet, as a metaphor for the protagonists shifting state of consciousness.

We intend to use part of the coming year for ongoing research into materials (metals, magnetic particles, etcetera) and unusual or interesting reactions, as well as their potential use in a narrative and outdoor performance context.