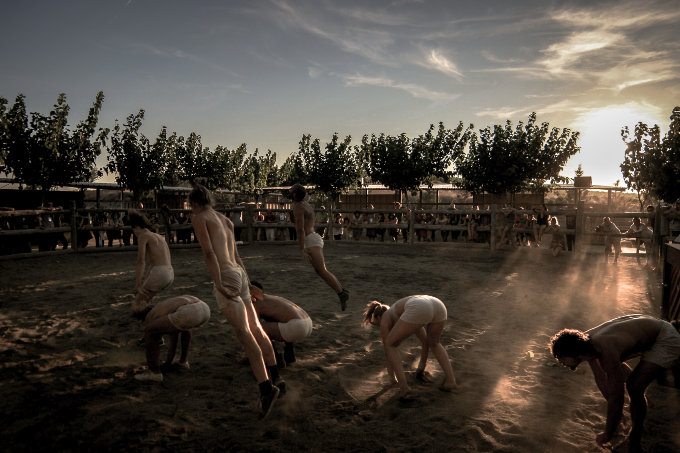 To open the new year, Sideshow invited a selection of circus artists to respond to a simple question: what are you going to be working on in 2015? Here Animal Religion make a shows of many parts, Ockham's Razor secure a new home, and Collectif and then... return power to the people.

Last year the two of us [Quim Girón and Niklas Blomberg] also performed a little seven-minute number at the National Theatre of Catalonia in which we used a grand piano. Barcelona’s L'Auditori music house came to see that piece, and really liked it, and they got inspired to invite us to create a full-scale show for their space.

We start creation in February, but we've been passing notes and ideas back and forth for awhile now. What we know right now is that the show's going to mix circus with electronic and classical music (we invited a big soprano here in Catalonia to join the project), and it's going to have a deep ocean ambience. Making Chicken Legz last year made us realise that we wanted to do more collective work, and so for this show, called Sifonofor, we're bringing together thirteen people.

We've named it Sifonofor after an organism that lives in deep water. The name sounded somehow musical, and we liked the idea that a Sifonofor is one animal but is composed of separate organisms, each with their own part yet contributing to the whole.

We have a residency in France next February in Paris at Espace Périphérique, then we come back to Barcelona and finalise the creation for a premiere on 20 February 2015.

We've also been working on a street show with two men and a forklift – Tauromaquina. In Spain we call these machines 'toros', like a bull. So with Tauromaquina, which we'll premiere in the summer, we take it into a machine dimension, and we have fights between animals and humans and machines. The question is, Who is leading who?

For us 2015 is a year of home making, creation and performance. We are overjoyed to finally have our own creation space – we have a three-year contract on part of a beautiful, warm space in South London. For part of the year we will be using it to create our new show Tipping Point. But we're also very excited about how it can be used as a hub for creation, exchange and exploration in the coming years – setting up skill shares and bringing workshop leaders to London to benefit the whole circus community.

In Tipping Point we want to take an incredibly simple object – a 5m metal pole, and find all the ways we can use it and transform it. We want to see how rich and complex a world we can build from one simple element, to create for an audience the joy, surprise and satisfaction that comes from invention and imagination. The pole already has a strong circus tradition, and we're looking at how we can use the principles of these traditions (perch, Chinese pole, Russian bar) as well as researching new movement possibilities.

The show, which will be our first made specifically to be performed in the round, is being created in collaboration with Philip Selway from Radiohead, who is writing an original score and sound design. We are incredibly excited to be working with him. We met him a few years ago and have been waiting for the right project to collaborate on. We are both interested in how we can experiment sonically with the experience of being in the round.

We will be making the show in spring and autumn – with previews and premieres happening from October, including The London International Mime Festival in January 2016.

The focus of our creative work is also personal as all three artistic directors are expecting their first babies this year: Tina in Spring and Alex and Charlotte at the beginning of the summer. There is some wonderful work being done at the moment around parenthood and creation (including Matilda's Leyser's Mothers who Make movement), and we are looking forward to this next stage of our lives, what it will bring and how it will inform us as makers.

2015 is the beginning of two new adventures (that we know of). This year we aim to take steps towards being braver with our political statements, and to take a more active role within the arts community, starting new collaborations and opening up our artistic process.

The first new project involves building a machine in collaboration with Serbian collective Karkatag, working between London, Berlin and Serbia. The machine will be largely powered by members of the public and will involve some kind of hair hanging contraption. We are hoping this new collaboration will extend beyond the life of the project.

The second began as a residency in Espace Périphérique last year during an exploration of borders. The project has become No Mans Land, which we hope will take across borders – physically and mentally. For this we will be taking part in residencies in L'élastique citrique in Switzerland, Cirqueon in Prague, and Jacksons Lane in London.

Aside from these new adventures, we will continue to tour our physical comedy floor show The Greatest Show on Earth, aerial comedy We do love little kittens, and outdoor aerial performance La Preuve Par 3.