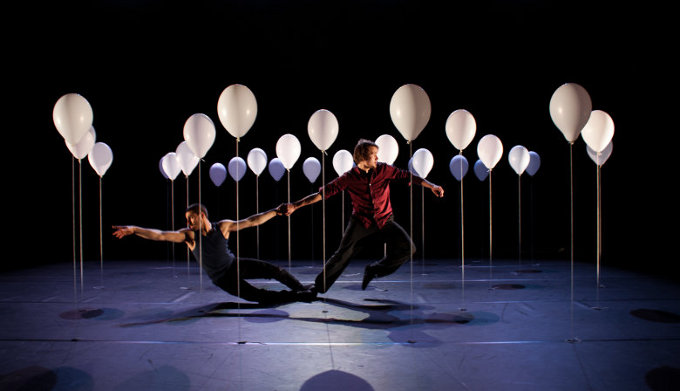 To open the new year, Sideshow invited a selection of circus artists to respond to a simple question: what are you going to be working on in 2015? Here Cie Nuua get closer to the body, Olle Strandberg extends calendar time, and Gandini Juggling throw things (obviously).

We’ve got a lot of touring, all through 2015, with our show Lento. In January we come to New York, then go on tour in France, Belgium and the Netherlands, so we’re going to be on the road for a big part of the year.

We’ll also be working on a new project, Post-common sense. We started it in 2014, when we did two experimental residencies in Finland and in France, and then next year we really start the creation: there’s going to be two months of work on it in 2015, plus the thinking work that you’re kind of constantly doing.

The new show is a little more physical than Lento. It’s going to be similar in the sense that it’ll also apply juggling to different and unusual objects, but whereas the balloons in Lento were used in a beautiful and poetic way, in this new piece we’ll get more into physical work with the objects and move away from Lento’s dreamlike/theatre style to try to bring the show closer to real experience that takes place in the space with an audience. We focus a lot on a closer look at the human body. What that means in practice right now is we’re looking at how we can use costumes to sort of magnify the human body and the physicality of the performance – how a costume can reshape around a performer – and we’re looking as well at using different kinds of microphones to amplify sounds in order to zoom into the body and the action. This piece is going to be very rich in different objects and influences, just like circus.

2015 will be something extraordinary for sure. First of all it’s my fame year according to the 9 star ki. A friend recommended a 9 star ki app that told me this and I see no reasons to prove it wrong. I’ll start the year with shows in Graz and NY with Underart. Underart will then keep on touring throughout the year, going to Haute Tensions in Paris and Polo Circo in Buenos Aires – to name two festivals that I’m really looking forward to. During the spring I’ll also be working as the choreographer on Tilde Björfors (the founder of Cirkus Cirkör)’s next production with the working title Borders. I’ll also keep on working with Cirkör LAB and we’ll try to redefine exactly what our laboratory for artistic brilliance is and how we will work in the future. With residencies, labs, performances, etcetera... That is a highly exciting project.

This is also a year where I’ve got a bunch of inspiring smaller projects going on. The great concept ‘Almost a jam’ will be playing at least two times during 2015, I’ve got two more or less secret projects coming up, and on top of that I’m already starting the research for two new productions that will hopefully premiere during 2016 and 2017. And it’s Cirkus Cirkör’s 20th year anniversary as well so we’ll be in celebration mode all year, 24 hours a day. I already feel like a want a couple of more months this year. Maybe 15 or something. December, Ecember, Fecember, Gecember.

2015 continues Smashed's adventures across the globe with premieres in Russia, Australia, Turkey, Hungary and quite a few other countries.

4 x 4 is a return to where we started, in the matrix, in the numbers, looking for the beauty in there. We premiere in January and then premiere in France, Germany and Finland.

We are also rehearsing and making a new piece called 8 songs, which is a tribute to the some of the great rock songs.

We need to take deep breaths, remember that it is only throwing things, not let the fear defeat us.