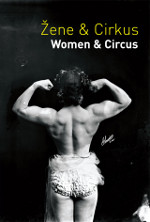 Documenting the conference, also called Women & Circus, that took place alongside the fifth edition of Croatia's Festival Novog Cirkusa, this book is a sumptuous 542-page volume that interleaves 191 full-colour (and often full-page) photographs from circus' glorious past and fractured present between the edited transcripts of thirteen conference papers. If you imagine that the event's central impetus—the provocation to speak about women and circus—is the hub, then each of the papers is the spoke of a wheel, travelling outward from the same origin but in individual directions. By turns, the writing tracks the shifting intersection of gender, sex and identity; examines the friction between gender performance and circus performance; lays bare the stark disparity between the life of the circus and its marketed image; gives us a personal account of the relationship between Annie and Valérie Fratellini, mother and daughter; and relates the autobiographical practice and philosophies of Angela Laurier and Jacques Derrida—doing so from the perspectives of sociology, anthropology, performance arts criticism, journalism, personal experience, and artistic practice. Many of the papers also include transcripts of the Q&A sessions that followed the talk, and the book ends with a final selection of 'Circussions' (neologism grade: C+) between the conference speakers and on the subject of work presented at FNC (with a particularly good back-and-forth concerning Jeanne Mordoj's Eloge du Poil, with Jeanne herself contributing).

Among the papers, in line I suppose with my own interests, I liked best the pair from Yoram S. Carmeli and Jana Drašler—both of which, instead of taking what I think of as the 'newspaper clipping' approach that cuts out historical facts to illustrate academic points, instead get into the gritty and ambivalent reality of individual lives. So Yoram's essay, 'At the Circus Backstage: Women, Domesticity and Motherhood, 1975-2003', tells the story of two generations of the Santus Family, focusing particularly on the matriarch Mama and her daughter-in-law Eva, using their respective and semi-occluded roles in the day-to-day workings of a traditional circus to reveal the consequences of its isolationism; while Jana's piece, 'Taming the Pain: Female Body in Circus Performance', relates a number of encounters with a brilliant, disaffected tightwire artist, Aura, as the spine of an essay about pain, the realness of the body, and the truthfulness of the performance image. Jana's writing also turns out the odd sentence like this, my favourite in the book: 'Stage fright (or better “ring” fright) right before the show, moments of quietness, total concentration on “here” and “now”, these segments all followed one another as on some kind of assembly line, creating a regular, but never monotonous rhythm of the everyday life.'

A couple of the other pieces don't work so well as straight transcriptions, and would perhaps have been better seen from the perspective of a report: Laura Herts-Gladys' in-character clown interlude; a corde lisse essay, 'The Roperesentation of Gender', by Camilla Damkjaer, which is further complicated in transcription by the fact that the lecture theatre at the last moment forbid the speaker/artist from rigging her rope, so she performed instead on the ground; and a photo essay by Rose English, 'Heavenly Horses & Exquisite Equestriennes', where the delicate thread of text is too bare and too fast without its accompanying images.

Each paper is given in Croatian and English, as are the captions of the many images. These little caption vignettes, sitting in the inside margin of the book on about half of all the pages, are a curious pleasure, variously covering biographical sketches—'Victoria Chaplin was born in 1951 under public spotlight turned on by her grandfather Eugene O'Neill and her father Charlie Chaplin. Gracious on the stage, modest in private life, this pioneer of contemporary circus never does interviews. Perhaps this media silence is the reason why her role in renovating the circus stayed in a historical corner – Victoria and Jean-Baptiste Thierrée founded their first circus company in 1971!'—little flashes of contemporary circus history—'After the huge success of the performance I look up, I look down... which had its international premiere at the Festival novog cirkusa and was later enlisted in the anthologies of contemporary circus performance at the beginning of the 21st century, the Avignon festival recognised the potential of Mélissa Von Vépy and for its “in” programme commissioned and co-produced Miroir, Miroir (2009). A large mirror hangs like a trapeze above the stage, calls out and denies encounter. The mirror is an object directly referring to many movies, stories, fairy tales and mythologies and provokes existential and sometimes horrifying questions related to auto-reflexion.'—and anecdotes: 'In the period of creation of the performance Après la pluie (Le Cirque Désaccordé, 2004) Fabienne Teulières had unusually strong dreams about wanting to become pregnant. There wasn't a potential father in sight, but this didn't stop her in creating the character of a pregnant woman walking on the tightwire while using a pillow as her belly. At the end of the creation period, she met a man and soon after the premiere announced she was really expecting a baby. During the tour of the show, three women artists had to be replaced because they all got pregnant.'

As some of the above quotations probably make clear, the usual disclaimer applies: the translation isn't always localised to the extent you might like. It's never unmanageable though, and I can accept a little blurring of the writing's complexity and fine detail in return for, well, the writing itself—this sort of book, for circus, is a rare and important thing.