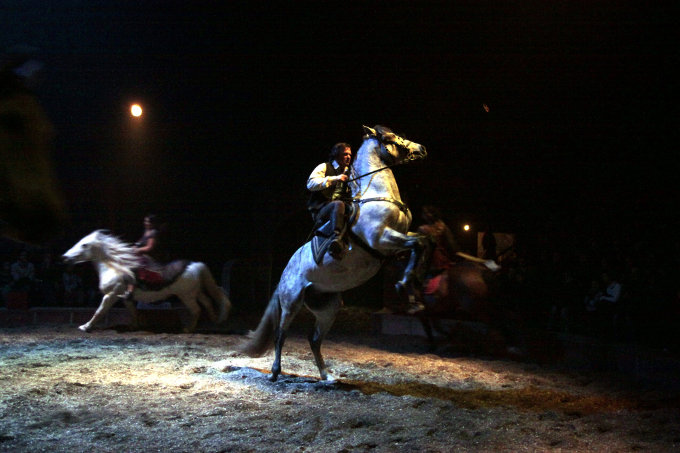 With a history of performance older than the artform they helped to create, where do the equestrian arts lie in contemporary circus performance? Former vaulter Thomas Wilson reflects on two recent performances...

Equestrian ‘performance’ holds a special interest for me. In my younger days I competed as a sport equestrian vaulter, a little-known discipline that shares more with circus or ice-skating than it does with the usual round of equestrian disciplines in the sporting world. Despite training at the time in theatre and dance, it was in equestrian vaulting that I first experienced the tangible feeling of ensemble and of a certain kinaesthetic sympathy with another performer – in this case the sympathetic bond between equine- and human-kind.

Horses have been a staple part of circuses from their inception by Phillip Astley in 1768, whose trick riding displays cemented the role of the horse in entertaining the public through the skill of a handler and the tricks s/he could perform. Horses have since been used both to display the raw equestrian skills of a rider and as part of theatrical or thematic scenarios. Although other animals may have dominated the 19th and 20th centuries, horses still maintained a solid position amongst the billing. Since the near-demise of the British animal-based circus, it is the horse that has sustained the animal presence in many modern examples of circus practice that can be seen in the United Kingdom today.

This summer has seen two European companies featuring equestrian performance visit the UK – Footsbarn (based in Auvergne) performing their new piece Sorry! at Victoria Park, Hackney; and InStallation (from Switzerland) at Milton Keynes International Festival. Both illustrate contrasting qualities of the performer's engagement with the horse.

«In sympathy with all of Footsbarn’s shows there is an earthiness to the character of the equestrian work; it resists the pomp and ceremony of many circuses and presents the tricks amongst the chaos of music and sound.»

Footsbarn, one of the grand old companies of the circus/touring circuit and now into their fourth decade of performance, continue in their inimitable style. Their latest production Sorry!, a collaboration with veteran performer Pierre Byland and with Cirque Werdyn, gives, in true Footsbarn style, the impression of a rather shambolic event as two ‘ceremonies’ collide. The dour Byland and his colleagues are mourning their maestro, whilst the anarchic Footsbarn are celebrating a wedding. Amongst this Cirque Werdyn make a number of appearances as acts human, animal and mechanical are staged.

Although Werdyn are billed as an equestrian circus there is only a modicum of horse work in this piece; instead the cynical clowning of Byland carries the majority of the narrative, with skits from Footsbarn and Werdyn punctuating the extended sketches. Werdyn’s horse-work sees a number of typical routines, mainly from liberty work, though there is some mounted dressage. In sympathy with all of Footsbarn’s shows there is an earthiness to the character of the equestrian work; it resists the pomp and ceremony of many circuses and presents the tricks amongst the chaos of music and sound. The staging of the sleeping horse and handler is a case in point: between two scenes of raucous upheaval we see one of Werdyn’s riders enter and put his horse to sleep, curling up alongside him. This standard trick reveals a masculine tenderness, presented in an unadorned fashion. For Footsbarn/Werdyn the characteristic is generally workmanlike, and the tricks are presented within the narrative, with a certain degree of rough aplomb, but the placement of the tricks does not drive or relate to the narrative significantly enough.

This runs through all the animal work, and in places the animals come across as stage ‘dressings’, in particular when using the smaller domestic/agricultural animals. This earthiness is of course well within the Footsbarn aesthetic – a mix of Brook’s rough theatre and the Elizabethan strolling player to which they clearly draw their lineage. This then is an uncomplicated relationship with the horse, one that looks to display man’s mastery of nature from an unequivocal perspective.

In stark contrast is the gently charismatic InStallation, a beautiful piece that artfully fuses contemporary and classic circus methodologies. The equestrian work is led by Niklaus Muntwyler and this has a delightful charm that comes across as uncomplicated and un-fussed. His own physicality is marked by a gentle equine incline of his neck towards his horses; and he controls them with gentle flicks of the air with his lunge whip.

«It is through the relationship of the human’s rhythm to the horse’s rhythm that we can begin to see the theatricality of a moment.»

What Muntwyler does is to display an ensemble equality to his work with the horses that has an ambiance closer to theatrical ensemble work, aided in part by sensitive lighting and musical accompaniment. In particular there seems to be no disjunction between Muntwyler’s rhythm and that of his horses, indeed his gentle sweeps of his arms serve as a delicate counterpoint to the pace and reactions of the horses, who delicately canter in ankle bells, or sweep their manes as they turn on the spot. There is no attempt to force the horse’s natural dynamic into musical or dramatic territory, but rather the dramatic rhythm emerges from the horse’s rhythm. This leads us to see the horses existing within the space as ‘themselves’ but appearing as a magical ‘other’.

It is the quality of the rhythm that is of utmost importance in Muntwyler’s work, as it is through the relationship of the human’s rhythm to the horse’s rhythm that we can begin to see the theatricality of a moment. Where many equestrian circuses tend to favour bold driving musical accompaniment and then attempt to match the horses’ strides and movements to the music, InStallation appears to work the other way. As in vaulting, there is a delicate exchange of control and response to be played out between human and handler(s). Where the handler might set a pathway for the horse and ask it to maintain a steady canter, the sport vaulter himself is left to execute his movements, accommodating the horse’s actions and rhythms, attempting to avoid unduly affecting the horse’s action. In InStallation it seems that this relationship plays out in the creation of the theatrical moments – Muntwyler guiding his horses whilst musicians respond to the horse’s quality. This sympathy is reflective of the overall qualities of InStallation, and hints at an increased sensitivity to the theatrical nuances of circus performance and the future place of animals in this.

Thomas Wilson is now an independent theatre artist and writer. He declined to send Sideshow images or video of his glory days as an equestrian vaulter.

Sorry! was performed 19 June – 4 July in Victoria Park as part of Barbican's BITE season. InStallation was at Milton Keynes 17-24 July as part of IF Festival. For further InStallation reading, see Sideshow's review or interview with Roman Müller.