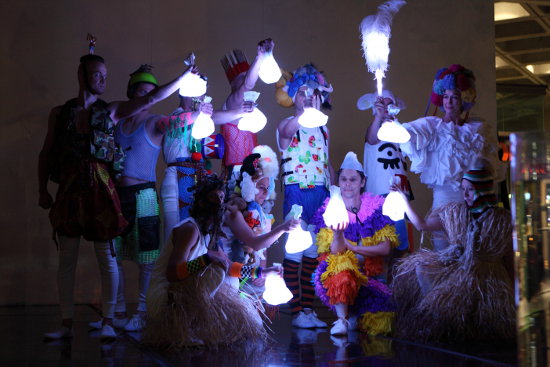 The Gandinis first approached me with this single, strong idea: they wanted to make a show with paint, where the primary idea was paint, and where they'd wind up getting messier and messier throughout the piece.

We had a meeting. I didn't know that much about the company, but they had a few references for the project: one was Bernhard Willhelm, who's this quite wacky fashion designer who also does a lot of costume work—like he did an amazing shoot with Björk for Dazed and Confused maybe a year, two years ago; and then the other idea was to make a tribute to the designer Alexander McQueen—they wanted to have one of their performers, Doreen Großman, in a white dress and splatter her with paint. It's an idea from a piece McQueen did where a model came out and her feet were strapped onto a plinth, and then she was twisted around on this central dais while robotic arms sprayed her dress with paint. I think they just loved the image—this idea of the pure white ballerina and then something so anarchic happening. It's violent, as well, in some ways, and I think they wanted to work with that aspect.

I liked these initial ideas because they were both fashion references and I come from a fashion background, and I think the company were really excited because I seemed to connect with their ideas and really get what they wanted to do. They had some stuff they wanted to draw on—they were picking out images—but then with other things I was able to run with ideas. I looked a lot at the Willhelm book, Bernhard Willhelm & Jutta Kraus, and then coming from that I saw some central themes that I could work with.

We had a month, and for the amount of costumes that was actually quite a tight period. You can't really make more than one outfit a day, at best. The process is design, amendment, then you go away and you shop, but when I brought them the drawings they seemed to connect with them so much that they said, We don't want to change a thing, and they decided to base the show around the drawings.

I think the show started off quite innocent, and that, even though it had dark undertones from the beginning, it got progressively darker and darker. I'd been sending them these e-mails about Clockwork Orange, and we'd had this discussion of whether it should be the boys spraying Doreen with paint. I liked the idea that I could put them in white boilersuits and it would be quite violent, but it wound up being the two girls that did the scene and it ended up, in a way, being quite beautiful as she got absolutely drenched in this black paint.

I think that something the Gandinis are aware of is that they're inherently funny; even when they're doing something quite dark, they're inherently really funny. That's what I liked about the costumes—they were so funny at times, even though there was that undertone of darkness.

They had quite a few late shows starting at 10pm every night, and so you'd always have this audience from the National Theatre building come pouring out midway through the show—a very different kind of audience. It was a wonderful moment every time: they'd come out during the spitting, when a group of performers were spitting paint down another's front.

Something Sean said was that before the dress rehearsals they went onstage to try out the spitting—doing it just with water to see how it would work. And when people saw it with water they were really quite appalled and disgusted—it was just grotesque—but Sean said it was a different response when it was done with paint. People found it a lot funnier. Because they could see the paint it somehow went from repulsive and disgusting to being a little more comedic.

One of the things I really liked and picked up on from the Bernhard Willhelm book was the raffia, which is this straw-like material. From the raffia I think I got this tribal idea, and that was one of references I kept returning to. I went on to look at this amazing book called Maske by the photographer Phyllis Galembo, and I started looking at her images; something about them seemed to fit this idea of a tribe, like an urban tribe, but something a bit deconstructed—with no rules almost.

I've never worked with jugglers before, and there was the added problem that they have to have their arms free and they can't have too much interfering with their bodies—around their thighs or their hips as well as the upper body. So there was that practical element that I was worried about, the actual working of the costumes, but I designed them and said I'd bring them to the company so they could see if there needed to be any amendments.

In the end, they didn't want me to change anything and decided that if one of the costumes wasn't easy to juggle in then they'd just give the person wearing it less juggling and a little more dancing. That ended up happening with Kim Huynh, who wore the big raffia coat, which was immensely difficult to juggle in. I discussed changing the design, but they just liked the look of it so much that they wanted to keep it. And I was so pleased because in the end Kim had some amazing moments—one in particular where the others, in a really tribal way, circled around her and she was dancing in the coat. The movement in the raffia was just so beautiful; that coat came to life in such a wonderful way.

That's a jack pyke balaclava. It's a type of camouflage. You can buy whole suits, everything you can possibly imagine in jack pyke: jack pyke underpants, jack pyke gloves... if I could have afforded it Jon would have been covered entirely in jack pyke.

Sean and Kati chose who was going to be wearing which costume and I think they chose really, really well. So Malte Steinmetz, who's the really tall juggler, wore this king costume; he's so tall anyway but with this crown on top as well he just looked remarkable. And obviously they're great performers, so they've really worked to bring the costumes to life. There's one section where Sean has the piñata suit on, and his head back with a pole balancing on his chin, and he has this donkey mask that he's pulled down to be like his face. He was shaking trying to hold the balance, the whole costumes was shaking, and it just looked so freaky. I really delighted in those moments.

This pom-pom hat was based on one the designer Søren Bach made for Björk. Björk was actually a really big inspiration for the designs—her costumes are just fantastic, and you can see there are a few Björk references throughout.

One thing that was really fun as well is that I've worked in haute couture fashion before, but I haven't really had much experience of making hats, and every single Blotched outfit has a hat. Most of them were made with these really old-fashioned swimcaps, the ladies ones with the chinstraps.

Their last show Smashed! is a family show—almost like a Pixar movie where it appeals to small children and adults alike—but Blotched is an adult, challenging show. I'd been really surprised because originally they'd discussed maybe doing the Doreen section with her topless; I was really taken aback that the National Theatre were happy with that and that Watch This Space's producer, Angus MacKechnie, had OKed it to have a topless section outside the National Theatre.

But it was actually me I think, with Kati's support, that ruled out the idea. I actually felt it would have been pointless, and maybe even a little gratuitous, to have her topless. It's much better that in all this colourful madness Doreen just sort of floats out in the ballerina costume and strikes a serene pose.