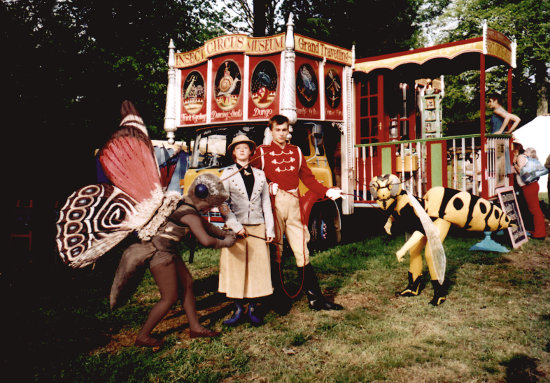 Mark Copeland’s career as a commercial model-maker ended when he won a BAFTA. The team he’d been working with was awarded for the cityscapes they created for the BBC’s Gormenghast miniseries—which aired in 2000, and which is still hidden somewhere in a corner of my memory as a place of strange angles and perpetual rain. But after the BAFTA ‘the phone stopped ringing’—people thought the company would be either too expensive or too busy—and at the same time interest started to tip toward computer generated effects and backdrops. As Mark explains, the lull in professional work was one of the catalysts for the Insect Circus:

‘I had all these skills making things, making fake things—making things look old or whatever and then no work in that department, and I had been working on paintings that played with scale. So for instance I’d have one of those old Singer sewing machines in a landscape with the fields going through as if it were sewing them up. […] So I was looking through a book of circus history and I came upon a picture of a lot of elephants on low loaders—this was from Australia, I think it was Ashton’s Circus—a motor unit with three of these things attached to the back with about six or eight elephants on. It struck me with this scale thing that in the world of small creatures snails and elephants are kind of somehow related. So the insect circus started with snails and they’re not insects at all.’

First were the paintings: Mark did a set of twenty for an exhibition at London’s Portal Gallery in 2002. A giant stag beetle closing its jaws around Mr. Maroc the Beast Tamer, two ladybirds drawing a pram with a clown inside, the Great Flingo outlining the fragile wings of a butterfly with thrown knives—the paintings were the foundation material for the world-building that came later. Mark: ‘By the time I’d done the exhibition I wanted to take it further and the idea of the Museum came up. I’ve always loved old horse boxes so I had the idea of having a kind of travelling gallery.’

Mark and his partner Sarah Munro got hold of an old horse box and started turning it into an old-style circus caravan, some of the ‘curly front bits’ recycled from the set of Gormenghast. Inside, the walls are covered in posters and hold circus relics in glass display cases—there’s an especially good case which is all about ‘The Peaple’, a Liverpool-based bug band. At child level there are push-button mechanical models which animate some of the scenes from the paintings, and which Mark says were inspired partly by the Cabaret Mechanical Theatre that used to be in Covent Garden.

The Museum is visually very convincing; there’s particular care and verisimilitude in the letterpress posters (‘I always loved the nonsense that was written on them—well, the way they’re worded, particularly the old ones: you sort of promise more than you deliver in a lot of ways, and that’s fine’). Mark says a lot of people are taken in, but different areas get different reactions: more people in South London thought the Museum was real than did North of the river; Manchester apparently had a very savvy audience, and in Ireland ‘everybody just knew it was a joke straight away’. Mark tells the story of one of the Insect Museum’s tougher audiences:

‘Sandy [Davidson] organised for us to go to the Circus Friends Association Annual General Meeting at Zippos Circus when it was on Blackheath, and they had about 50 or 60 circus Fans there, and they were kind of a mixed lot—some of them were circus model makers—there’s quite a tradition of making circus miniatures—and then there were circus historians and just circus fans and whatever. And so they kind of trooped in. I was expecting them to love it—or to have a response to it—but they all kind of came in slowly, in and out, and two or three people stopped to talk to me because they realised that it was what it was—and talked about the references in the posters and they thought it was fascinating, or funny, or whatever. But then lots of them were quite quiet and afterwards Martin Burn who runs Zippos said to me that some of them had come up to him and said, “So, how did we never know about all that side of circus history? Why’s nobody ever told us before?” A lot of them. I was very shocked by that—they’re the one group of people you’d imagine would get it straight away.’ It must have been very satisfying? ‘Kind of. I always feel slightly guilty when people take it too seriously. A little bit.’

After the Museum the next step was the show, an arch interpretation of a traditional touring circus that uses the characters developed in the original paintings alongside new additions: Tallulah the Worm Charmer, Dungo Son of Dungo, Ephemera the Evanescent Mayfly. Sarah makes the costumes for the show and also performs as Nurse Nursey, running a very funny puppet sequence that’s a dust mites’ tea party. The music ranges across continents and has a familiar, filmic quality while being, for me at least, unplaceable. Mark says it’s ‘music for armchair travellers’, drawn from a period between 1955 and the early 1960s when the world opened up to easy travel. ‘It’s perfect for what we do. We’re kind of doing a pastiche of traditional circus but also presenting things that are apparently from different parts of the world—so you can actually find a bit of Spanish music that’s been played by someone who’s probably never been to Spain in their lives.’ I suggest that it’s a little like circus—the way people who’ve never been to the circus still have ideas about it fixed in their imagination. ‘Particularly with the animals. One of the reasons for making it into a show, for me, was to try and conjure up the magic that you would have had with an animal circus in the past. These animals just take their costumes off as they go. But you still get a bit—I think particularly for children—they can be frightened of the flies or impressed by the size of the stag beetle—they seem to get completely lost in it. But it happens to adults too.’

Mark’s friend Sandy Davidson, Chairman of the Circus Friends Association in the past, came to see one of the first shows (‘you could call it a scratch performance’) at Hoxton Hall. ‘He really loved old-school circus, he loved the animals and he loved the tigers, so I was a bit worried. He’s used to going to Monte Carlo and seeing top performers… I was a bit nervous about seeing him afterwards to see what he said, and he was coming down the stairs and I asked, “Sandy what did you think?” And he said, “Oh, the tigers!” “You mean the wasps?” I asked. “Oh yeah yeah, the wasps… I was completely lost.”’

After a few successful years of touring, the Insect Circus has plans to expand. ‘It’s not the scale that we always imagined it yet,’ says Mark. ‘The snails is one thing that we’ve got to get: elephant-sized snails. You can see it in the Museum that you’ve got these giant snails and there’s a bit in the show where the Captain gets stung and his body swells “almost to the size of a snail”. I say that and there’s always absolute silence—they don’t know what I’m talking about at all! I say we wanted to bring our snails but the doors were too small to get them in.’

Having played to this point in indoor venues, Mark wants the Circus to have its own home. ‘I kind of have this personal feeling that we’re not really a circus yet—because we haven’t been in a big top.’ So the plan is to find one over the summer and take the Circus down to Devon and Cornwall. Will the tent be customised to fit with the style of the Museum, I ask. ‘In an ideal world I’d have an old canvas big top—totally impractical, because once they’re wet they’re a nightmare. Partly it’s the whole idea of—it’s not reality—but it’s how you might imagine things are like in the past. So even down to the lighting; I’ve always wanted to have this golden lighting which you imagine might be like candlelike, or they used to have these things ‘naphtha flares’—which apparently gave a horrid light but I don’t mind that. So I say to lighting people I want it to look kind of like it might have looked in the late Victorian times and they say ‘well you know those lights they were horrible, they were green’. But I don’t want the reality of it, I want what you imagine the reality of it was. Sort of golden, twingling.’

‘We’re at a point where we’re at a manageable scale. We could just keep it like this and tour it forever, exactly the same, but it seems to me things have to keep growing. Grow to survive. So who knows? Who knows.’