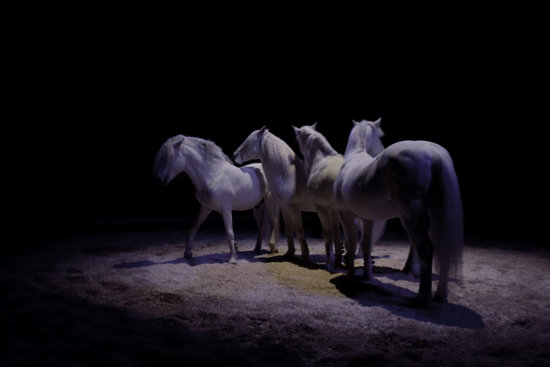 Roman Müller talks to Sideshow about InStallation, a piece that began life as a show put on for friends in the stables of Circus Monti...

We never really planned to create this show, or not the kind of huge touring show that it is now...

Maybe you know Circus Monti in Switzerland? It's kind of a traditional circus, and Andy and Nick [Andreas and Niklaus Muntwyler] come from the circus family Monti and they have rehearsal space there—Nick has a ring to train his horses and I also practise there with Nella [Petronella von Zerboni].

And so as we are mostly on tour in Europe, everybody with his own projects, and we almost never perform in Switzerland because it's really good for traditional circus but for contemporary circus there's really not a lot of things. So we thought, Why don't we just do a nice evening with friends to show them what we're doing? That was really the basic idea. Then we had musicians, they joined us, and we decided to perform maybe four evenings in the stables at Monti. We told the newspapers we were going to make a show, and then we practised maybe five days. And that was the basic structure of the show, and it worked so well that after these four days we started to promote a little bit more and found that we were on for four weeks and all the time full. Even then we didn't even think about going on tour—six horses and all this. But there was one producer who saw the show and said, This will go on tour. And then last year we toured one place in Switzerland and five places in France. About 50 shows. That was really a surprise.

It's still based on acts.

In these five days it was a way of thinking: How can you put things together or find a way to connect things? Moments like how to bring in the piano. In the circus often you have a lot of things you have to do, like bringing in the tightwire—and it's about how you can use those things, not hide them. If you bring in a piano at a certain point, then use the piano. At first it was just our act [Roman and Nella's diablo act] on the piano, and then if the piano is there then it's there. So what are we going to do with it for twenty, twenty-five minutes?

So the thing with the sawdust and the diablo [a sequence where Roman drops sawdust into the cup of a spinning diablo]. I never thought about it before, but then we were rehearsing in the space and the sawdust was there on the ground. We were just working with things that were real, that were there; often I don't really like the way productions will go far away to find ideas. It's different in theatre or dance. Because as an actor or dancer you learn to interpret something. In theatre you play a role that tells the story, but in circus it's much more personal, kind of black and white. In circus it's much more personal the way you practise—you do your technique and everybody has their own way to do it, and you look there to find what you can develop, what you can tell.

Instead of this theatre technique where you learn to interpret different things, you work much more using the personal way. And so maybe InStallation is based on the personal things—how Nick works with his horses there's no show, just the way he talks. We don't try to tell more than there is really.

For us it was quite important to stay close to the ambience that we had at the first performance—because that was the thing I think that really worked, this kind of roughness and decision to not try to tell a story. The moment we had the offer to go on tour we had quite a lot of discussions about what we were going to practise. Do we want to practise the music so it's really perfect with the action or are we going to work the characters? Where does it go? That was really a hard thing to decide and in the end we didn't practise too much; we decided it could actually go in a wrong direction if we tried to work on the characters or tried to tell something more than it was. So the goal was to try and stay close to the original version, but we had to find some new things because in the stables there was the ring, then two rows of chairs, then a second stage, more or less over the ring, and we had some games with Up and Down. So there were some points where we had to find solutions, or a kind of translation—how to take the show out of the place without losing the ambience that we had.

Maybe the aesthetic is this thing of not having time to create a whole show. It's not that that's a way that would always work, to make something in a real hurry, but I think for InStallation we never would have made it because there's too much difficulty about getting the money, and then it takes two, three years to make the show. Instead there's just this freshness.

And actually everybody was really surprised by the response we had after the first time we played. It's the kind of story that you dream about.

Roman Müller was interviewed 17 July following the UK premiere of InStallation at Milton Keynes' IF Festival, where the show continues to play until 24 July. You can read Sideshow's review of the show here.

Plans are to tour InStallation again in France next year; keep an eye on the show's site for details as they emerge. For more on Roman Müller's work with Petronella von Zerboni, and particularly for information on Le Cercle, a one-hour piece developed with InStallation's bass player Daniel Fricker, see here. Ulla Tikka and Andreas Muntwyler will later in the year be appearing in a tour of Les Colporteurs' Le fil sous la neige; their site is here.