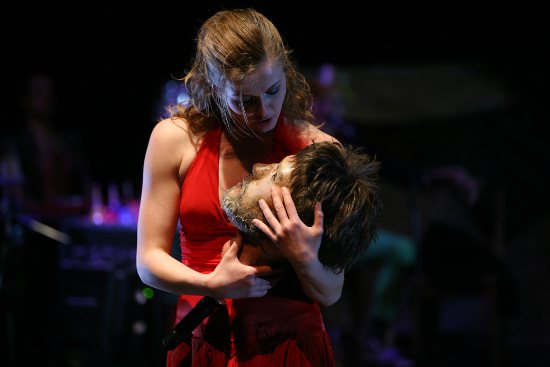 Sideshow talks to Rostislav Novak, the director of Cirk La Putyka, about his backgound in theatre, circus from a fresh perspective, and the destinies of barmen.

Could you say a little about your background as a director? What caused you to work with circus?

I'm not a director by profession, I'm an actor – as an undergraduate I studied alternative and puppet theatre. Since then I've been performing in several Prague theatres – a marionette theatre, the National Theatre – in experimental and alternative projects. In 2006 I co-created my solo performance 8 – Birds Black, Tits Great with the theatre group SKUTR. It was a show that mixed genres, with traditional puppet theatre, contemporary dance, acrobatics on trampoline, spoken word and projection. The whole show was a staged documentary about my family history, which dates back to 1775 and has links to the traditional puppet theatre. The idea to create a performance that could be called new circus, in Czech conditions, originates from that time, but I've been fascinated with circus since my childhood. When I saw Que-Cir-Que for the first time in 2001, my interest in the genre was renewed.

I read that part of the reason for your making La Putyka was to develop a Czech circus aesthetic that was distinct from the French mode. What made you want to do this? Do you see the new/contemporary circus scene as lacking aesthetic variety?

« Everything we did we did without any experience of contemporary circus. We had no background in the circus disciplines. »

No, but we've known from the beginning that the contemporary circus world has got a head start on the Czech Republic. For La Putyka I attempted to pull together a group of people who'd be interested in such a project and who'd like to try something new in our conditions, which are limiting on one hand but liberal on the other. Everything we did we did without any experience of contemporary circus. We had no background in the circus disciplines.

The circus scene I think is plentiful and very inspiring. However, you can look at the Czech culture, and the people devoted to pursuits other than theatre, and find them inspiring as well.

What would you say are the hallmarks or characteristics of the style you've created? What makes it Czech? What are its influences?

I'm not sure if I've created a style, but I know that during these last three years we've met with people who've seen not only La Putyka but also UP END DOWN (our second show), people who have 15 years experience or more in new circus, and they appreciate the way we leap into the circus disciplines and the way we look for new opportunities – and the way we put our own mark on the work, our own style. Every performance consists of circus technique, marionettes and contemporary dance, but story, human destinies, fantasy and philosophy are part of it as well. I've been influenced by my family and by Czech tradition: Josef Krofta, SKUTR, and the people from Cirk La Putyka as well, who continue to inspire me.

It seems that you're using other disciplines/artforms – puppetry among them – and I was wondering how you approached the integration of these different languages. Did you train the circus artists as puppeteers, or bring in artists from different backgrounds?

In Bohemia there are no people with professional contemporary circus experience, so Cirk La Putyka is assembled from professional puppeteers, dancers, actors, sportsmen – but we also have in our team a fashion designer, an international relations student, a folklore dancer, etcetera. They all got a chance to experiment with different genres – the athletes went through different dance training sessions and acting workshops; dancers learned acrobatics and to perform with puppets. It's a good mix.

None of us are circus performers par excellence – at least none of us were three years ago. Now some are very close to this, as some have dedicated themselves to training full-time and to working new disciplines like teeterboard, vertical rope, straps, aerial silks, Chinese pole, aerial ring. All of these were in UP END DOWN, and as a group we're also training Russian swing and Cyr wheel.

It seems like you've got a large ensemble for the show. What was the creation process? Did you devise with the full cast or 'script' things beforehand?

Every project has started a slightly different way. At the moment we have at least three projects, and later this year another two projects will have their premiere. Every one of these projects is unique, and has had its own journey directed by experimentation and what we've leaned along the way. La Putyka is theatre which uses different expressive means: our trampoline performers didn't know much about theatre or any other movement form, and that's why we had them attend Argentinian tango lessons. One of the hand-to-hand acrobats in the show had little experience in the discipline at the start of the process, and the other had no experience whatsoever. So many times we were exploring the technique and training the technical elements at the same time as we were drawing a dramaturgical line – which for this show has evolved around our La Putyka, around barmen and the destinies of people who can meet each other at a pub. We draw from much authentic experience and many adventures. For example the closing song was written by my father when he was receiving treatment for alcoholism in rehab. In Bohemia the song has its own magic, an unworldly quality, but also a great depth, describing what else, apart from cheer, alcohol and its demons can bring to a human being. I wonder how it's going to work in English...

What's the circus scene like in the Czech Republic? Are there many companies? Is it focused in one particular area?

There’s a long tradition of clowning in the Czech Republic: Ctibor Turba, Bolek Polívka, Boris Hybner, etcetera. Many theatre groups draw from the poetic circus of the Forman Brother's Theater, and there are lots of companies that, to a certain degree, utilise aspects of the circus discipline: Continuo Theatre, Décalages, Cirque Garuda, etcetera. We have two annual circus festivals: Letní Letná and Cirk-UFF, where you can see, at the very least, the tip of the European new circus movement. Centres and institutes of new circus are developing, and the main thing is that people are interested in attending this sort of performance. The one thing we we could all really use is some support from the cultural policy-makers in the Czech Republic. It all kind of depends, to a certain degree, on that. There are no real circus specialists in the country, and there is not a whole lot of variety among the disciplines, so that’s why Cirk La Putyka is making the effort to connect with people from all over the world, collecting experiences and then finding ways to use them in our own performances.

Why did you decide to make a show about pub culture? What research did you do? How does circus lend itself to the subject matter?

« They sit there, drinking their beer, silently staring, and brilliant thoughts are just running through their minds. »

I feel that the circus is growing more and more free and varied. I get excited when I manage to think up a new project and then can find new ways to achieve it. The pub culture idea fell out of the sky, actually, when I was sitting in Edinburgh with a colleague – an actor and director. We said to ourselves, 'Let’s find another way. Let’s try doing hand-to-hand acrobatics counter-intuitively: acrobats without athletic builds, breaking down the steps in slow motion. The ideal would be to have two fat geezers, ex-gymnasts, who would be sitting at a table, drinking beer… and that’d be it. Let’s try making circus work in the pub, in a typical Czech environment, where the ideas for so many beautiful books, films, and plays have been conceived.'

I have my own experiences with the pub; some things about it fascinate me, other things I can’t stand. For instance, the violence. I do love, though, how some people in pubs spend so much time talking about what they’d like to do in life, but then they crawl out of the pub and they don’t do a thing. Or the other way around: they sit there, drinking their beer, silently staring, and brilliant thoughts are just running through their minds. It’s a world within a world.

If you've created this Czech style of circus, do you feel that it's something that will be carried forward in your future shows? I read that you're going to be working with Maksim Komaro on a new project, and particularly I'm wondering how you're going to reconcile your two styles. Mozart is a long way from pub culture – or is it...?

If Maksim didn’t like the group of people that comprises Cirk La Putyka, then there’s no way he’d want to work with us. That’s why I think that our very meeting is, I hope, enriching for both parties. We really haven’t invented a style; we don’t even claim that. We just want to find venues for the potential of the people that make up Cirk La Putyka.

We’ve been invited to participate in the project La Crime, where Cirk La Putyka will work alongside Daniel Gulko and Cahin-caha, Cirkus Cirkör, and Circo Aereo. This is just incredible for us. It’s a massive, propelling force, where four different styles, nationalities, companies, directors, and performances will all converge.

The La Putyka show is set in a pub environment, but our other performances take place in other worlds. UP END DOWN is a show about the angels among us, about how each of us has our own angel and our own heaven, and the story's about one person’s death, angel and heaven. Then we have the performance A Cirkus Bude, which is four fairytales from the amazing surrealist author M. Macourka; it’s a show for kids and their parents.

I think we have a broad palette, even if some people might have a problem with pubs in particular.

And other than that, I think that, for some people, the pub culture really can be like Mozart...