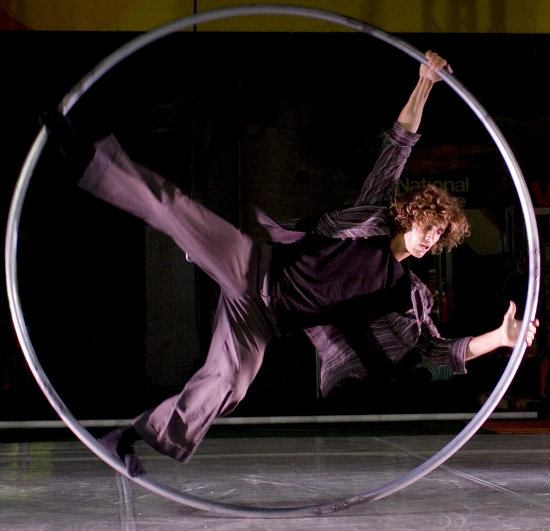 A scandalised woman in front of me is reaching round to cover her son's eyes as Marilén Ribot, wearing a knotted corset of rope, struts back and forth to a disco beat. Naked underneath, she teases the rope away while the audience reacts variously with: laughter, mild shock, bafflement, and (probably, covertly) arousal.

I love that Watch This Space programmed this. Situated in the Square outside the National Theatre, it's a festival that has its fair share of dedicated attendees (many of them families), but it also has a large accidental audience: senior theatregoers as they emerge from a play at the National, overspill from the adjacent BFI, curious tourists arrested from their walk along the South Bank. Atempo isn't really very risqué—or, as it markets itself, 'impure'—but at times it carries a cool and dissident attitude, funny at WTS in a way I don't think it could have been when the company were at Glastonbury. (The best thing, whether by accident or affront, was that the National Theatre bookshop's automated blinds began to lower the moment Ribot disrobed.)

A full-length street show, Atempo essentially structures itself around three excellent solos. On Chinese pole Miguel Soto's expressive vocabulary seems to work outward from the rhythm of breath, drawing images that evoke in- and exhalation as he climbs and falls, entranced perhaps by the woman or spirit who matches his gestures from a high and distant perch. Matias Marré gives by some distance the most exhilarating and theatrically complete performance I've yet seen on Roue Cyr, one that reminded me of learning how the apparatus' originator, Daniel Cyr, performed an act where the creative seed was that the wheel was his horse. Watching Marré run the turning Cyr over his hands, or push it back with only his forehead, the clean circle of the metal an antagonist to his long and angular body, there seemed to be so much truth in the personality of the wheel as a separate will, the artist existing in a fluid and interpretive relationship with it. And, finally, Ribot, having dressed behind the token modesty of a diaphanous black screen, is mercilessly captivating as she performs cloudswing very high on the WTS rig, flying up and falling through the square of onlookers on the first floor balcony, giving that sensation of resonance and amplification that comes when you are a part of an entirely attentive audience: a powerful thing.

I think if you asked the company they'd probably have the sketch of a plot ready for you—something perhaps about encounters between strangers and the blurred double-world of reality and dreams. In short, stuff you've heard before, and Atempo's only real faltering step comes in literal depiction: a two-man-one-woman contact-acrobatics sequence feels, unlike nearly everything else they do, like it could be performed by any company and belong to any show, the three haring around the stage-space, jumping into one another's arms and flying apart: the meerkat approach to characterisation. That excepted, the performance excels at using its transitional phases to shift the mood of the piece ready for each new scene/skill. Following Soto's solo, the three charge the pole repeatedly, finally knocking the base out and carrying it back so that one end rests on the NT Square and the other is suspended from a cable a few feet off the ground. Setting it swinging back and forth like the boom of a sail, Marré and Ribot perform a duet underneath that's dictated by its gentle parabola, perfectly reflecting the shift from the rigidity of the Chinese pole to the more responsive character of the Roue Cyr. I don't think there's really an explicit narrative embedded in the scene—or in the next transition where Ribot breaks the poetic mood with her unanticipated nudity—but that's to the show's credit: it's when it moves on instinct that it finds its own way.