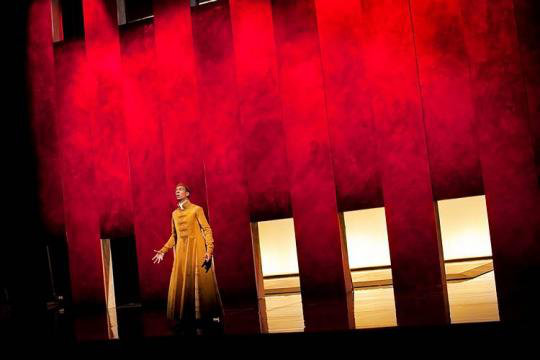 Following the collaboration in 2007 with Improbable on Philip Glass’ Satyagraha, the ENO have now turned from puppetry and devised theatre to circus, bringing in Daniele Finzi Pasca (Cirque du Soleil and Éloize) to direct a staging of Kaija Saariaho’s L’Amour de Loin. Each of the opera’s three characters is given two acrobat performers to represent their spirit and dramatise their thoughts and emotions, with tissu, ground and wire work and capoeira some of the skills on display.

In practice it doesn’t really pull together, though you can see why the attempt was made. L’Amour de Loin has a thick, dour plot unleavened by opera’s best buoyant excesses of cross dressing, identity swapping, villainous dwarves, etcetera—all absent in the (drawn slightly from history) story of French prince Jaufré Rudel. He is tired of worldly pleasures and becomes entranced by a travelling pilgrim’s description of a countess from over the seas. Without ever having met her, he falls in love with her, crosses the sea to find her, experiences doubt, and dies from sickness shortly after their first meeting. Minus the ending its roughly a terrible Internet date.

So then: three characters, a spare plot, and no action—just dialogue and monologue. There’s possible perceived value simply in the visual attractiveness of circus, and the production certainly goes all out creating hyperbeautiful sets and effects elsewhere: big blocks of primary colour photoshopped to max saturation; a garden of suspended lights; lots of scenes with billowing fabric (there’s a great start where a rushing watery sheet drifts down from above the audience). But also the circus spirits are intended to compensate for the thinness of the characters and their motives by extending the dimensions of their inner lives—an ambition which I don’t think is fulfilled. Though the spirit doubles dress the same as their physical anchors, there’s no real link between them—and the interpretation doesn’t go much further than background capoeira for moments of doubt and turbulence. This detachment is irrespective of the strength or weakness of the circus elements as individual presentations of beauty or physical skill; they don’t work in context. How much enjoyment audience members can derive by singling the acrobats out for full attention will obviously vary, but I think they don’t have the space to ever really shine on their own merits: mostly a girl just gets floated on to do splits, floated off. It’s an indicator of this opera’s queer and needless reticence: the wraps happen offstage; you never see anyone climb.

Something is wrong inside the production: each part works alone, but the wheels don’t fit together. Jami Reid-Quarrell and Robyn Simpson are shadowbox puppeteers who depict sea crossings between acts—these vignettes lovely themselves, though typical of an implacably minimal opera that all the action, the travelling, should be reduced to shadow. These two characters play for laughs sometimes, and have a presence that waivers between invisible puppeteers and clowns—it’s not dramaturgically clear enough where they stand in relation to the core opera and exactly what they are when they’re on stage. Also misjudged are the insertions of visual imaging company and ENO collaborator Bashiba. At the start of Act IV a projected sea forms from wire meshes of geometric shapes—a digital, algorithmic aesthetic (it reminded me of Darwinia) that can be appreciated in itself but has no right place in the medieval era established by L’Amour’s costumes/libretto.

The opera’s not without pleasure, but its scarce, and there are only a few touches in Pasca's direction that really transmit, such as when the chorus come on stage with mirrors and reflect beams of light up and out as Jaufré passes to the next life. In a way the opera finds its measure in death, and the interrelations of body and spirit finally make sense: after Jaufré has died his spirits stand unmoving, and are picked up and carried off, one after the other, by the shadowbox puppeteers, agents in the end of fate and the theatre.