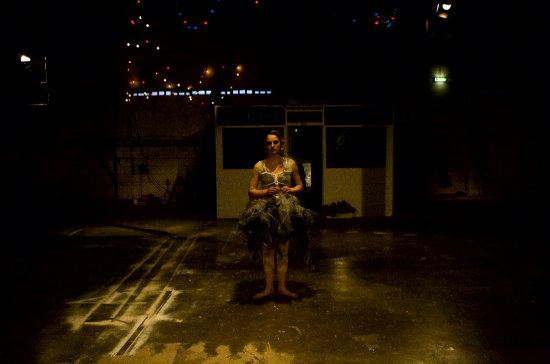 Wayward children, lost lovers, murder, cannibalism(?), suicide to protect another, madness--Cirxus is a multi-strand distributed story where the audience are free to walk about the performance space--a warehouse round back of the Arcola’s main theatre--encountering characters who themselves move constantly, following separate tracks that complexly intersect. There’s no way to see everything in one performance (although the action is looped and most things happen twice), and narrative resolution is, as with a lot of free ranging shows, replaced by moments of focused dramatic energy or coherence--a method that tends to work best with stories that are about memory, or have, at least, an absent, sad or memorial quality.

Cirxus takes as its starting point the Windscale fire and interprets it through the lives of a traditional 50s circus--there’s a ringmaster and a strongman, a ballerina and a clown. A woman in a blue dress moves silently through the room, clicking with radiation. Things don’t happen so much as people are affected by the currents of things that have happened and will happen. So there’s a knife that is passed from character to character, which as a visual sign and implicit threat automatically shifts the tone of the holder’s presence, but seems also to drop them out of the show’s wider actions and put them in a state of slowed-down introversion. To my knowledge it's never used. (I think that an interesting route through the show, and one I’d perhaps take if I saw it again, would be to follow the knife and watch it change the people who come into contact with it.)

In tackling the Windscale fire Cirxus is perhaps less interested in the facts of the case than in the allegorical potential of nuclear disaster as an event that, by dangerous radiation, prohibits access to the evidence of its own happening. The ruins of a nuclear site have a special sort of status: the only life that remains is that which is left in objects, or that which objects remind us of. Some of Cirxus’s nicest touches are the creation of objects that have a similar resonance within the show itself: I watched one character stacking a small tower out of playbricks--a simple thing, just bricks atop one another--and after a while left; when I came back later the corner was empty but the tower had gone and in its place was a complex suspension bridge built of bricks and playing cards. Another time I came into a schoolroom--it was my second visit, and the contents of the room were the same as the first except now there was a stack of childlike drawings. The third time I visited, after the show had looped, I entered halfway through the process: a teacher was sitting at her desk and perhaps half a dozen audience members were arranged around her using crayons to draw pictures. Whenever someone finished one they would hand it over to the teacher and she would appraise it and write a small encouraging comment. Every picture was of a man, except for one girl who drew an umbrella; when she handed it over everybody laughed, and the teacher wrote in the margin ‘I like people who can think outside the box’. I continue to torture myself trying to reverse engineer the box.

To say these things are ‘mysterious’, or that the show is ‘like a puzzle’ isn’t wrong or unfair but descriptive only of its surface interactions, and of the typical response of nerdy completists like myself. I think that underlying the desire to know what something means here is the sombre recognition that you can’t--in the frame of nuclear disaster, the contextlessness is a reminder of stopped life. I’d be interested to know more about the reasoning behind choosing the circus/carnival setting for the show--I think probably it has something to do with the fact that small travelling circuses have disappeared from most people’s lives but remain incredibly potent and entrenched in the general imagination.

How well all this comes together I’m not sure. Mileage obviously varies for each audience member, but I found Cirxus uneven in generating a strong tonal character, and felt that the two subject matters didn’t quite join in the moment of performance. I felt also it was cramped slightly by the space (when one of the characters runs off there’s not so much of a need to chase after them--they’ve nowhere to run to) and that the space itself wasn’t such an interesting one to inhabit, in terms of its layout and architecture, being essentially laid bare and divided boxily. I can certainly see an intellectual argument that the spatial limitations are appropriate to the situation and the stuck psychological loops of characters who are all waiting or lost--but this is an afterthought rather than an unravelling of the event as I experienced it. I think it could have done more with a larger space.

I’m sure that a lot of theatre companies are sick of being compared to Punchdrunk, and while Cirxus has some similarities and what are probably marks of influence, the style of the performance is different: no site-specific dance, more speech. I missed the dance, for its own pleasing qualities and for the work it does in activating the building as a metaphorical landscape the characters inhabit; and I occasionally had difficulties with the prose, which was fulsome and weightily symbolic and often carried (intentionally) symptoms of madness. I couldn’t always follow. Again, this is perhaps appropriate, but I felt a touch frustrated, and fantasised briefly about experiencing the show by sitting down with the full script and a diagram, calling in the actors to perform sections whenever I felt it needed the augmentation. My favourite moment in the show, and the only one I couldn’t really have experienced any other way, was when the Cirxus strongman, Koca, was staring into a fractured mirror and whispering to himself. No one else was around so I sidled in close and listened to something garbled and repetitive. He ignored me. After a while I turned to look away at two women, across the space, and as I did so Koca turned also and, suddenly cogent, talked to me, to himself, about what we were both seeing. It was genuinely dramatically thrilling; not so much because it was a one-to-one encounter, more because there was a queer distorted sense of being removed from the action while simultaneously engaging with it deeply, and, in the eyes of Koca, of being there and not there. It was such a powerful strange sensation that I had to remind myself to listen to what he was saying: he missed someone, even though she hadn’t already gone.