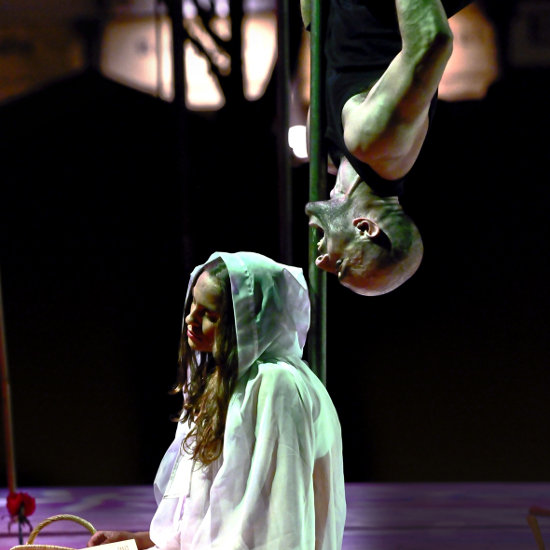 The wolves are very good. Otsoko is Gaitzerdi Teatro’s fire and circus remake of Little Red Riding Hood, and its first point of deviation from the original tale is to have a whole pack of wolves, these depicted by the snarling, loping cast, using crutches as forepaws and wearing muzzles and long dark coats with the spines picked out in lights. At the beginning they spread out and climb over and among the audience, looking undeniably wolfish but having also some of the cowled stalking intelligence of nazgul, extracting some squeals from the people (mostly girls) they snuff and rub up against.

The on-stage work isn’t so engaging. Otsoko’s relationship with its source material is one of visual and structural suggestion—clearly it is Little Red Riding Hood, but don’t expect it either to resonate strongly with the well-documented understuff or to alter your understanding of the original story. As a parade of dark, fiery images it’s moderately successful—grandma’s rocking chair is a gothic, high construction, like a small segment of an immense spoked wheel, that is rocked and overturned by the wolf pack; the branches of the forest are angled sticks threaded through the stage, the flowers are thrown darts; the wolves and Red climb trees (vertical poles) for vantage and escape. Some of it is eye-candy, close to the high surface gloss of a 90s pop video. There’s an especially shameless scene where a wolf comes on with a backpack and pressure hose and Red (in hot pants) is sprayed down with water, and sometimes it seems that the opportunity to show-off overrides the integrity of the story (before they even don their costumes and characters, the performers playing Red and Grandma come on stage and spin on two poles, smiling lushly at the audience, posing).

It degenerates towards the end. Despite a horribly over-enunciated voiceover (‘lots of red apples’) there’s little sense of narrative progression, and when the stage flies apart into its constituent squares, Red lost and stranded in a distant corner of forest, it’s difficult to feel much of anything as the pack closes in.