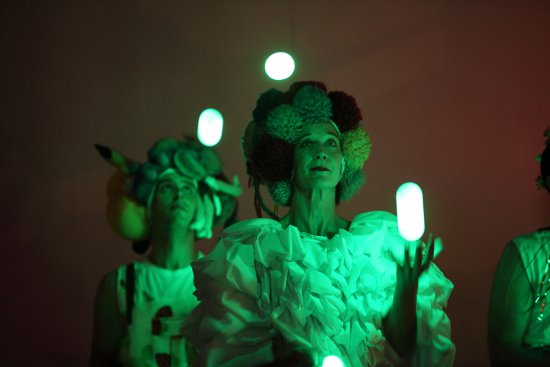 The company, eleven of them this time, thread through the crowd. Sean Gandini comes close and rustles past looking like a piñata, his voluminous, papery coat and trousers layered pink, purple, yellow and orange, with a turquoise band settled at the waist as the cummerbund of this evening's attire. What looks like perhaps a peak cap resting on his head will later reveal itself to be a semi-realistic plastic donkey mask. Elsewhere, the other members of the troupe are picked out among the dark crowd by these small sacks, carried by hand, that emanate a soft, whispering light. I can see grass skirts, aprons, lei garlands, mouse ears, string vest nets used for vests and not-vests, elbow guards, calf-length cheerleader socks, and a particularly striking hat sewn together from plush toy animals (+ a Pikachu) like a Katamari Damacy ball. The colours are chemical azure, hardhat yellow, orange, pink, various day-glos; patterns range across khaki, cheque, stripes and rich coral-like African prints. The company converge on the stage for a group shot, and it looks, sort of, post-apocalyptic—in that way that humanity has forgotten the meaning of its own signs, as though there was a huge tidal wave and this kitsch is all of what washed up of civilisation.

It's an aesthetic which on first sight felt to me like the lingering influence of director and chaos lord Maksim Komaro (who the company worked with on Motet), but I read after the performance that Blotched was devised based on a series of illustrations by costume/fashion designer Gemma Banks, that these were in turn inspired by the work of Bernhard Willhelm and Alexander McQueen, and that the idea had been to work on creating a piece from images rather than starting with a thematic framework and using that to develop the visual language of the piece.

What you see on stage has some of the same characteristics I think as improvisation or, say, sound poetry: images are decoupled from literal or sequentially-derived meaning, and instead you're placed in a state of disorientation—one that makes it all the more startling when the piece's intangible, sliding elements suddenly, and for just a moment, click together. A melody, a sound, an image—it might feel uncanny, or sublime, or unsettling, or familiar, but these are smuggled-in, bootlegged feelings: strong stuff of unknown provenance. For me the finest and strangest moment in Blotched was when a lone male juggler is circled by female members of the troupe who spit paint down his white front, this act accompanied by Elvis singing one of the immortals, Always On My Mind. It's hard to say why it works, and even if I knew I'd probably prefer not to.

Elsewhere in the piece the images, for me, streamed by a little inconsequentially. As the costumes come off to reveal simple white outfits beneath, the show uses paint as its central medium—one man juggles clubs under a long line of red liquid spouting from a can another holds high above him; a woman has her white dress sprayed with paint fired from syringes; the stage becomes wetter and wetter. I'm widely, risibly ignorant of visual art, even more so of fashion, and sense that there was a fair amount of allusive game-playing that was sheared off by the narrowness of my view. But I also felt that by aligning itself with the techniques of absurdism and aggressively deconstructed visual art Blotched overwrites the character of the performers—by which I don't mean the assumed, narrative 'characters' (there's certainly no trace of them, and good riddance), but instead the particular quality of a performer's individual presence, their physicality, their life, all the things which make them more than just the actors or components of an image. I think the audience struggled with this, and with an ambiguity of tone which vacillated between humour and existential misery (not a bad combination, but it needs a rhythm). In a way it seemed as though they'd taken the playful dissonance between the ultra-serious and the fundamentally ridiculous that made their last show Smashed! so delightful and turned all the dials into the red zone. The end of the piece, which sees the company writhing in Guernican agony on a paint-soaked floor, isn't so ambiguous, but by then the audience seemed unsure to the point of unresponsiveness: OK, but what is it?

Right now Blotched feels to me as though it has a few very interesting lines of thinking—about analogue and digital imagery, and abstract meaning—active within a formalistic sort of interest in composition and colour (there's a quite lovely scene where the cast walk in sequence across a white canvas, drawing juggling clubs and batons in circles which leave faint marks—nothing else), but also like there's more ambition, more idea, behind Blotched than the performance I saw quite managed to contain or use. The word 'experimental' is muddy and insipid, but here's a performance that redeems it—one that's in search of something new, that's a research process without a predetermined outcome—and it's a great commendation for Watch This Space that they support this sort of theatre year after year. The Gandinis continued to work on their commission from 2010, Smashed!, after its initial showings, and presented it again at WTS this year in a revised, longer version. With Blotched there's more to do I think, but I'd love to see it come back.