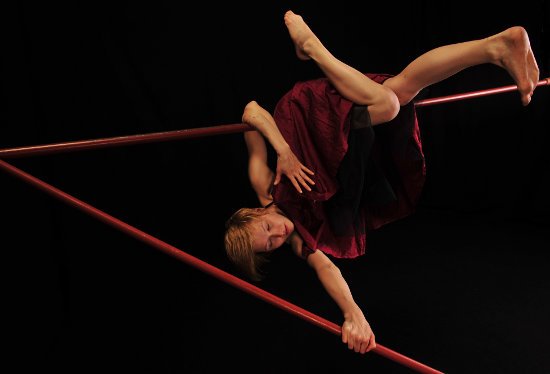 Ilona Jäntti is a tremendous aerialist. She’s been in circus a long time and has the consequent deep well of physical resources, but it’s style, really, that sets her apart: graceful but not too-clean, having an all-body approach where elbows, teeth, anything can be used to keep her in the air. Crucial to the theatrical make-up of this triple bill is her considerable and chraracterful attractiveness, kind of serious and shy, which sits very differently from the sexiness of—say—a burlesque artist: she has something beyond herself to exhibit, and her own attention is focused inward to the work she makes. It’s odd. I’ve seen her before doing pure skills pieces—acts where it is just her and a rope, her and a hoop—and her charisma is luminous; here it is too, but the effect is much more complicated and fragile. Basically when this triple bill works theatrically it’s great; the times it wasn’t working, I didn’t feel bored or inattentive, but queerly guilty. Guilty that watching a triptych of circus performances embracing other modes/techniques—animation, live music, and light/sound design, respectively—I wanted to watch something that had none of these.

The first piece, Muualla, featuring animation by Tuula Jeker was my favourite. Jäntti walks on all-fours across the stage, casting a shadow on the back wall, and where she pauses the shadow freezes momentarily to her shape, morphing then into a cartoon-y monster that comes alive and rushes away. It’s whimsical, light, and in its overall tone closest to the intrinsic qualities of Jäntti as a performer, curious, unconcerned, taking pleasure wherever it finds it. Next up, Cel trod familiar ground, matching aerialist with live musician (in this case cellist Jo Keithley) and putting them in an ambiguous, sometimes aggressive, relationship where music forces movement and vice versa. It wasn’t badly performed or conceived, but I’ve seen this set-up too many times, and the interaction between the two performers didn’t run deep enough to fully engage or convince.

The last of the triple bill, Footnotes, had a custom piece of equipment: what was essentially a low trapeze, but with an uncovered metal rod for a bar that was perhaps ten feet long. There was a second identical bar that was unattached to anything but was propped against the corner of the long trapeze—precariously so that it could slide to the floor if disturbed, which it did, on several occasions, crashing down very loudly as Jäntti made difficult journeys back and forth along the hanging bar. It was austerely beautiful, yet difficult to grasp much of whatever psychology it was meant to dramatise. I looked to the programme notes for help determining the origin of the piece, but they were giving nothing away. The sound—not exactly music—that accompanied Footnotes seemed to establish the second free rod as having the properties of an antenna, but rather than arising from any particular metaphor it felt more as though the piece had been discovered within the strict arbitrary limits of its apparatus: so then what on earth are we going to do with this? It summarised in a way how I felt about the whole triple bill: it felt like a try-out, which isn’t a criticism. It’s evidence of an artist trying to push her practice further, and that in itself is something to attend to.