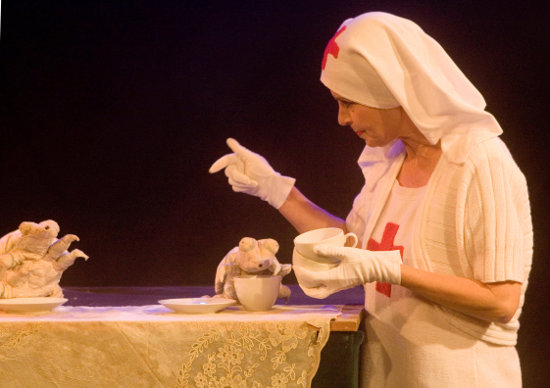 The great pleasure of this circus is the microscopic detail that has gone into the production of everything from its old letterpress-style posters to the £1 souvenir programmes that are hawked pre-show by Nurse Nursey. These things actually came first, before the show: founder and ringmaster Mark Copeland exhibited a set of paintings at the Portal Gallery in London that depicted giant performing snails rolling into town in the trailer of a circus caravan, aerialists suspended from butterflies, a wasp navigating a slack rope, and even some rare historical documentation of the gladiatorial contests fought against giant scorpions in Ancient Rome, of Chafer beetle baiting in Tudor England, and, particularly striking, of Mr Josia Banks standing perilously atop the saddle of a speeding rove beetle.

At some point the exhibition evolved into an installation (which I never saw although I own the Circus Box that accompanied it: a sweet little collection of curios including postcard replicas of Mark’s paintings and a booklet printing of A True History of the Circus Menagerie by Shandy Banks) and finally into a fully fledged show with Mark as the ringmaster. So here live on stage we see Maroc the Beast Tamer locked in mortal combat with a huge stag beetle (which, in a moment of genuine drama, comes rushing up the church’s central aisle propelled by three pairs of legs); Ephemera the Evanescent Mayfly (replaced and trained afresh for every show as each Ephemera perishes at the end of her act); and Nurse Nursey and the Mighty Mites (a very simple and funny sketch where the good Nurse does her best to housetrain and civilise a trio of glove puppet dust mites).

I think it’s fair to say that the circus skills on display—mostly in aerial disciplines—weren’t the highest in the land, but it’s not the sort of show that relies for its appeal on the entrancing quality of its performers’ incredible strength or dexterity—and, too, in the same way that it is a funny take on the traditional animal circus, the Insect Circus is also wryly self-aware of the theatre and hyperbole that goes into the presentation of physical feats. This doesn’t mean they purposefully do it badly; in fact the opposite: the performers exhibit total conviction, such that the audience is captivated watching nothing more than a woman pretending to play a wood pipe while a charmed earthworm rotates slowly up from its basket (I am of course talking of Tallulah the Worm Charmer).

What really comes through—via the homemade aesthetic and the souvenir programme and the narrative and thematic continuity of the original insect concept—is a feeling of warm communality that fits very well with the model of a circus as a group of individuals who live together and work together and in the end look out for each other. I thought Mark Copeland was a great ringmaster; I liked his twisty introductions and relaxed showmanship, but what really clinched it is that whenever I looked over at him mid-act he would always be utterly absorbed in whatever was happening onstage.

It’s fun and lively. It’s serious about being silly. It gets it right.