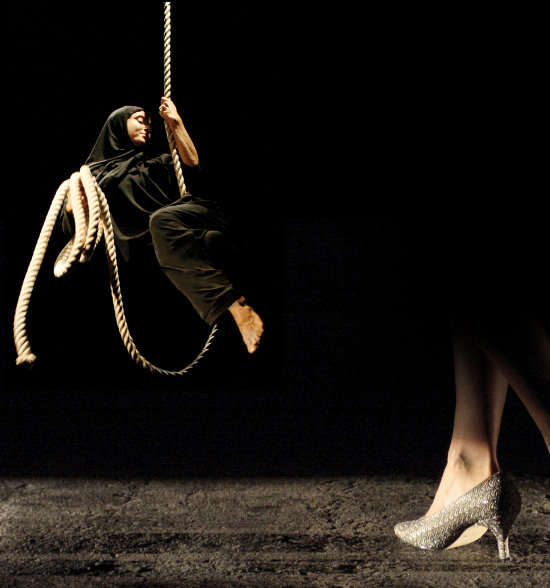 After seeing What If... and feeling a little as though I'd skidded over its surface, I dug up an old interview with creator Layla Rosa where I asked her about the show, at that time mid-development prior to a performance in Normandy at La brèche. Perhaps it's unfair to quote it months later when the piece might have changed in the eyes of its creator, but I think that Layla's description of it as 'like a series of little essays on the subject of veiling' still holds true.

Extending roughly from the what if premise of what if Layla had known her Saudi Arabian father and grew up under different cultural conditions, the piece is less committed to a thorough exploration of that scenario than a strategy of dissonance and subversion that unseats any single narrative before it can dig in. Opening with a sitting, veiled Layla singing an excellent cover of Cole Porter's Night and Day (definitely closer to the night), it moves through states of romantic longing, fear, restriction and release as Layla, dressed in a black hijab, becomes doubled by Megan Saunders, who wears the diametric costume: jeans and a bright yellow raincoat.

It's more reflective of than responsive to the matrix of ethical/political questions that surround the veil, and so we get an aerial dance where a low bar of light illuminates only the feet, golden-heeled, as they skim across the floor; a literally reflective encounter between two women divided by a diaphanous screen; a swinging trapeze routine, in hijab—with the roving interest and diverse languages joined for the most part by the music. Substantially the work of Shunt associates Ben and Max Ringham, What If... features a soundscape that has that particular scratchy, intimate sense of the cosmic (something you only really get from music, and then only from music that's gestated on a laptop), seeming to move from space into a forest that is sometimes organic and more often digital; looking back I can't really understand why it fit or why I received it with such enjoyment—probably a good sign.

There are a few things that jar. If it's a 'semi-autobiographical' piece then the friction between the two halves isn't always productive—a blindfolded rope routine makes its way in as an echo of Layla's own life and livelihood, but is performed by Yam Doyev, whose stage presence is very different, very fierce in comparison to Layla's, but who more importantly just doesn't fit within the duet of mimesis and transference that begins to unfold between the two central figures.

What If... is the long-worked-on result of some highly refined stagecraft (and a large pool of collaborators), and there's pleasure to be derived just from watching a production that is so mature and confident in its use of silence and darkness, pace and light. It's easy to give a lot of attention to that, and doubtless the brilliance of the piece's surface was part of the reason I felt I didn't see much further, but it's also that the function of the veil in a western, principally unveiled, culture has been worked into the texture of the piece: you wouldn't call it coy, or flirtatious, but it's a part of the show's nature to simultaneously attract attention and reject it, to bring you close and send you away. It ends up being a queer thing: personal and not; private and not; communicative in its ellipses.