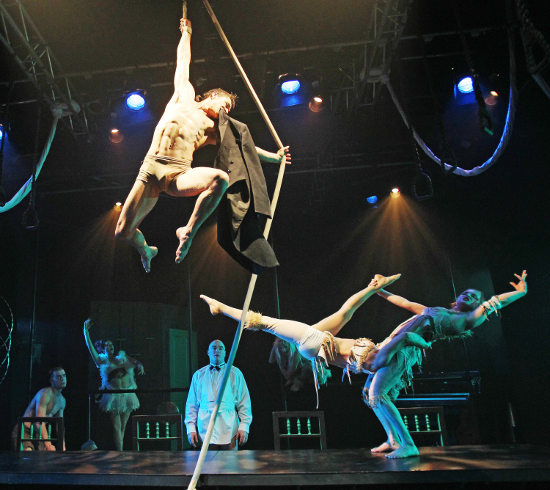 Prurient, cacophonic, in bad taste (but not very), crude, annoying, overloud, overlong—The Butler is a play written for a cast of seven circus performers and one actor that treads familiar ground in using the brittle social dynamics of the dinner party as a starting-point for a narrative that wants to reveal hard truths of human falseness, self-interest and venality. In the course of its two hours, the show switches frequently between two modes: outbursts of frenetic acrobatic performance (strong on the whole, technically, and including an excellent web routine that condenses what would ordinarily be a three-minute act into about 30 seconds—just the right length, in my opinion) and dialogue scenes where the cast sit at the long dinner table, discussing issues of the day, sweating incredibly.

It's performed with energy: whether vigorously faking (one assumes faking) orgasms, performing a not-too-shabby rendition of Ne Me Quitte Pas, or hanging from the ceiling breathing fire, the cast obviously like what they do and do it well enough. But where The Butler really falls short is in its characterisation, which is content to take stereotypes and crank them to a gross maximum. Table conversation is universally played with a gurning, cackling, bellowing delivery, the falseness and overstatement of which was only slightly moderated by the interval trip to the Pleasance courtyard, where a leery birthday party were surrounding a woman, shouting 'CHUG! CHUG! CHUG!'. Regardless, the mannerisms grated, with special mention for the brutal keening wail/laugh shuddering all too often from the high, white throat of one of the female performers, used as a stop for obvious and unfunny stubs of dialogue about e.g. wine-appreciation. I wouldn't call it satire.

The active theatrical mechanism of the play—the thing that really works, perhaps even better than it intends—is to turn your sympathies and interests so fully from the dinner party guests that the butler becomes a luminously attractive personality. In the opening scenes, where he dresses slowly amid the fights and chases of a cast of circus savages, he's beaten, white-faced, submerged, like a person recently bereaved. Played by the actor Tom Trevella, he speaks with a musical cadence, his dialogue, in the main, stitched together from cut-up segments of various works of literature which contemplate either the specific social interplay of the dinner party or else, more broadly, simply, the joys and sorrows of life. The collage style is, like the rest of the play's dramaturgy, careless to the subtler cross-relationships of the elements it combines, and even though your attention may be caught by a great line or (most of all for me) a beautiful translation of the story of Bede's sparrow, all those great and wise words do are provide a measure of The Butler's quickness and shallowness. You're better off reading a book.