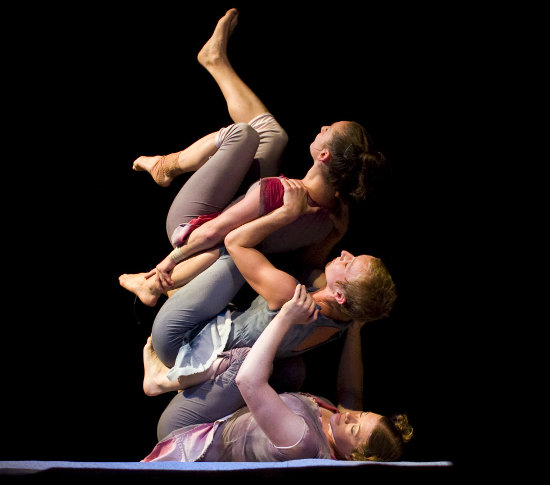 Drawing from their real experiences in the decade Emma Norin, Lina Johansson and Silvia Fratelli have spent training and performing together as Mimbre, Until Now is an attractive, friendly half hour of acrobatics and clowning that probably needs to be wound back a little in its development.

Drawing from their real experiences in the decade Emma Norin, Lina Johansson and Silvia Fratelli have spent training and performing together as Mimbre, Until Now is an attractive, friendly half hour of acrobatics and clowning that probably needs to be wound back a little in its development—to the stage before its jagged edges were filed away. Like countless mime / visual theatre / circus shows before it, Until Now uses suitcases (six here) as set, props and balancing blocks, and engages differently and variously with their status as an open metaphor: whether it’s a journey using just two cases as the road, the back case dragged round in front to become the next step; or opening another to reveal a miniature diorama and a memory of home.

The company’s acrobatic work holds back the aerial tricks to the final set, and mostly links long complex runs of fluid choreography that repeatedly return to the image of walking (through the air, over each other, upright or inverted). As a representation of their relationship it’s one note (even if the note’s a sweet one: cooperation and trust), and so the big standout balances, unusual triple combinations, are in a way just more of the same: beautiful rather than fully invested with the drama of the characters lives and experiences. To put it another way, the show is about journeying but it feels like no one really goes anywhere. A related problem is that it’s better perhaps at creating those diffuse moments where the mood and emotive content resides in an image—like one performer walking forward, slow-mo, using the shoulders of her friends as stepping stones—than really meeting and returning the intensity of the audience’s focused attention when an individual is alone and still and not doing a handstand. The pace is quick enough, and the composition slick enough, that it never falls flat, but it’d be a stronger and richer work if the solution to its introspective sections weren’t to hurry on from them.

I should say that when I saw Until Now it was meant to be presented outdoors, but bad weather moved it into Laban’s studio theatre. I think probably some of the material would have played a little better in its intended setting, but it’s an interesting trial run as this winter the show goes indoors for a period of redevelopment that will adapt if for theatre venues. The redux premieres at the London International Mime Festival 2010—worth returning to in order to see what has changed as much as to see it for the first time.