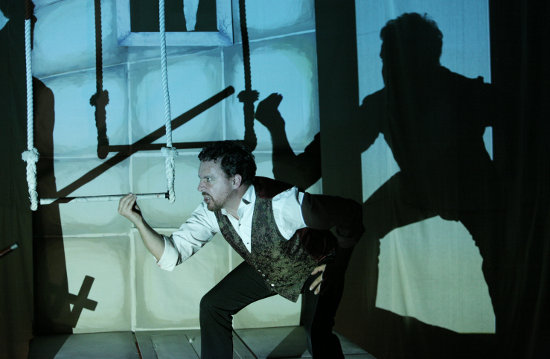 Circus is relatively run-of-the-mill, almost a given, in the theatre I see, but acting and sets are out of the ordinary. Proteus' Dracula has both: the set is a sloping floor bracketed by walls that receive projection to become, variously, a crypt, an asylum and a moonlit sky; and the five performers switch costumes and modes to take on the cast of the book. As you would expect the company have had some work compressing Bram Stoker's novel, and in doing so have added a frame of psychiatric treatment (a broken Jonathan Harker is counselled by Van Helsing)—an alteration which, though it ultimately changes the fate of some of the characters, is probably more a means to convert the letter structure of the novel than an attempt to radically rework its character. The dialogue too, even though it patches together material from the book and the company's own writing, stays close to Stoker's dense, heady prose. There are moments of ellipsis—how did they get there? when did he change his mind about that?—but nothing to throw the piece from its rails.

There's a trapeze on stage, and some silks to the side, put to different representational uses. When a trapped Jonathan Harker is crouched at the bottom of the sloping stage, Dracula is up on the trapeze in a stage picture which holds its effect somewhere between a filmic interpretation of the Count's stature and power (an upshot, basically) and a literal depiction of flight and levitation, the trapeze gently swaying as he pushes the ropes out wide. It works; other moments don't, or don't so well, with the final confrontation between Dracula and his pursuers depicted as a sort of all-in aerial battle royale. It's best when it's not really circus—at those times when the trapeze and silks are used as props or tools to manipulate status or to divide the stage and add planes of elevation. During a storm at sea the captain stands atop the trapeze—the bar, the deck, slipping and tilting beneath his feet—and the silks are spread and pulled across the stage, a projection of rain falling on and behind them—literally there are sheets of rain. Amid the chaos, Dracula rises from the floor to hunt the crew.

I am actually genuinely a little unused to people on stage pretending to be other people. Here there was mostly good acting (Dracula's player, particularly, coping well with the Romanian accent) partway unravelled by some weak acting: the audience came back from the interval more willing to find it funny, and even though in some places it wasn't the company's intention to go for laughs, I don't think it's necessarily a destructive reaction to high drama—especially not the kind which, like Dracula, moves its readers/audience apace through an eventful and scenic plot. In all the production is quick, smooth, not very dark, canny with its resources, handy with projection—fun.