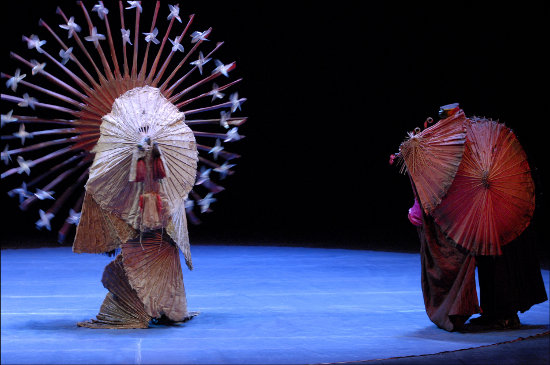 There’s a scene in Le Cirque Invisible where Victoria Chaplin walks out on stage with a number of furled umbrellas. She dances, and opens them one by one until they obscure her—more umbrellas than two hands could hold or control. As a final flourish a giant parasol spreads up and outward and, with Victoria invisible, the structure becomes suddenly a shuffling, aquatic creature. Another umbrella beast, different-looking but of the same species, drifts on and the two enact something between a showdown and a courtship ritual, circling one another, breathing and inflating and rattling. The scene is typical of Victoria’s work, which creates complex prop costumes that are constructed on stage and, oftentimes, severally, reconstructed, becoming something entirely new like a dementedly intricate version of a child’s toy that’s a robot and a spaceship. Cirque Invisible mostly alternates between Victoria and Jean-Baptiste Thiérrée, between her obsessive costume machines and Jean-Baptiste’s shtick, which is fast, jokey magic. His humour is escalation (he produces a pair of binoculars to look at the back audience, can’t see them, reaches round to pull out another set, this one about four feet wide), disruption (a heavy object thrown off stage makes no sound, a tiny one queues a terrible crashing) and surprise (a dove!).

It’s charming for a while, and interesting for a while, but in the course of Cirque Invisible’s two hours it becomes increasingly clear that neither Jean-Baptiste nor Victoria are offering anything past their virtuosity. Each has their own ruinous impulse that drags the show further and further down, though both are in the grip of desperateness—to entertain, to embellish, to move things on. I found Victoria the more engaging, but the complex assembling costumes that at first delight become, gradually, to exert an almost tyrannical influence on the stage: a sequence where Victoria waits and takes tea at a revolving café table, her chair rotating in time, counter, ends when whoever she is waiting for doesn’t come, everything goes still, and she puts up the chairs—a beautiful way to close the scene, but you know it’s not the end because of course the whole assemblage is going to become a huge, shuffling table-chair café dragon. Without question. What makes it so hurtful—and it is painful, in a way—is that every one of these creations is amazing, incredibly amazing—to create an aesthetic effect something like, say, a Miyazaki animation within the strictures of physical laws; it’s genius, of a kind—but to separate that from any context or meaning. For all that it gestures to the audience, or draws them to participate, the Cirque Invisible becomes impersonal: they’re not paying attention to you, not recognising you as anything other than an audience. They’re certainly not talking to you; the theatrical language is communicative only of itself: its own inventiveness, and cleverness, and the present state of its perpetually shifting self-image.

The creation of new tableaux is so fast and unconsidered that there’s no space to attach any meaning: the audience applauds as Victoria (savaged by the slack gaping jaw of a greedy fish that was previously her dress) kneels on the floor, her guts pouring out in one long silky intestinal sheet. It’s just a trick. The circus skills that are in the piece don’t fare any better: at the beginning of the second half Victoria walks wire and it’s a joy: just to see her walk, casually, with all her experience, but this too can’t last—it has to become something rather than simply be itself, and so she clips on at the waist and swims a length.

You can see the theatrical lineage connecting Cirque Invisible with Victoria and Jean-Baptiste’s son James Thiérrée, but his work is a world apart: Cirque Invisible’s throwaway trick-prop rocking chair becomes, in Au Revoir Parapluie, the perfect metaphor for riding out inner turbulence. Titling his new show Raoul, which in Cirque Invisible is the name of a depressed suicidal fish and nothing more than a five-second joke, starts to seem like a kind of challenge. It’s needed. Cohesion and renewal are beautiful only as they entwine with chaos and stasis, and what Cirque Invisible needs, simply, is for someone to mess with it.