Confessions of a Showman: My Life in the Circus 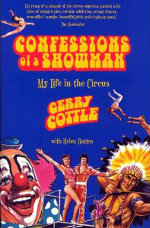 Here's a typical Confessions of a Showman anecdote, coming about halfway through the book, during a boom period in Gerry Cottle's constantly cycling fortunes, and describing the Gerry Cottle's Circus' trip to Bahrain for a two-week run at the invitation of the Sultan of Oman:

Anyway I needn't have worried about filling the tent. We had the opposite problem. People went absolutely crazy. Fights broke out all over the place as men clambered over each other trying to get into the tent. Our metal barriers were warped and the ticket office had men scaling the walls and jumping off the roof. The police were swatting men like flies in a vain attempt to stop the whole situation turning into a riot. The overcrowding wasn't helped by the fact that some of the police were reselling used tickets. The bizarreness of the situation was compounded by the mountain of sandals that were left outside the tent. All the men took off their shoes when they came in as if they were going to a mosque, but when they came to go home the sandals were hopelessly muddled and they all left with odd feet. Again I managed to make a massive profit.

If Josser is a minutely detailed evocation of the dirt and the drudgery and the toil of circus life, Confessions of a Showman, the autobiography of circus proprietor, former clown and 'ultimate chancer' Gerry Cottle, is a brisk and optimistic homage to the colour, the variety and the life of bigtop circus and showbiz. Spanning a forty-year career, the book begins with Gerry a young boy in post-war English suburbia, growing up during the heydey of the big family circuses, when televised circus took the prime Christmas slot after the Queen's speech: Billy Smart's on BBC, Chipperfield's on ITV, and Betram Mills' Christmas season at Olympia by royal appointment ('The Queen would attend the opening night and the audience would be made up of all the diplomats and their wives. Their 6,000 seats were full night after night.').

Gerry falls for the circus, begins to learn to juggle, and has his first appearance as a performer at 13 years old as part of his dad’s Masonic circle's 'Ladies Night' (of which there is unfortunately no picture, or none anyway included in the Confessions' photo centre-pages). He soon leaves home, joins the Roberts Brothers Circus, moves over to the Gandey's, and switches his ambitions from performance to business, conceiving a dream to own Britain's biggest circus that eventually drives him to strike out on his own. In a hectic narrative dictated by more than anyone's fair share of good and bad luck, Gerry moves through an intermediary phase where he becomes like the Del Boy of circus, buying cheap surplus apples and sweets and elephants and burned-down tents convinced he’ll make a profit (sometimes he does), into a period of wild success and international touring, through a bankruptcy precipitated by a disastrous overseas tour, then a return to success, then bankruptcy again, and out finally into the relative calm of his current life at Wookey Hole.

Along the way we see Gerry host and sit on the panel for the Circus World Championships (which has to be rerun over and over as the American TV crew insist that the US competitors need to win); commission the constuction of world's largest caravan (55 feet long with seven rooms); possibly begin the current relationship between circus and big-money pop with the Gary Glitter Rock and Roll Circus; and fall into, and haul himself out of, a destroying vortex of cocaine and sex addiction.

At its base the book is a wellspring of (often very funny) anecdotes, and Gerry is an enjoyable raconteur, whether he's describing a visit to an eerie Austrian castle to source chimpanzees (long story), recounting the visit of a feng shui priest to his circus in Hong Kong, or stopping off briefly to participate in the continuing posthumous rehabilitation of Jeremy Beadle’s public image (c.f. Ken Campbell’s Meaning of Life). He comes off pretty well. Particularly enjoyable is his anything-for-coverage approach to publicity (when his daughter Polly is born he arranges for a llama, elephant and pink crib to be waiting for her at the hospital exit – and tips off the press), which intensifies when he enters an unholy union with Mark Borkowski (who would probably have a pretty amazing biography himself). They seem to be having a lot of fun, and even the diasters are described with humour and brio, as with an ill-conceived tour to Iran in 1979:

The whole of Tehran worried me actually. The city was controlled by roadblocks and checkpoints. We were told to hide under our beds if we heard gunshots. There were continuous power cuts which sometimes lasted up to twelve hours. Many people seemed to be starving – I suspected going to see the circus was the last thing on their minds.

You see, I had inadvertently arrived in a place gearing up for a full-scale revolution. When you run a circus you really don't have time to read a newspaper or watch the television.

It's great fun. When Gerry goes into rehab to confront his addictions he has group therapy sessions and the others in the circle pick up on two things: (1) that he is self-absorbed and (2) that he is utterly, utterly obsessed with the circus. Well, perhaps, but he's sort of magnificent for it, and those two traits are the forces that drive his adventurous and impressive life. Read all about it.

Confessions of a Showman: My Life in the Circus