Josser: The Secret Life of a Circus Girl 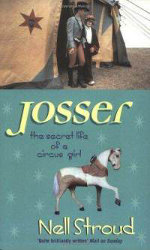 Recently graduated from Oxford University, and with, by reason of terrible accident, a wrecked family life, Nell Stroud joined the circus. First Richie Richards' Mega Circus, for a hard, demoralising season working as a drudge under the tyrannical direction of Mr Richards himself, a shouting, lisping and (if you've read the book you will surely agree) absolute bastard; then the French Santus Circus, where she became a ringmistress and started to work with her own horse, dreaming all the while of training haute école, the most stylised and elaborate form of dressage. As an outsider, a josser (a person who works in the circus who's not from a circus family), she's treated with initial coldness, then accepted into the circus community, one where loyalty and comradeship are entwined, always, with viperous and self-serving behaviour, where grudges are common but transient, and where the romance of the circus image is balanced, if not entirely replaced, by the unending slog of its reality – surviving against the indifference of audiences, against the weather, against violent animal rights protesters, against the VAT men. No one helps them.

And goodness, it's a hard life. Josser, a reasonably linear and diaristic account of Nell's first year in the circus world, is perhaps at its most enjoyable when its describing short-term-terrible experiences. So when Nell wakes up in her caravan in a field in Derbyshire after her first ever move, she writes:

In the morning I woke up and saw the windy fell through the caravan door, bent yellow grass and muddy tyres. There was a chiming noise, which was the boys knocking in the first stakes. The floor of my caravan was covered in smashed grass. During the journey a jar of mayonnaise had fallen out of a cupboard and broken on the floor. Glass was stuck to the bottom of my socks, and I was wearing the day before yesterday's clothes. My hands were black with dirt and I must have rubbed and scratched my face on the journey, because the pores on my face were black too and there were red scratched spots. None of these things was anybody's fault but my own: I had no idea how to live that life, and I spent a lot of time feeling uncomfortable and dirty.

The flatly depressive tone works brilliantly when it has something to sink to, but some people will probably find the more prosaic parts of the book too meandering and stuck on detail. For the circus enthusiast, or the circus worker, that probably doesn't matter though, because here is a whole world encapsulated in a rich and conflicted account of tawdriness and glamour, company and isolation, public performance and the privacy of constant travel. Written before Nell Stroud became Nell Gifford and started Giffords Circus (there's another book there, perhaps), at the very least Josser shows that even if Nell hasn't got circus in the blood she's got it in the head and the heart.

Josser: The Secret Life of a Circus Girl