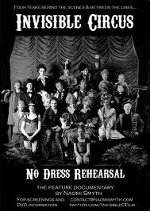 Following the highs and lows and the grand scruffy dreams of Bristol's Invisible Circus as they inhabit a series of abandoned public buildings, No Dress Rehearsal is a feature-length documentary shot from the inside by filmmaker Naomi Smyth—who began as an outside eye but soon enough went fully native, joining as a performer in some of the Invisible productions.

Starting as the Invisibles come to the end of their stay at the Audi Garage, a huge four-storey building with low broad open levels, all concrete, in Bristol's Stokes Croft, we see the company making an ambitious, politically motivated site-specific production about urban dereliction and the underclass. They're kicked out by the Council, and have a very brief stay in a former 19th century cinema, and a slightly longer stay in the old Horfield Police Station, before moving onto the two buildings with which the film is principally concerned: the Pro-Cathedral in Clifton and The Island block (comprising an old police and fire station) in the city centre.

These two projects marked the point at which the Invisibles went, in a sense, legitimate: rather than squatting they entered into agreements with the owners to license the buildings at peppercorn rent in return for maintaining the premises and perhaps raising the profile of the site. When they go in the Cathedral is a mess, and it takes a dedicated band of volunteers (there are a few who remain constant, a sort of core, but the faces of the Invisible Circus change throughout the film as people come and go) five months to get the building into the necessary shape for it to be opened as a venue. They get to put on a number of their own large-scale productions, and programme other events, but as their agreement comes to an end they also put on a tense final show for the developers who own the site...

At the Island everything cranks up a notch—it's a bigger site, with bigger developers, more offers of corporate work, and its here that the Invisible Circus starts the process to separate its activities into creative work (the circus) and the essentially administrative job of taking on and managing old buildings (incorporated as Artspace Lifespace). As the company begins to take on its current shape, there are fraught meetings and building internal tensions that break in the production of their first huge Island production, Carny-Ville.

No Dress Rehearsal is a low budget one-woman-and-her-camera (and-her-husband-and-his-boom) production, so the camerawork is at times demonstrably handheld, and the sound levels heave and fall, and it all gets a bit choppy from time to time. I'm not convinced, as well, that the story of Naomi's making of the film is really a strong enough line that No Dress Rehearsal wouldn't be better off without its occasional inclusion—it can feel like the film is addressed to her friends in the Circus rather than to the broader audience. But for me these are small things, and I don't think it'll matter too much for those who seek the film out. It's a good and candid documentary of a fascinating bunch of people—an inside look at a group who both embody the do-it-yourself Bristol ethos and who've been instrumental in creating it. If you know the Bristol scene and some of the people in the film already then it's a lot of fun; if not, then there are certainly worse ways to get an introduction.