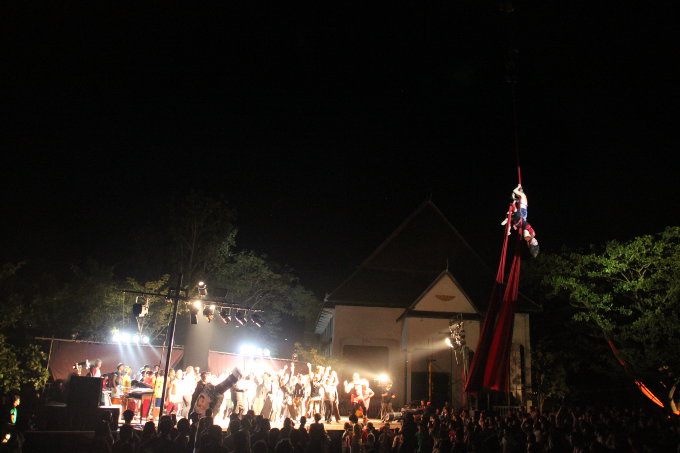 Heavy rain, desperate improvisation, an exploding generator – Jon Deline on performing at Cambodia's Tini Tinou International Circus Festival and why he'd do it all again.

Life has a strange way of presenting new opportunities for growth. Whether those opportunities inspire positive or negative development is up to an individual to decide. My participation in the 2010 Tini Tinou International Circus Festival gave me opportunities for change and reconstructed my view of the world, exposing me to new interpretations of life, circus, and the fundamentals of human experience.

The Tini Tinou Festival starts long before any of the performances take place. Many different performers arrive weeks, sometimes months, in advance – both to create new pieces and to share tricks of the trade with students of Phare Ponleu Selpak ('The Brightness of Art'). PPS is a school in Battambang that hosts the Tini Tinou Festival, boasts a wide variety of vocational education programmes, and provides housing for local orphans who attend the school. At PPS, performers in the Tini Tinou Festival would teach workshops including but not limited to modern dance, tai chi, aerial silks, acrobatics and clowning. The workshops are offered not only as a skill-share market, but as a place to exchange cultural idiosyncrasies. As the festival consists of performers from all over the world there are plenty of opportunities for translation mishaps and decorum faux pas.

This year there were performers from Germany, Japan, France, America, England, Belgium and Cambodia – in total more than 150. In past years the Tini Tinou festival included performers from Ghana. One performer from Ghana still maintains residence at PPS because he has more opportunities for a better life at the school.

It is amazing how the Tini Tinou Festival allows an abundance of cross cultural expression. French, Belgian and Cambodian circus artists all worked together to create a Russian swing and cradle act. New silks acts, dance pieces, plays, and clown acts were all created through the generous efforts of international performers to enrich the artistic diversity of the festival, blending ideas from across oceans to form new circus acts.

While we were there Tyler, my clown partner extraordinaire, and I had the opportunity to teach workshops in juggling, partner acrobatics and clowning. Not only that but we helped with an outreach program at PPS that takes deaf and blind people from the community and helps them create a circus show – with the deaf students performing the circus stunts as the blind students play the music. The performance takes place after only three months of training. Along with teaching our own sessions we also had the opportunity to drop in on any other workshop we wanted. Spending our time learning new dance techniques, training acrobatics, teaching workshops, and working on our own show made for some very long days. As the run of workshops ended and the shows got closer, we readied for the festival. We not only had to prepare our own show, but also had the delicate task of introducing each act in the festival, as we had agreed that we would be the Masters of Ceremony or MCs for the festival, a job that meant creating a short transition act for each and every set of performers. To our delight the parade creator and organiser, Vanrie, helped us out by performing with us and making all necessary announcements in Khmer for the local population.

« Phnom Pehn, a city after my own heart: crusty, grungy streets lined with motorbikes and tuk-tuks as far as the eye could see »

The first two performances took place in the capital of Cambodia, Phnom Pehn, a city after my own heart. Crusty, grungy streets lined with motorbikes and tuk-tuks as far as the eye could see. Buildings old and new squished together like a mismatched jigsaw puzzle. The show itself was a monster, running more than four hours long. Tyler and I soon realised that the shows were going to be like running a marathon: long hours of performing where our problem-solving expertise would be put to the test. For both of the shows in Phnom Pehn it rained during the performances. If the festival happened indoors on a big stage this would not have been a problem. The fact of the matter was that the Tini Tinou Festival took place outdoors. On the first night, at the Chatomuk Theater, it sprinkled rain during our show and only our show, creating a vision of florescent confetti falling all around us, shimmering from the refraction of the stage lights. The second show's rainfall was much more dire. The show was located at the French Cultural Center in Phnom Pehn and about three hours in it started pouring. We had to rush the audience into the bar that was close by as it was the only space available to get out of the rainstorm. The show was stopped for about an hour. Tyler and myself constantly ran around making announcements about the status of the show, and in the end it was able to continue, to the great chagrin of Tyler, myself and most of the remaining performers of the evening. The artistic director, Dett, made it very clear to us that this was his show and that the performance was going to restart once the rain had stopped – even though all of the performers that were left were students of PPS who were not ready to perform on the wet slick stage, which was a very dangerous surface for their acrobatic feats. All be it with our disagreements, the end of the show went off without a hitch. To my amazement about three quarters of the original audience stayed to the end. With our brief stint in Phnom Pehn over we headed back to Battambang to complete the rest of the Tini Tiniou Festival, our minds and bodies reeling from an exciting, exhausting, and frustrating set of shows.

The shows in Battambang had the advantage of having a lot more space as well as a stage with a roof over it. The organisers of the festival had a big main-stage built in front of the large field that constituted the main courtyard of PPS. A small stage flanked it as you went around back to get to the Circus Tent. So for the festival in Battambang there were three stages to perform on while the shows in Phnom Pehn only had one. This created a new difficulty for Tyler and I: how were we supposed to announce different acts on all of these different stages? Luckily a couple of the students and an administrator for the school helped out as we split our announcing trio into two separate groups. The shows were riven with disorganisation, miscommunication and technical malfunctions. The first manifestation of this was that the festival's organisers had scheduled two different acts that used the same musicians to perform at the same time. So the staff started freaking out when they realised that they had no show for the main-stage and they were going to lose the 500 people that were sitting out in the courtyard waiting for a show. Lucky for them Tyler and I were there to save the day, offering to perform our show on the main-stage to eat up some time. Another night one of the shows started late, creating a 40 minute gap for closing number. As the MCs of the evening Tyler and I were asked to fill the gap. We had already done our show so we couldn't use any of that material. Using our brilliant skills of deduction we surmised a clever idea to make up a clown routine with a ladder. The only problem was that we had no chance to rehearse, and had to make it up on the spot in front of the audience. It turned out to be one of the best clown acts we did the entire time we were there. The technical malfunctions started at annoying but soon reached a level of terrifying. Lights would go in and out, sound levels would go up and down for no apparent reason, sometimes causing the audience to shield their ears because the music was too loud. The coup de grace of the technical staff was the full-scale explosion of the generator that powered the follow spot. A doomsday visage, engulfed in flames, perched ten feet away from the audience.

« After years of war, internal strife and genocide, the Cambodian people are taking control of their cultural heritage and rebuilding the parts of themselves that make the population uniquely Cambodian »

But although there may have been problems there was something effervescent about the whole experience. The Tini Tinou Festival had an incredible connection with the local community. Every day before the show a large number of performers of the festival would parade through the streets of Battambang – not only letting the public know about the festival but creating a happening for the community to share. This localised promotion of the festival greatly influenced who was at the shows: hundreds of Khmer faces looking up at me dotted lightly with white specks of European descent. This festival gives such an amazing opportunity for any audience member or performer. It reaches far outside the standard ideals of circus and makes itself into something unique. Even though I may have had some problems with how the festival was run and organised I can say, with a warm heart, that I would do it again. Not only is there the opportunity to see world class circus, but there is the opportunity to share in the rebuilding of a broken culture. After years of war, internal strife and genocide, the Cambodian people are taking control of their cultural heritage and rebuilding the parts of themselves that make the population uniquely Cambodian. To be an accessory to a form of cultural enrichment is a once in a lifetime opportunity. Not just as a performer, but as an audience member too, getting the chance to see amazing shows of dance, theatre, and circus – constructed by students of PPS and by artists from around the world. So if you are in Cambodia during early December go check out the Tini Tiniou International Circus Festival. If you're in Battambang during any other part of the year go check out PPS. They have shows year-round and depend on tourist dollars to keep things running smoothly. So do it. Do it this year: go and check out PPS or the Tini Tiniou Festival, two amazing institutions bent on reclaiming a social identity for all of Cambodia.