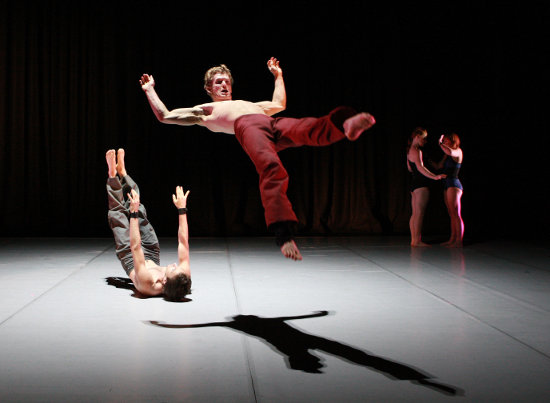 Coinciding with a short run at Riverside Studios, Circa gave a reception at Australia House that included a brief talk by artistic director Yaron Lifschitz to introduce the company ethos—‘to take all the things people do in circuses, from jumping on each other, doing acrobatics, hand to hand, bouncing on their hands, hanging off trapezes, flying through the air, tumbling, all the languages of circus—to reimagine these as the palette for making extraordinary, contemporary works of performance’—and to give also a quick account of the current state of Circa’s future projects. The company are working on a big new touring show, Some Future Apparent Good, which will have a Latin-American focus and is being made in collaboration with Bogata’s Ibero-American Theater Festival (‘an extraordinary, ridiculous, wonderful festival’); a line of site-specific and outdoor work that will kick off with Regarding the Joy of Others, a solo 25 minute trapeze installation performed by Chelsea McGuffin and, in its first iteration, created with renowned Brisbane-based sound artist Lawrence English and housed in the old metallic shell of a 50-metre gasometer; and an all-age work for adults and early ages that is expected to premiere middle of 2010.

After the talk I got the chance to ask Yaron a few quick questions about C!rca, which I’d seen the night before.

I haven’t seen the individual works, but it seemed like by putting three shows together you were presenting the material differently—without the throughlines, it’s perhaps more spectacle…

I think that’s probably true. I think it’s definitely exacerbated by some of the order changes that were necessitated last night. I think, though, ultimately, circus functions like a poetry cycle rather than a narrative. Like I think it is the ultimate actual real-time artform. I find that circus that makes too much of its connectivity, its threads, generally doesn’t interest me very much. I figure the juxtaposition, placement, quarrels between things are as interesting as, you know, ‘narrative’ for want of a better word. Our work isn’t narrative-based.

So it’s about keeping the energy of devising in the final show?

No, the work’s not really devised. It’s created by a group, but it’s not really devised in any logical sense. No, it’s more about I think that—I’m interested in the very constitutive elements of a work of art: line, form, shape, rhythm, weight—where it comes from. How any given show is constructed is really based on those kinds of elements as much as anyone’s journey or any sort of sense of character—it’s much more about finding how those formal things make something that has some sort of synergy between its parts.

It’s more about if you say ‘here is a picture of a young child, here is a picture of an axe, and here’s a picture of somebody crying’ you make certain connections between those things regardless of whether you had any intention to, and circus has that kind of… ontological presence that you just have to watch that thing actually happen. The force of it is extremely instantaneous.

When you put C!rca together was it almost sort of with the idea of selling the individual shows?

No, it got put together because there was a particular presenter who wanted a work that we couldn’t otherwise produce. And we did it and we actually thought it was going to be really horrible and it worked really well. Took a little while to work really well, and then it went incredibly well. What we observed happen was that we lost some of the deep living tissue that is in the individual works, but there was more air, the work felt more open and had a sense I think of, I suppose a freshness to it that I hadn’t seen in our own stuff before. I don’t think that was visible last night at all. In fact I’d say quite the opposite, but it will be there—it will be there in a couple more shows.

Taking the scene where a female performer walks over the body of a male performer wearing high heels—a lot of the work can embody gender politics or whatever else. Does any of it start from that basis?

I think the interesting thing is the less we try and tell a story, or have a theme, the more people read into it. I think bodies are inherently poetic and political and all that other stuff—so as soon as you bend one in one direction rather than another, or twice this way and once that way, you’re already coding the body. For you it might be sexual, for somebody else it might be about power, for somebody else it might be about domination—who knows what it’s about. Of course all of those things—really all your doing is bending the body. The formal properties are what we deal with, which seem to me to be so much more resonant than anything we can overlay on top in terms of an overlay of meaning that… yeah, just becomes really trite really soon, and what I hope our work does—whether it’s successful or not, but I think it’s reasonably successful in terms of not… not providing audiences with cheap things that aren’t in the circus itself. Here’s a story about blah.

Where do the shows start from?

Generally the shows all talk to each other, so one show raises questions that the next show in some sense tries to answer. So in a sense the shows themselves are a process of thinking about, through circus.

So what was the first show?

The Space Between, which started with three people and was looking at geometries of three, and we have a kind of theoretical framework of Four Space Theory and one of the spaces is connected or dramatic space, and it was about the impossibility of that in circus: people actually can’t readily exchange meaning with each other in circus languages. So then by the light of the stars that are became really about extreme states of isolation and Furioso was about when that breaks down and things smack into each other—but without all the overlay of I want this to be meaningful. And I don’t know what the next piece will be.