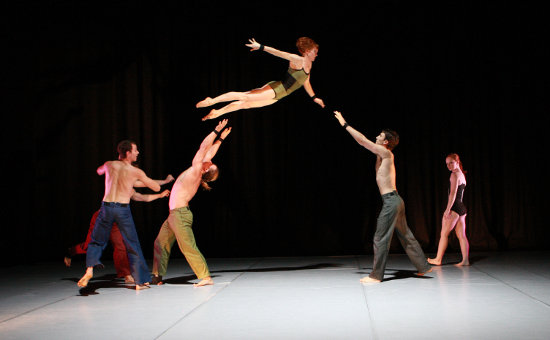 A woman in red heeled shoes walks over the body of her partner, leaving red inflamed marks where she treads; an acrobat loses, regains, loses again the control of his limbs as he tumbles across the floor; an acrobalance duo continually set up and dismantle the trick that never comes. C!rca is a show of beautiful images, but always the beauty is the body: there’s no set, no apparatus except, briefly, handbalancing canes and straps—just a high appreciation and control of the possibilities of line and form and movement.

The performance takes place on a white square floorspace down onto which are projected Open University-style graphics of moving geometric squares, spirographic designs and, at the beginning and end, a low-res galactic swirl (‘This is… space!’). The slight fuzziness and clumsiness of these projections (imagine a 90s screensaver) is a little odd, but their abstraction fits the ambition of the company: to present the audience with the raw matter rather than the final resolved work, to have not one narrative or set of characters, but many, at once, existing in the fine readable detail of movement and interaction. It’s a grand ambition, and sometimes it comes off, sometimes it doesn’t. There are a couple of middle sections of sound and noise where the whole cast is on stage, frenetic, and it’s affecting but affecting in the way that, say, a Coldplay song is—by being massive, by overriding or swamping your receptive faculties. It’s certainly not unpleasant, but I found my mind wandering the way it can with hyperbrilliant dance or physical theatre, when the movement and sound and design draw so tightly together that there are no gaps and, for me anyway, no point of admission. The emotive quality of these scenes is numinous and difficult to describe, but different I think from the subtler kind of ambiguity and slipperiness that exists elsewhere in C!rca’s doubles work. The red heels sequence takes the tension and focus of fakir art and complicates it with sexual powerplay (especially sharp as there’s a noticeable age difference between the older woman and the very young, Adonis-like man), but I responded more to a similar sequence where the same woman stood and walked on another man’s shoulders, circling slowly and haltingly around his head. There’s nowhere to go; as she edges out onto his outstretched arm, putting weight at points of immense mechanical stress, she edges them both towards overload and failure. You watch it queerly frozen by what is happening.

C!rca is actually a combined reworking of three previous Circa shows, and suffers a little for it. Trying perhaps to avoid over-fragmentation, the night goes too far the other way and creates a fast, smooth megamix that feels a touch (just a touch) too long. The smoothness in turn disrupts its other elements: it generates but does not ground its energy—so we see actions of character without having the time or space to process them: the next thing is coming along—and the show ends up being more spectacle, with more wow, than I expect the company intended with the original works. That’s fine; it will play very well at the Assembly in Edinburgh, where it is headed next—both a strong standalone and a spur to visit the earlier works.