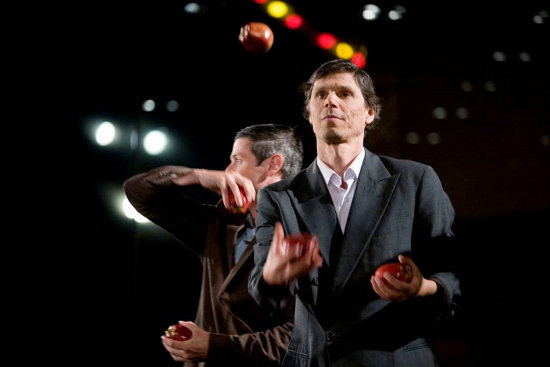 A parade of nine jugglers crosses the stage. Formally dressed, upright, in all cases coiffed, they juggle red apples, smile in turn, and slow-step to a line of nine chairs. As they take their seats, the sequence of their work is intersected by new patterns, of expression or gesture, that cycle and repeat through the group: covered eyes, two apples held coyly (or in surprise) to the chest, the smile. The soundtrack is music hall.

The stage is set with crockery—china cups and old teapots and milk jugs—the cast arranged in the spaces between. A deadpan and charismatic Sakari Männistö, enjoying the cynicism of his own actions like a Rushmore Bill Murray, moves between the working jugglers to disrupt them one-by-one, waving a roll of newspaper in front of their faces, between their legs, amid their hands—never swatting the apples away, but harrying nerves and concentration, like the game of trying to make another person blink. He keeps at it until they drop.

Somehow they all seem to catch the love of dropping, and throw the apples high, letting them fall to smash the crockery. The stage becomes littered with broken fragments and chunks of apple, and the parade begins again...

Smashed! was made as the centrepiece of a Gandini Juggling residency at this year's Watch This Space. I saw the company at WTS last year as well, where in the matter of a week they turned out probably my favourite piece of outdoor theatre that year, Gandini NightClubs, an abstract and technically complex ensemble show which collected a group of markedly different performers and joined them by their unabashed love of spreadsheet juggling and mathematics. In some respects NightClubs and Smashed! lie far apart, but they are, I think, alike in an attitude of dissidence, or a quality of subversion, which in NightClubs came from the technical language, and which in Smashed!, the wryer of the two, appears in wisps of narrative, with straight characters pursuing actions past the point of will, pleasure, or sense. So in a very funny closing scene the tall, lugubrious Malte Steinmetz struggles, staggers almost, eating an apple as he juggles it—an old trick, here chased on to an absurd end, bite following bite faster than a man can swallow. There's a feeling that the piece delights in its perversity: the touch I remember best is the song about a man hankering after bananas which plays while the cast juggles dozens of apples.

Smashed! seemed also to be playing loosely and knowingly with its influences: in essence it's a 30-minute version of Pina Bausch's Kontakthof, reworked with jugglers instead of teenagers or over 65s. Myself I preferred the Gandini rework to the teenagers, and certainly appreciated the shorter running time—something Sean Gandini, when I meet him to talk about the company's work on Smashed!, attributes to the natural characteristics of juggling: 'Pina Bausch was so good at those lengths. I never minded the lengths. Some people found her shows too long, but I loved that sense of them putting you into a slow pace—which I think would be insanely difficult to do with juggling because juggling is so fast...' Then, remembering: 'Actually, we did try it once. We did a three-and-a-half hour show, called 10000, which lasted the length it took to count between one and ten thousand. It was very draining for the audience.'

There's a line of experimentation running through the Gandinis' work which, perhaps surprisingly, crosses into their outdoor pieces, and I was interested to know how the company felt about performing Smashed!, a subtle and understated show, at an outdoor festival like Watch This Space—an incredibly open outdoor festival, situated as it is next to the South Bank's heavy stream of tourist traffic. Sean: 'In my head the WTS space is one where you can get away with a bit more concentration. I was slightly nervous about Smashed! being too detailed, but it seemed to hold people. Actually it held people more than I thought it would; I was prepared for... not a battle, but for more rejection. Angus [MacKechnie, WTS Producer] was very good; he said just try it and see.'

Still, there were concessions to the (family) audience: for a scene where one juggler is harangued by the rest of the cast ('Rubbish! Get a job!') the company did some early research at a circus school where they pushed the students to say the worst imaginable things. They were, as Sean puts it, 'fantastically nasty to each other', and the resulting scene was both difficult and powerful to watch; but for WTS the company decided they had to take out the swearing—a change they now wouldn't reverse. Other elements of the show changed as they were performed—or hardened, set as they were interpreted. In one brilliant scene the men cluster around Kim Huynh and Kati Yla-Hokkala, reaching from behind to manipulate their juggling—folding an arm, tilting a head, covering the eyes—so that they juggle without volition. Some of the gestural choreography from the seated sections is echoed and amplified, raised to a ludicrous pitch, and the WTS audience, the night I was there, found it funny. It was funny, to see someone pulled this way and that, but the more complex and unsettling aspects of the scene were still there, sensible if not dominant. Sean: 'What I found intriguing was when we made it in the studio the scene was very sinister and I was nervous about doing it at WTS. But Angus is very generous and he said just do it and then people laughed and it became funny outdoors. We didn't know Smashed! was funny. In a way it was sort of a relief, but then on the last night, Saturday night, the audience were a serious audience. At that point we'd done seven shows that were funny and suddenly the show wasn't funny and I think all of us were a bit thrown. The first time you put something out you don't now if it's funny or if it's serious—in a sense the audience tells you, and then you get used to what the audience does and you perform it according to what you think the audience is feeling.'

Compared to last year's Gandini NightClubs, Smashed! draws much closer to narrative theatre, a shift that Sean says reflects the ensemble: 'I felt like this year's people were more theatrical, which is why we tried to go more down that route. If one's lucky one can use people for what they're good at, and last year felt more like very technical jugglers.'

But if it's narrative then it's a discombobulated one that includes the terms of its own creation. Take the apples: they're not ciphers or symbols so much as they're artefacts of the show's devising process. How did they come into the piece? 'I like what they look like in the air,' says Sean, 'but also we had that restraint; I was really keen that we keep the restraint that it was only apples. Sometimes I feel like if you give yourself parameters that tighten you, you can make more interesting work.' (Clearing up an important point Sean here reveals that 'Royal Gala apples are the best to juggle, but the big ones we used to eat are American Red Delicious... they taste terrible but they look great'. Now you know.)

Restriction is also a benefit when there's a close deadline: in the case of Smashed! the show was put together in a week. 'Smashed! and the show last year are pieces that one wouldn't have been able to make ten years ago because there weren't enough people that had the common vocabulary,' explains Sean. 'We're very fortunate at the moment that there are enough high-level people that share a vocabulary—for example the chairs section in Smashed! [with the nine cast members seated in a row, juggling and swapping] was all made mathematically, and so very quickly. People straight away know what you're saying. Fifteen years ago there wasn't the common vocabulary; now you can work a bit more like you'd work with musicians or dancers.'

Speaking of choreography leads Sean back to the origins of the piece: 'I think the Pina Bausch thing ended up being stronger than we imagined—in my mind it was lightly inspired by Pina Bausch and it came out strong. I'd say it's only recently that her influence has come in. I'd say that maybe our early work was closer to our other hero, Merce Cunningham. Maybe NightClubs was a little bit more related to Merce's work and mathematics and complex space and all of that, and certainly all our early work was working with complex spatial arrangements. With Pina actually it's terrifying when you see her work because you just realise how much everyone's got out of it. Kontakthof and Café Müller are extraordinary and beautiful works. They hover at the back of your brain those pieces...'

Smashed! had a short run, four days, but for the future the company want to rework the show as an indoor piece, perhaps renaming it, perhaps drawing on the darker qualities that were part-submerged for WTS, but keeping of course the joy of breaking things and the love of dropping. Sean: 'I'd love to smash a lot more stuff.'

To follow the company's wide-ranging activities turn your eye to the Gandini blog.

For more on Gandini Juggling see John Ellingsworth's review of Blotched in Issue 1 of Sideshow Magazine.