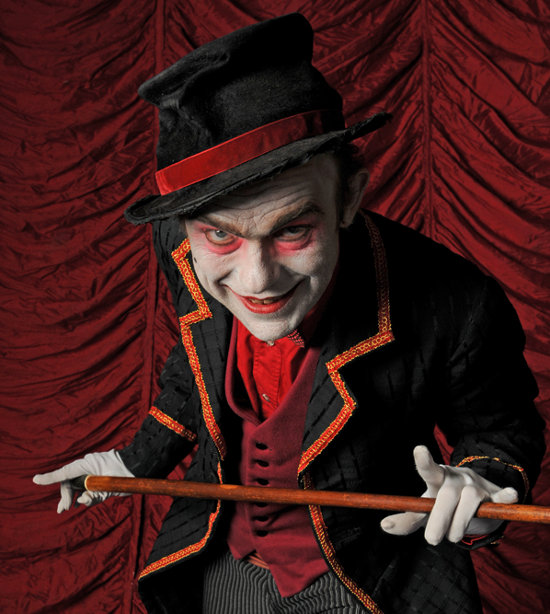 For four years The Invisible Circus occupied The Island, a huge premises enclosing an old police station, fire station, clocktower and yard at the heart of Bristol. John Ellingsworth talks to one of the company founders, Doug Francisco, about how a permissive, ever-changing band of artists, creative squatters and interventionists came to run the site...

So how did the Invisible Circus end up at the Island building?

It was kind of a follow-on from two projects that we'd done before—at the Audi Garage in Stokes Croft, and the Pro-Cathedral in Clifton—and Ruth Essex from the City Council had been very supportive of us since we came to Bristol. She contacted us and Urban Splash [the Island developers] about the site to see what was happening there because she does a lot of stuff putting art into unusual spaces. She's really sort of the unsung hero of a lot of the crazy things that have gone on in Bristol.

We ended up with a year free to redevelop the space and then started paying a low rent. We made the performance spaces and the circus training space a real focal point, then we sort of regenerated various bits of the site and got a studio rent in. There's lots of different small artist studios in there.

And you were given the go-ahead to do whatever you wanted with the building?

More or less, within reason, creatively. Obviously we weren't allowed to sort of knock in the walls or whatever because it's all listed, but they were pretty up for us doing what we wanted to do as long as we paid rent and didn't break the law.

Did you know what you wanted to do with the site when you went in?

Not completely clearly. We were looking for a performance venue and every single project we do responds to the site in some way. The Island was kind of too big really; we were like, Oh god it's huge. But it's one of those opportunities that doesn't really come round that often: a fire station, in the city centre, where we could do something big and invisible in the middle of the city rather than on the periphery. So we sort of took it on with a slightly daunted feeling of knowing what it was going to to take—this big old crumbling edifice that was built at the turn of the century.

You'd come off the back of doing two large-scale projects at the Audi Garage and the Cathedral—but was it a different thing to be at the Island, right in the city centre? Had you done anything like Carny-Ville before?

We'd never done anything quite like Carny-Ville before. We'd probably never had a site like the Island; the Audi Garage was quite big, but very different: lots of closed spaces, car parks and different levels and stuff. The Island had this big courtyard... Carny-Ville came about sort of by accident; the first one we did we were sort of just having a bit of a party and thinking we could invite our friends and help fundraise to finish work on the building quicker. All the electrics had to be replaced and that kind of stuff. So I think we were five or eight grand away from being properly able to open the place, and then the recession kicked in and Urban Splash didn't have any more money to put into it. So we just set up a lot of stages really and were like, Let's have a party, it wont be too much work... We didn't want to put on a big show and have it be too much work, and of course then it turned into this huge project. We had to stop performers coming in the end because there wasn't enough room to put them on the six stages. It just snowballed, and we used it as a fundraising event for the next three that we did. It served to sort of fund that whole project, to run the venue; it subsidised the Island to a degree.

It was sort of a funny thing because Carny-Ville was probably one of the biggest shows in the country as far as concentration of performers goes, and everyone wants to book it but then you can't really because no one can afford to pay for it. It's kind of an interesting phenomenon in a way. I don't know if you could make it happen anywhere else. It was very Bristol-centric.

Those shows were huge, but very ephemeral in a way...

Yeah, when we sort of staggered out, we were a bit like, 'Where's it all gone!?'. That's the nature of the beast though because the circus—I think one year it turned over nearly £200,000 because we did two Carny-Villes and a load of other stuff. But all the money got used to do the gigs, and then we were like £8000 under the barrier over which you're no longer eligible for rates relief, so we were suddenly like, 'Shit! don't do any more gigs!'. If we'd earned another £8000 we would have been liable for another £130,000 in rates and it all would have gone horribly sideways. There were a lot of big things like that when suddenly you're like, Oh my god, and realise how delicately balanced it all is.

A lot of the artists performed in the shows for free or for fairly low rates. Do you think that's because there aren't a lot of outlets for circus artists to perform their own work in Bristol?

A lot of the circus scene has been very corporate-led for the last ten years or so because you get people graduating and going into corporate entertainment. So I think they're really appreciative of this more underground Archaos-y sort of stuff—because that's what it's all about in a way. If you spend three years training up to be a circus performer and then end up doing a duet show for loads of corporate gigs it's a little bit limiting creatively.

And a lot of the Circomedia students got involved?

When we first turned up we used to get loads of their rejects—you know, people who dropped out of the course would come and do stuff with us... but then we started to get more of their graduates.

They did a 25 year anniversary at the Circomedia Church earlier this year and they kind of invited us to be a part of that. We were always fairly distant of each other until then I suppose—just because we were doing different things. And we were kind of the crazy squatters that came to town and actually had no idea of the rich circus history that we were bumbling into. So I guess it was sort of an interesting thing to see the lineage of circus in Bristol, which has gone on since almost the inception of circus, and you realise that Circomedia was born out of a similar sort of scene when all those guys were younger and came together. There are a lot of parallels... Loads of our crew went through Circomedia years ago and stayed on in Bristol. That's the effect of Circomedia in one way—that people have carried on living in Bristol after the course because there's a big circus community: everything is here and everybody is here. It's kind of like everyone goes out to work everywhere else—there's not a big corporate entertainment market here really, compared to London or other places. So I guess we kind of plugged into that a bit and created something where people can perform.

After four years, how did you guys feel about moving on from the Island?

It's a mixed bag. Loads of people are like, Oh it's such a shame, but we were a little bit relieved almost, because it'd been four years instead of one-and-a-half and it kind of takes up a lot of time and energy to keep something that big going. So it was sad on the one hand, but we felt like we did it proud. The last Carny-Ville, Carny World, was kind of a piss take of us 20 or 30 years later, still here and trolling out this stuff—so we were a bit tired. And that was never what we were really about; we were always about short-term interventions.

Now you're installed at the Paintworks, what's next for the Invisibles?

We're not really a solid troupe; it's sort of the thing we've been wrestling with: how we actually make this work. The Cathedral was a little more distant, it was kind of tucked away a bit, but the Island and the Audi Garage were in a place where people were kind of coming through: they were quite accessible, easy to find and to be a part of. Trying to condense that down into a company that works in a normal sort of way... at some points there are 250 of us, but then at others there are like six of us. The Invisible Circus—that's what you get for choosing a name like that.

When I formed the company with Wim I guess the dream was to be a travelling circus. But I also really like taking over old buildings, so we're in this constant dichotomy of what is it, what are we, and what do we want to do? We're looking at maybe taking on sites that have been closed-down more recently—because up until now we've only been given really knackered buildings, and I don't think we've got too many more of them in us. There's only so many floors of pigeon shit that you want to clear out in your life and I think I'm pretty much getting to my limit.

For years we've wanted to do what we did in the last few, but four years at the Island has kind of taken its toll. There probably won't be another Carny-Ville that's quite like the old ones. It would cost a million to do the show. But that's the beautiful thing really: we did it because we could. We don't need your corporate sponsorship, we don't need to spend months writing funding proposals to fit into your cultural strategy. We are Bristol and we want to do this.