Bartabas / Ko Murobushi: The Centaur and the Animal 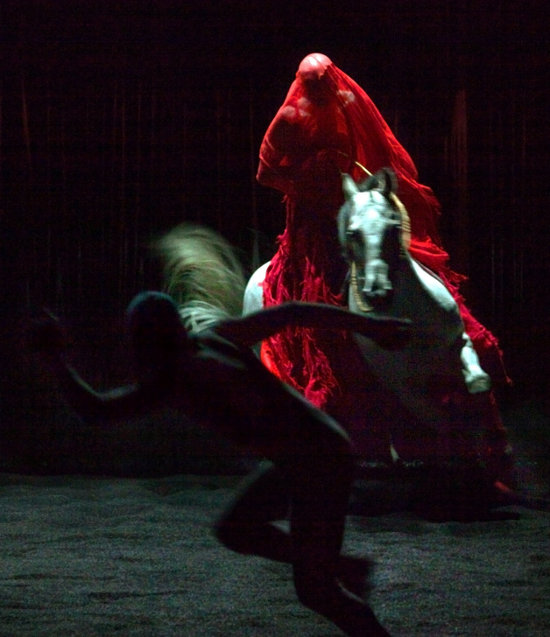 I had no reason to expect something so unpleasant. Sadler's Wells have certainly kept quiet about the fact that, while The Centaur and the Animal does indeed have four beautiful, resplendent horses trained by an equestrian legend, Bartabas, and a noble butoh master, Ko Murobushi, onstage, it is also wrapped around the Comte de Lautréamont's vile and unremitting Maldoror. I'm not complaining. In exceptionally convoluted and richly sensory and painstakingly sibilant prose the inner-voice narrator tells us that he is covered in filth and horses despise him and that when they look at him they vomit. He describes his rotting, leprous body. His penis has been bitten off and replaced by an evil viper, his anus penetrated and taken over by a crab, his buttocks sloughed off so that two jellyfish may take their place. Perhaps you don't want to hear what's happened to his testicles.

Someone told me recently that butoh is meant to be funny. I don't know if that's true, but about halfway through The Centaur and the Animal I felt like I got the joke. It's not super funny, but there is a kind of cold, blasted humour in the relentless nihilism and fascination with paralysis, disease, disfigurement, viscera, blood, murder, collapse, the cannibalism of living things, clots, scars, regular and makeshift orifices, defecation, organ failure, decay, death. It's the voice of the counterculture, anti-everything artist who needs to remind you always that your body has inside stuff – a compulsion often concealing a kind of doddery conservative anxiety for technology and machinery, which in The Centaur and the Animal seems to seep through in the digital mitochondrial blips that flash through Jean Schwarz's ominous, juddering score.

Loosely the piece is about the myth of the centaur, although in my reading the centaur is more of a recurring symbol of a spiritual experience that Ko Murobushi's crawling, wretched, no-person must always refuse. The horses, ridden by Bartabas in costumes ranging from a sort of hooded executioner to a crinkled, rust-brown, winged moth, appear as visions or figments, watched by Murobushi as he lies supine, or slithers about the stage, or stands, his skin 'still and calm as the lid of a tomb', in a column of dust falling like silent vapour. These encounters between horse and man have power of a kind, deep and difficult to identify. It's painterly, in a way – the images are to be met, investigated, engaged with, and are presented discretely but in deliberate sequence, like the works of a gallery. And for all that it descends by its belly to a pit of sin, the piece has moments of grace. As Murobushi rolls over in his sleep his shadow rises to protect him from a figure on horseback wrapped in red cloth – a snarling, cowled wraith – the shadow preventing its passage by matching the lateral movements of the horse, racing and sliding back and forth in the dust of the stage in a struggle that, suddenly, seems to have very high stakes.

I'm not convinced that, as advertised, the work says a great deal about the relationship between man and horse, or that in that partnership there is much, here, that can be extrapolated and mapped onto broader human experience. Driven and ridden the horses can take up their ethereal role; left to their own devices they begin to disrupt things in a way that the piece seems to have failed to think through and internalise. Mostly what the horses do, when free, is show-up the artificiality of the rest of the performance – there's in particular a scene where Bartabas, crouched in a shaft of light, goes through his butoh choreography, one arm outstretched and up and moving very slowly like a plant-limb twisting toward the sun, and all the horse tries to do is eat his fingers. That is what is on the horse's mind: fingers.

It's an odd thing though. I know that in the moment of performance I didn't like The Centaur and the Animal and wanted it over, but I've been working steadily in the time since at reconstituting my experience of it, and parts of it have stuck with me, and it's returned the time I've invested in thinking about it, and now I'd probably go again. I'd be very hesitant to recommend it, but perhaps if you've an interest in that Burroughsy, Ballardian, Selfish (as in 'like Will Self') aesthetic slant then you'll get something from it – or if, like Maldoror, you have a fascination with 'wallowing in the most foul mires'.