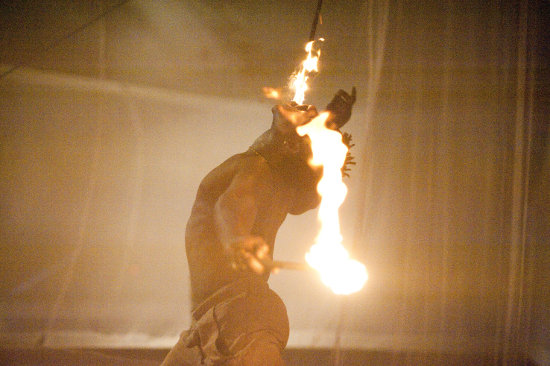 On the Avenue de l'Yser, just past the laundrette, just before the MacDonalds, down the light slope of a stony drive, movement catches the eye. At first its the black, many-headed silhouette of an active crowd, but then, behind and above, there's a flowing contour of red and white, like the underside of a cloud, shapely and iridescent. Drawing closer, it's a high, high grid of wires, and a thousand triangle pendants, hanging in ranks. They form the fluttering roof of a large netted compound, which the audience stand outside, and which inside is mostly empty space – at one edge there is a row of unoccupied chairs, in one corner a triangle of coloured buckets; a cluster of red-white umbrellas appears mid-air, inverted and floating. In the centre of the compound, seeming to occupy its own world, there's a single tent; white and red.

Nord/Sud is an odd thing: an installation by the visual artist Daniel Buren in collaboration with the circus troupe Sikasu, co-produced and supported by a long list of organisations, but built for Festival Circa during a six-week residency at Auch. As a vast art object it practically warps space; it's dreamy, magnificent, exciting. The crowd is like a fireworks crowd – in darkness, gazing into light. As the performance begins (or the installation activates) a wire-walker ascends to the top of the structure, and walks the lines of the pendants, then on wires that cross them, stopping at points to ring a bell at his waist, marking a place like a bell at sea. It's mysterious and stately, but just the prelude; the audience are led inside the compound, and into the tent.

It took something like forty minutes get into the chapiteau, and by then the audience were restless and vocal and very expectant: the wrong mood in fact for Nord/Sud's interior component. Sitting on four sides around the performance area, the audience at first see no further than ten feet in front of them, the space divided by multiple, layered semi-transparent screens – thin and light, like mosquito nets. Figures appear walking around the edges of the ring, behind one screen, in front of the rest, dusty and obscured: a man carrying a suitcase, another riding a bicycle, a flatulent contortionist, a searching woman, and as they walk around the ring, passing in and out of sight, playing to each side of the tent, their actions repeat, build, play off one another – the communal mood of the crowd outside captured and drawn down to a quiet, local scale.

After that, Nord/Sud's separate intentions as a live performance and an installation start to conflict. Some of the screens are drawn back, so that each quarter of the audience can see their quarter of the ring clearly, and the remaining three opaquely. Performance vignettes move through the space – a burly man on silks, the contortionist once more, foot juggling, a bawdy piece of puppetry. Attention switches between the frontline performers and the shapes behind the screens, and myself I felt caught somewhere between the distance and individual remove of the art gallery and the cohesive, social experience of the live event.

There is, as well, an over-literal and too strong commitment to the four directive themes of the piece (water, lightness/darkness, transparency/opacity, public/private space – named in the programme as the grandes thématiques) which constricts and stifles the live performance; in retaliation the live performance disrupts the stillness and reflective intelligence of the installation. Perhaps with less ostentatious skills, ones that asked less of the audience in terms of applause and response, formal structure could have fully taken the place of pace and tone. As it is, what happens in the tent feels slight, a little, and misjudged, a little, but in the course of the week I thought about Nord/Sud often and went back to the installation, the outside, twice more.