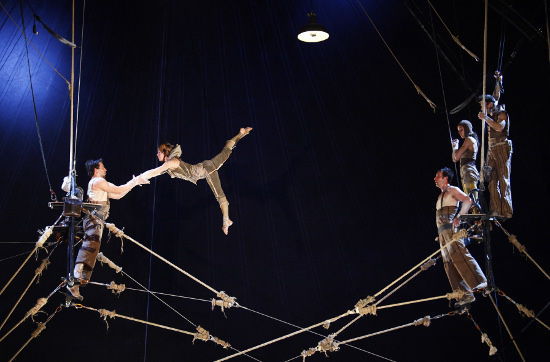 It began in 1988 as a meeting of circus schools and, through two decades of extension and growth, Festival Circa has kept that purpose close at heart: today it is foremost a place for the FEDEC schools to perform, to experience each other's work, and to immerse themselves within a professional programme that draws widely from the diverse facets of contemporary circus. It's OK, though; anyone can come along for the ride.

Each year for one week in October Circa takes over Auch, a small town in Southern France, fitting tents in spaces between buildings, in carparks, on grassy wedges of land, in front of the town's cathedral, by the riverside. It becomes a circus town – a fact felt strongly when walking the sloping, picturesque streets, and in the continuous day- and night-long buzz of the Maison du Festival, a broad, stone-pillared lodge-like building that rests at the centre of Circa's activities.

You can buy tickets for the FEDEC shows (there are usually two a day), which are boisterous and rousing if not always theatrically adept, and then there are fifteen or so professional productions, about half of which are entirely new. It's not the place to go to see contemporary circus' Greatest Hits; rather to get an overview of the year's artistic work and, perhaps, to see the next big thing. Underlying it all is a sort of second programme for the industry (but open to the public) of networking events, book launches, and project presentations – your days will be full.

For promoters Circa is a chance to see shows in their most nascent form and extrapolate to what they might eventually become – if that were cut, if this were worked on, if a director were brought in. Perhaps that doesn't sound so appealing for a non-professional audience? But if you go wanting tried and tested material then you've missed the point: like the Edinburgh Fringe, Circa is a festival with such vitality and pervasive character that the hit rate with the things you see is almost immaterial. It is a place to catch new shows – if you want, five or six in a day – but as well it's a meeting-place, a holiday, an annual State of the Circus address. It's recommended.

« The festival programme is for the students. Every year I want to present the new circus for the students – where contemporary circus has gone in the last twelve months, and the shows are very different because the new circus is different. We have the FEDEC shows because many schools don't know the works of other schools, and it's very important to see each other's work and to exchange. The festival is first for students, after for the general audience. »

The Rule of Art: Aurélien Bory Interview
By John Ellingsworth on 4 February 2012 in Interviews

'A dancer is dealing more with the body itself or the body in relationship to the floor — the floor is very important in dance. For the circus artists, yes the body is a tool, but it is not really enough — what the circus artist is doing is experiencing the possibilities of the body in relationship to some simple or complex object, or with some simple or complex space. This is exactly why I’m making my shows with circus artists. Of course they are also puppeteers. They are trying to make alive something that isn’t alive; something that is just a rock or piece of wood. I feel really at the intersection of all these forms — circus, puppetry, theatre, dance.'

Amid the bustle of Festival Circa, Compagnie 111 director Aurélien Bory talks to John Ellingsworth about new work Geometrie de Caoutchouc, science fiction and the posthuman, mathematics and art, the attraction of circus, and bodies becoming space.

DeFracto: Circuits Fermés
By John Ellingsworth on 9 November 2011 in Reviews

Going in for the finished version of Circuits Fermés at Auch’s Festival Circa I’d seen it twice before as a twenty-minute presentation, and was stuck with this idea that it was like an opus of juggling études.

The 2010 Mixtape: Festival Circa
By John Ellingsworth on 1 December 2010 in Features

'It's still a tent festival, with chapiteaus by the river, in car parks, hunched low outside the gates of Auch's towering cathedral, at the head of the Parc du Couloume – among the life of the town.'

Sideshow visits the Southern French town of Auch for Festival Circa, a nine-day programme of student and professional work, and one of the big events on the contemporary circus calendar.

As the audience files into the chapiteau, Compagnie Ea Eo are seated at the front of the stage: four young men, dressed casually, slouching a little, watching the influx of people as if from a park bench – as if it all has nothing to do with them.

Tr’espace: Le Cercle
By John Ellingsworth on 28 November 2010 in Reviews

I think I've watched enough physical/visual work now that the concepts of narrative and character have become fully detachable from my understanding of theatre. But, still, you put something else in place: rhythm or formal patterning or just an element of raw, pulsing narrativity that can come from the drama of technical material or the intrinsic communicative power of a moving body.

Baguettes, coats, bags of onions, wicker hampers, a double-headed broom, a picture book, coffee cups and saucers, spoons, plastic funnels, cardboard boxes – everything can be juggled, everything will be juggled in Les Apostrophés' lengthy and exhaustively inventive Cabaret Désemboîté.

In Spite Of All Sorts of Things: Patrick Masset and Jephan de Villiers on L'Enfant Qui...
By John Ellingsworth on 24 November 2010 in Interviews

'And we need a tent, a little tent, because we want to present the work in a real proximity with the public – putting them close to tragic sensations, and to fear, and all the sensations we can find in the traditional circus. Theatre now is more in the head, and we try to find physical sensations in the public, letting them react to what happens here on stage.'

A striking show at Festival Circa 2010, Théâtre d'un jour's L'Enfant Qui... is an oblique, ethereal portrait of an ill child, inspired by the early life of the sculptor Jephan de Villiers. Here Jephan and Théâtre d'un jour director Patrick Masset talk to Sideshow about their collaboration.

A boy with a shaved head padding over fine soil. Big coat, big glasses. Big, curious, unblinking eyes. He crawls forward on his stomach and watches visions of giants who climb the trees of the forest and work inscrutably. At first they ignore him, but when a spitting, terrible seizure comes he is lifted bodily in the air, his small feet grasped and made to stamp at nothing.

Cie Akoreacro: Pfffffff
By John Ellingsworth on 20 November 2010 in Reviews

The press copy would have it as the sound of uncorked and irruptive champagne, or of a hissing fuse, but where it's voiced in the production the title phonetic is always this downplaying, cocky exhalation. It's Not So Great, I Dismiss This, I Dismiss You, I Could Do The Same Thing Better And Easier: Pfffffff.

Unquestionably CirkVOST have an excellent wheel. Built from dark metal, two towering rings are joined by an intricate tangled network of ropes, pulleys and looping bars. Old hanging lights cast their glow in the centre; a dark plane of netting stretches the bottom.

On the Avenue de l'Yser, just past the laundrette, just before the MacDonalds, down the light slope of a stony drive, movement catches the eye. At first its the black, many-headed silhouette of an active crowd, but then, behind and above, there's a flowing contour of red and white, like the underside of a cloud, shapely and iridescent

Ici was my first encounter with Jérôme Thomas, a huge name in circus and new juggling, and it felt as though I'd come too late – that he's an artist who's climbed so high that he's cleared gravity and turns slowly now through outer space, intent on the stars.