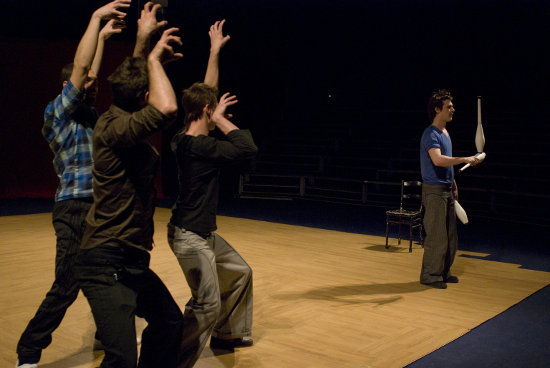 As the audience files into the chapiteau, Compagnie Ea Eo are seated at the front of the stage: four young men, dressed casually, slouching a little, watching the influx of people as if from a park bench – as if it all has nothing to do with them. This is their style: natural and unaffected – not, as with some companies, too keen to be like us, just content to be like themselves.

First, m2 is funny. The four company members, four jugglers, have an easygoing friendship that expresses here in that particular type of slightly cruel, needling male interaction – mock ostracism, play fights, rough love – and that lets the piece unfold by a series of idle games. Its comic instinct is to linger: denied a chair by a game of keepaway Bram Dobbelaere reads a book detailing Metro etiquette and dresses as an OAP to spend a beautifully slow minute coughing loudly and tapping at the legs of occupied seats with his cane; a memorable piece of rhythmic ensemble hoodie rearrangement (hood up, hood down, sleeves up, sleeves down, zip up, zip down – and permutations) has its symmetry broken as Éric Longequel absent-mindedly strips to his underwear and moons the audience, then takes the stage for some extended underwear posturing.

After a buoyant first half, the piece then sets out determinedly to kill that mood: the stage – a laid square of veneer wood – grows progressively smaller as strips of floor are removed, and the close relation and sympathy of friendships turns to irritation and flaring anger. In pushing a little too hard against the danger of becoming one of those old Sunday Times adverts with the post-football 'joshing mates' (or however you'd phrase it – definitely not my world), m2's flashes of aggression can seem baseless and overly sudden, but it hits the mark in the final scenes, as the flooring is pulled up and flung out, and Éric Longequel, cramped onto a tiny square with the other three, sheds juggling balls as hands reach over and around to drag across his face and pull at his shirt.

Playing the same venue as Cabaret Désemboîté, and with the same make-up of four male jugglers, m2 felt younger, fresher, sharper – a piece that wears its intelligence lightly but is nonetheless exact in relating the fastidiousness and kinospheric awareness of juggling with the troubles of living together. Ending Circa, it was one of the best.