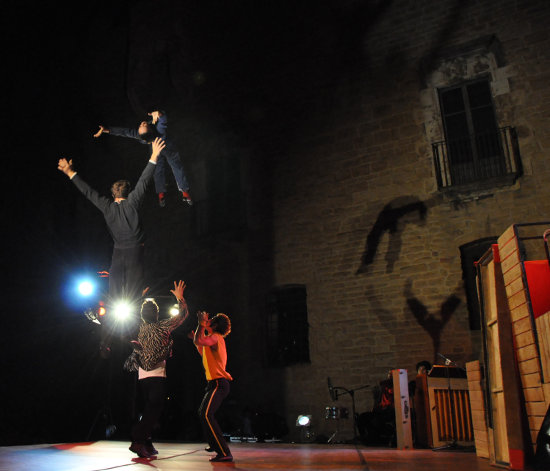 The press copy would have it as the sound of uncorked and irruptive champagne, or of a hissing fuse, but where it's voiced in the production the title phonetic is always this downplaying, cocky exhalation. It's Not So Great, I Dismiss This, I Dismiss You, I Could Do The Same Thing Better And Easier: Pfffffff.

It goes like this: timid, staid, dressed to conceal, a young girl walks into the world of seven vigorous, acrobatic and underoccupied men. They swagger over and she's pulled and spun from one to the next, lifted and thrown, her face rigidly surprised and wide-eyed – but with each somersault and executed trick her confidence and appetite for performance grows, becomes a hunger that outlasts the interest of her potential suitors. When the show ends and they start packing the set she's left sitting on a box, downcast, anhedonic. One man tries to coach her through post-show depression with feats of juggling, but it's not enough, she doesn't care, it doesn't matter. Pfffffff. She needs one last spectacular moment...

For the most part the performers have a rough, game charm, but Pfffffff is more like a street show, very broad, very simple. There's a thin thread of development in Solé's journey from fear to excitement (tracked by a series of gradually upgrading outfits that run from grey boilersuit to a final, fiery leotard), but otherwise the show meanders along, taking a number of veering diversions to make full, exhaustive use of the (admittedly broad) abilities of the cast. Sometimes you wish they had more restraint. A collaborative beatboxing duet evolves into a showdown between the beatboxers and the instrumentalists – the two forces storming one another back and forth to either end of the stage – and it's well executed and they're good musicians (/boxers?), but it actually made me feel hot and embarrassed; I might have even blushed, in the way that you do watching the spectacle of a person outstretching themselves.

They're an immensely talented and young cast – Claire Aldaya especially is an accomplished acrobat and handbalancer, and there are exhibitions of satisfyingly weird specialisations (my favourite: Maxime Solé basing in headstand on a pedestal affixed to a swinging trapeze) – performing a show stitched together from old and insubstantial ideas. Outside, much shorter, it would probably do very well; inside it slides right off.