Circomedia: You Take My Breath Away 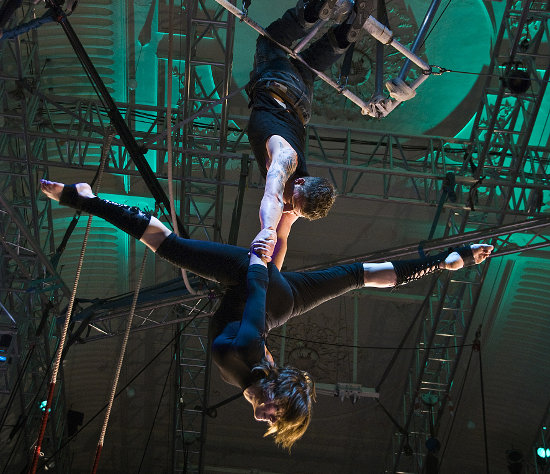 The concept for this year’s Circomedia showcase is a reality show where audience votes are disregarded, circus performers competing for stage time while behind the scenes an embittered cleaner looks to ruin the show. There must have been some substantial changes after the publicity for You Take My Breath Away was finalised, as in performance it doesn’t much resemble the marketing blurb or mood of the (lovely) signature image, and the show as a whole feels as though it needs more time to come together. Currently it has some of the problems common to student and end year productions: an unevenness of tone caused by the collaboration of performers with very different styles and ambitions who wouldn’t ordinarily choose to work together; a narrative frame that hangs loose to accommodate the variety of acts/skills and long running time; the inclusion of scenes that confront the audience with material that is intended to be dark or difficult without solid, dramaturgically consistent reasons for doing so; shakily integrated multimedia; and a slightly too great predilection for disco and ensemble disco.

You Take My Breath Away is the first full-length show by Circomedia’s degree students (they’re halfway through the course with one year left), and there are some pieces where the teaching is obvious, not fully absorbed into the work and visible on its surface—two acrobalance/dance doubles ran concurrently on stage and switched between violence and tenderness without enough of a sense of where that dramatic content originated from, or where the boundaries of the relationships might lie outside of it. The most effective pieces tended to be those that worked using the theatrical content of the skills themselves: jugglers won the day. There’s a tramp club juggling act (Eric Nieber) that incorporates a few tricks with cane and hat—very short but no drops and simply pleasurable. I also liked Tom Hunt’s discordant, angular routine where the balls were caught in crooks of elbows and knees—again, short, but certainly with material and life enough to become something longer; it felt like it was his own. There’s a nice vignette where James Allen does a walking globe obstacle course to spy music, jumping from one globe to the next, pausing for the occasional spot of hat manipulation or five ball juggling. Then an ensemble routine where six men in business suits play with the sonic effects of simultaneous club juggling and synchronised movement works very well, even if the particular menace it creates is largely ungrounded and contextless.

The second half of the show (it’s at least two hours, not counting the interval) is where much of the more aggressively difficult material is situated. Kicking off is a management seminar from Randy Lovewell (Darryl Carrington), who explains his system: three attempts, failure met with discipline. So he takes his three attempts at a five ball juggling trick and each time he drops punishes himself (by pushing a needle through the skin of his one forearm, stapling the other with a staple gun, and having his assistant stand on his head while he lays his cheek on broken glass). It’s enthusiastically performed and funny in its way, but perhaps not quite in control of itself—not because of the introduced element of chance (he may catch the balls, he may not), but because the liveliness and reckless confidence of the character generates a slight queasiness and embarrassment when you’re watching him (apparently) hurt himself.

If celebrity or media superficiality is a target in You Take My Breath Away, then the show falls short—sometimes especially when it reaches for cultural touchstones. Flashing Susan Boyle on the back screen when a covert Circomedia student gets pulled to the stage to sing a shy lonesome song gets a laugh, but putting up Josef Frtizl’s face while the cleaner character lowers a bound performer headfirst into a water basin is an ugly appropriation of an image and story that shouldn’t be compressed to a symbol. It’s not so hard to construct an intellectual argument that justifies the decision and reframes it as commentary on other media, but the nuance of that thinking isn’t present in the theatrical material.

On balance, though it was a lot earlier in the course and for some of the students their first experience of public performance, I preferred seeing the individual presentations that were given about halfway through the first year of the degree—there was more space for the students to follow their own interests and creative aspirations (resulting in one great piece: Silke Schirok’s juggling lecture on Heisenberg’s Uncertainty Principle). This ensemble show, for all that it has some good in it, might not be the best place to first encounter these performers and their work.