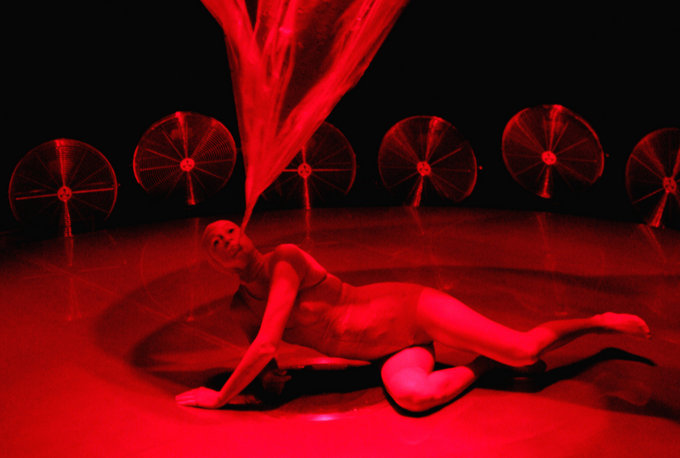 In her last show P.P.P. the juggler Phia Ménard worked with ice — a substance that couldn't be held and that couldn't be dropped, and that would, slowly, change its state if left untouched; a substance that was 'unjuggleable'. With Vortex she has laid out a similar challenge for herself in choosing to work with the element of air — intangible, changeable, invisible except as it affects other bodies — in combination with the synthetic material of plastic. The overlapping worlds of juggling and object manipulation both have a case in claiming custody of the resulting performance, but let's leave them to fight it out and take a non-taxonomic, neutral approach in asking: What is it?

As we enter, a man is hunched over on his knees at the perimeter of a circular stage surrounded by fans pointing inward and down. He is very wide, and soft, and is made of plastic, his face a white sphere, his eyes hidden by sunglasses, the space of a mouth taken by a thin breathing tube that reaches to whatever lies inside. He is wearing an overtight suit, and seems... anonymous. Gloved hands are working gently, precisely, methodically on a plastic bag, a shopping bag, which is folded, flipped, folded and sellotaped to a few extra lengths of translucent plastic. It takes some time, but when it's ready he places the bag at the centre of the stage, walks slowly around to turn on each of the fans, and steps back. As currents of air criss-cross the floor the bag is scooted this way and that, lifting a little, then sliding back, moving sporadically over the ground until, in a moment that is like a tiny twist in reality, one obscure set of variables meets another and the wind enters the plastic like a spirit. With body, arms and a tiny head, the bag becomes a graceful wisp that pirouettes and turns with the pace and energy of a dancer. The wind increases, the figure soars upward, and the man pulls more bags from his chest — pink, blue, green, striped — flinging them out to be caught and animated. He walks among them as though through the flowers of a garden, carefully disentangling their figures when necessary, at one point gathering them in the bowl of an upturned umbrella (they climb in themselves, flopsily) before again releasing them. In time, though, he withdraws, and watches the aerial dance silently until something inside of him shifts. Grounded, heavy, slow, awkward, the man thrashes his way through the bags, clutching them from the air and furiously shredding them in his fists. He tears them apart and stamps the last to pieces, and begins then to claw at his own form, a shadow rising to dance over him like the very devil as he begins a long struggle to pull back skin after plastic skin...

From there on in Vortex gets considerably darker, and, as was the case in P.P.P., the stage becomes a psychic arena for the artist's confrontation of her own identity — the dynamics of the encircling, invisible column of wind a metaphor for the fact that everything you throw out eventually comes back to you, and everything pushed down will in time rise up. Also like P.P.P., Vortex has the patience and economy to rely on just a few incredibly striking images. The plastic bags dance at moments with such great musicality that it seems impossible there's nothing to guide them but the conflicting forces of the air's currents, and the whole audience was, I think, transfixed by the scene where the plastic man shakily — and at length — pulled from his stomach what must have been about 200m of his own black guts, this glistening intestinal tubing flying up and massing over him in a vast, oily, tangled cloud. There's a resolution that lies past Vortex's hellish and visceral and forbidding descent as Phia Ménard / the plastic man strips back layer after layer, but the performance has, in its opening scenes, a subtle touch in physicalising an itchy, undefinable sense of what it is to want something else, something more, and recalled for me — among other things — physical sickness, hospital sickness, and its strange medley of benevolence, fear and hopeless rage where one emotion is constantly being mixed into the next.

All of which said, I can't find ground to stand on in the conversations that seem to be surrounding Vortex, where people ask if you need to know the artist's life story (summary: she had a sex change) in order to 'get' or to fully appreciate the art itself. Knowing these details gives you a particular interpretative slant, I think, and perhaps a satisfied and privileged sense of being clued-in as you move through the performance, but it's like the knowledge is a route map and the art is the territory — you can go another way. The idea that Phia's life story is the truest line you can draw through the work ultimately limits it, encloses it, and risks implying that the intensity or clarity of the performance is somehow brought by the audience as they studiously recognise the conditions of its creation — as if the strength of the show is not instilled by its artist(s) at the moment of creation and performance, but by the liberally attentive, compassionate attitude of those who view it. Vortex felt most to me like an old, old story — following a classical (and given the verticality of the work, literal) Freytagian pyramid of exposition, rising action, climax, falling action, denouement; and manifesting a pure purpose that emerges gradually from fantasy and desire, from the frustration and sickness of longing, as the will to change. Within all this Phia's life is just one smaller, symmetrical expression of a universal shape; one way or another, you will get it.