Green Eyed Zero: In the shadow of picture frames 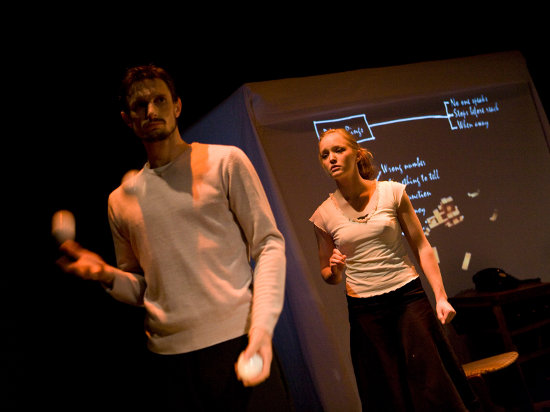 A couple move into an apartment, and it's wonderful. There's space for his office, light for her study. Great views. All their furniture fits, and the only friction is over whether the coffee table should be at an angle to the throwrug (stylish!) or neatly parallel to its edges. But then the phone rings. No one knows they've moved in, no one knows their number; they don't know their number. When they answer the caller hangs up, but the phone won't stop ringing. It's a distraction at first, then an annoyance, finally an unnerving presence in the room. Someone might be watching. Who was the previous occupant? Faultlines begin to appear in the couple's relationship, and as their happiness turns sour In the shadow of picture frames reveals itself for what it is: a dark Parisian thriller driven by the freaky compulsions of surveillance paranoia.

And it is compelling. The writing is sensitive, particularly when characters speak through letters or diaries, and the structure coldly ratchets the tension, aided fortuitously by the distant, forbidding chime of the Clocktower. It might be a problem that I found Mark and Louise's, the couple's, happy / in love personae less appealing than their stress-fractured, aggravated selves, but it's not a dealbreaker and the main part of the show is dramaturgically very tight. The circus is programmed into the regular drama the way a film uses montage—as a moment of introspection and emotive focus that compresses time and steps outside of a realist language. Troubled by the phone and her suspicions, unable to confide in Mark, Louise twists underneath a crystal ball. It circuits the cage of her folded arms, is caught by a flexed foot before it can roll away, and when she balances it on the side of her head it seems to push her down like the burden of her very worst thoughts. In another scene Mark, determined to ignore the darkly unfolding implications of their situation, juggles three balls, low, no tricks, his back to Louise as she paces and draws hesitantly nearer, nervous to disturb him again with her fears. Projected on a screen behind her a flow diagram runs through possible scenarios: who the caller might be, the nature of their motives—just one instance of the production's intelligent, often unexpected use of film, sometimes direct and othertimes tangential (my favourite instance of the latter being a little film that showed only the legs and feet of a couple, cutting between flirting summer feet and funereal formal shoes that angled awkwardly away from each other—lightly played, but an early foreshadowing of the story's eventual outcome).

Not quite so successful is the production's final scene, which explores the impact of the narrative's grim climax on Mark and Louise's relationship. It abandons the closely interleaved language of text, film and movement for a piece of pure expressionistic circus performed on a grounded cube (constructed from scaffolds and with a back wall decorated like a shabby bedsit). There's not much feeling of what is spelled out in the repetitions of the ensuing aerial choreography, or, more critically, not much of a sense of the emotional ambiguity and complexity that I think was the company's aim—and so when the holding pattern dissolves and their dance is refreshed it doesn't bring the needed catharsis (plus circus-to-tango has cleared the threshold now to qualify as cliché). Even though it has great metaphorical potential in reflecting the itchiness of co-habitation in a situation of grossly heightened self-consciousness, the cube sequence feels very separate from what went before.

It's probably worth saying that In the shadow of picture frames is Green Eyed Zero's first theatre production, and that, with the exception of direction from Bim Mason, it has been fashioned exclusively from the skills of the company's two members, Rachel Pollard and Sebastien Valade. The Clocktower performance was the last for picture frames, but they're now starting in on the next piece. Follow it with interest.