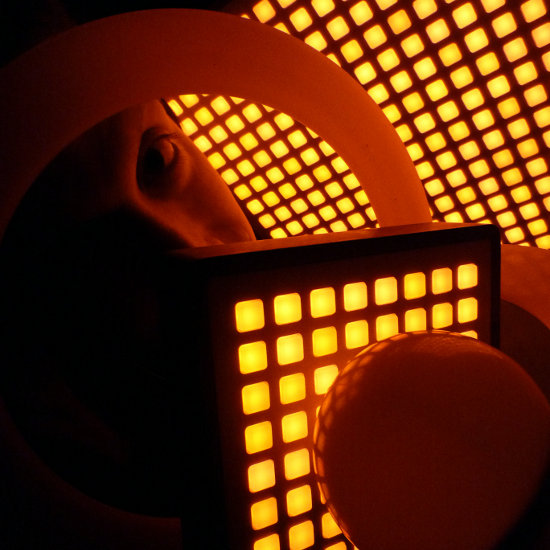 For all that Jay Gilligan stands by the door and greets each audience member as they enter, Objectify isn't inviting work – it's uncaringly individualistic, highly and minutely developed, and intellectual in that way that is perhaps a little impatient with your ability to keep up. If you're a juggler you might understand it as a 'snapshot of modern juggling' collecting performance styles from around the world, but if your reference is to the wider theatre scene then you'll probably be left with the feeling that Objectify has been made not just in relation to many other works, but also in opposition to them – as though Jay's seen a lot of work and not liked much of it. Or maybe I'm projecting.

Anyway, the stage is an installation, putting me in mind somehow of a tiny city – arranged in a circle with districts for different objects: a little forest of torches, clubs balanced horizontally on slanted wood blocks, lights at the perimeter, orange and grey towers rising at the back as though film-set skyscrapers scaled against Jay as the ravaging monster. The towers provide ledges for a laptop and two light boxes which somehow generate the show's music, and early on there's a lovely small section where Jay silently teaches you how these work, in a rudimentary way, pressing the surface of the box with his fingers to draw a grid-pattern of lighted squares that is then swept and turned into sound. At first you can see what's happening, you can read it, but as the second box comes into play and the complexity ramps up you're on your own.

The show is Jay juggles things. Juggling balls tied to dancing strings which cross and tangle and become more disordered as each pattern is completed. Juggling balls wrapped in plastic beads that unfurl and flick about and drop in lines until there's a pile at Jay's feet and he's juggling the small, hard cores. Wide-head torches that roll in patterns across the floor, the main lights out. Rings that are threaded through crooked elbows and worn around the neck. Throughout there are small, dance-like touches, but honestly the choreography of the piece is subsumed entirely by the work of the juggling – the movement is ragged and heavy-limbed; not clumsy, but snatching and awkwardly successful.

I found it all curious and calming, but I like to watch experts at work, in or out of a theatre, and almost the more advanced and inscrutable the better. Much of the rest of the room was bored and fidgety, and I don't know where Objectify might find the audience to appreciate it. At a juggling convention or festival, sure, but perhaps also in a gallery or installation context where the space is opened by its freedom of movement and elements of obsessive complexity and flat pacing don't insist on the audience with such weight: it's the kind of show, without disrespect, where I'd like to have a conversation about it, during it, and it's certainly robust enough to cope with people's attention switching away or to another, internal channel – that's where its own focus is, after all. As the American woman in front, at the end, said with relish: 'I love it. It's so... masturbatory.'