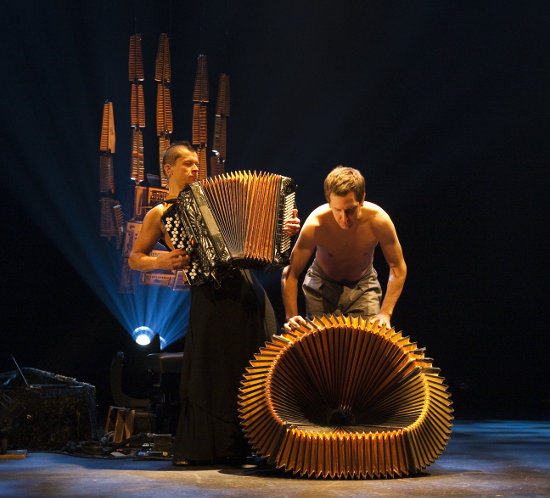 I was told beforehand that Kimmo Pohjonen once mooned the Queen, or some Royal, at a Proms performance in London. I don't know for sure, but I can credit it. With a low mowhawk, bare arms and a sweeping dress he's salty, earthy, tanned, strong; onstage he has a clear, unwavering confidence in whatever he happens to be doing, which could feasibly include mooning the Queen. For some time now Kimmo has made a name for himself as a prolific and rebellious accordion innovator (no, really) who's got a taste for collaborations – not just with other musicians (notably the Kronos Quartet), but also with farmers and Finnish wrestlers and sundry others on unusual projects – and for Iron Lung he's teamed up with new juggler Ville Walo to produce a piece that combines music and object animation. As Kimmo strides about the stage, building accordion music with pedal loops, Ville animates the guts of old accordions (which came from the discard pile of a local maker), puling the bellows of one into a circle and turning it inside-out, through itself, like a boneless deep sea creature, or snapping another open and shut as its dragged across the floor, moving like a worm.

But after the initial enjoyment of seeing a reinterpretation of the accordion as a traditional circus instrument, the animation in Iron Lung, and Ville's role in the piece, steadily sheds its importance. I think perhaps there's a real divide between theatrical images (which have metaphoric and allusive dimensions) and music iconography (which develops large-scale features primarily as brand messages), and that Iron Lung discordantly uses both. At the back of the stage a huge hand built from accordion keyboards is suspended on wires, waving slightly and forever threatening to come fully to life, and it seems to have a blurry two-way connection to, in one direction, the presumably intended themes of animation and control, and, in the other, to Kimmo's reclaimed-industrial-punk-rock image. There's also a nagging sense that perhaps it was just something cool, and later, when a spindly puppet made from instrument materials is walked jerkily on stage by Ville it's received in the same way: a piece of scenery, a point of interest, whose role in the show is actually only to hover for a few moments around Kimmo, speaking in guttural Star Wars tongue before retreating to a corner seat to wait out the end.

There's a scent of arrested adolescence in Ville Walo – he spends the show naked from the waist up, throwing himself around with little precision, and there are some regrettable instances of violence against accordions that culminate in the destruction of an old instrument with a mallet, the bellows coming apart at the hinges to show a feathery-cardboardy inside like a vaccuum cleaner bag cut open. It's an empty act – if you want to animate an object and to give it life then it's death has to be given a meaning too, and not just be an echo of the immature and frustrated impulse to destroy that we identify with the crassest and most narrow exponents of rock and roll.

Beyond all this, what you get from Iron Lung will depend mostly on how you feel about Kimmo's music. I liked it sometimes, and felt content and passive as, in a quieter moment, Ville offstage, he layered accordion dirge and throat singing into a dense, rolling blanket, at the same time gently pushing bellow-tracts bent and clipped into circles over the stage like prayer wheels. To me the show was a concert in which the original inspirations and ambitions of the collaboration – to explore the sympathies and synergies between each other's work, and to make a piece, presumably, about breath and animation, and the question of whether we invest life into machines and instruments as we build or use them – survive only as artefacts, at best inert, at worst like shards beneath the surface.