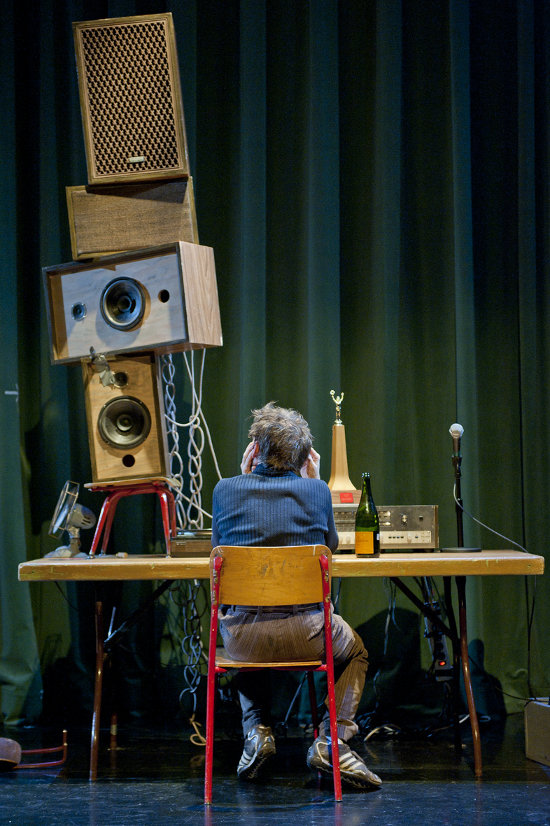 It's always worth seeing a full solo show from a longtime ensemble performer – you can get major shifts in aesthetic, scale, tone, thematic preoccupation; things just spill out. Patinoire, a solo from 7 Fingers co-founder Patrick Léonard, has exactly this feeling – as though it's the result of a concept that circulated for a long time in the back of the performer's mind, ideas that weren't suitable anywhere else percolating down over a period of years into a rich, dark base.

I don't know exactly what it compares to. Possibly some of the devising styles that follow that kind of performance entropy where everything falls apart; or maybe it's wasteland clown, where there's just the guts of old things and dead symbols amid the constant, prowling aloneness. The set is a stage and a table, a box of records and a gramaphone, a few bits and pieces like a trophy and a bottle (early on the partner for some slumped-over dancing). There's circus in it; usually not recognisable disciplines, but nonetheless very pure. In one moment you watch Patrick climb a tower of boxy old speakers, stacked every whichway, balanced on a broken child-size chair on top of a table, and he's spotlit, and somebody's Ninth Symphony is reverbing out of the speaker-stack with a curious omnidirectional blur. He gets to the top and you wonder what he might do next; I won't say what he does do next, but, well, it's perfect.

Having seen Loft a few years ago (at what, to be fair, was probably a borderline disastrous matinee performance) I was expecting not to enjoy Patrick's loud, hyperventilating style of clown – and perhaps I'm still among the small minority that doesn't find it fundamentally charming – but in Patinoire, for me, it reveals an edge and an authenticity rooted in a desire for attention and compulsion for performance, becoming funny – and, even, true – as the defensive layers of character peel away. In essence, things go from bad to worse. Empty bottles crowd over the tabletop, the trophy jumps successive sizes to appear as a dominating monolith, and the gramophone needle runs an empty track. Pulling an audience member onstage to help him manage the heavy, threading leads, Patrick carries the tower of speakers to the side of the stage, delivers a broken speech on the unexpected in performance and how 'sometimes it's good to not know', and disappears behind the back curtain, leaving the man there with diablo and sticks.

The back curtain: it's heavy, drawn. Every time Patrick goes behind it a few seconds later he slides out from under, unconscious, limbs sprawling, pushed halfway down the stage as though exiting a cartoon brawl. Maybe time passes, maybe the place changes. Eventually there's a reveal (I won't tell you what this is either) which sends you back over what you've seen, clicking some lost connections in place in the light of a clever stage trick that's also a powerful visual metaphor...

Patinoire struck me at the time as impressive and expert and sometimes brilliant, and the more I've thought about it the more I feel I've discovered. (Several days after the show there was one final surprise as I looked up the meaning of the title.) My interpretation of it is probably a mite more dour and serious than the next person's, but it still feels to me a very long way from the 7 Fingers' other work. I hope that it'll at least travel as widely and be seen by as many people as the blockbuster shows – and that it won't be the last solo we see from a member of the company.