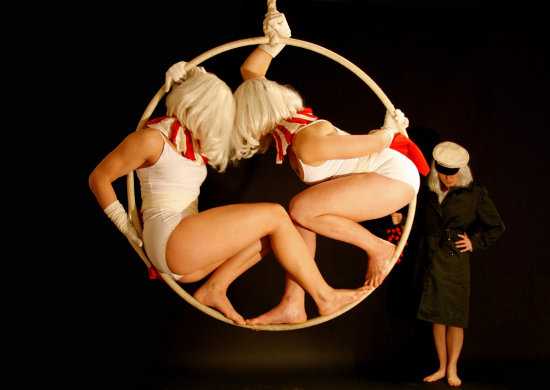 It’s strange really that there aren’t more instances of magic realist or fabulist circuses. Fiction writers understand and use the overlap, but I think Milkwood Rodeo is the first piece of stage work I’ve seen that successfully stakes out ground in the territory. Mixing projected film of an Indian circus with live performance and narration, it tells the story of Frank, acrobat trainer and animal-keeper, who acts both as the lynchpin for a circus that would otherwise be pulled apart by its own corruption, and as the clairvoyant who foresees its downfall.

Film and animations are projected onto a thin, gauze-like screen. The footage is slowed-down, with its sound removed or distorted, and the animations are of stars and symbols—a queer doubling of reality and interpretation. When Geneva does splits on the rope she sits in a cat’s cradle of joining lines, and the animation behind her draws stars into a constellation. Frank disappears after an argument with the circus proprietor, and the animals go with him, but cause and effect don’t follow so closely.

Milkwood Rodeo isn’t like the clean connecting lines of a constellation shape—the structure of interrelations is closer to a root system: complex and organic and mostly hidden. Frank reminds the narrator of Frank Sinatra, in a way, and Sinatra’s songs provide the backing and weave in and out of the facts and implications of events at this remembered circus. Some of the sides Milkwood Rodeo turns to face you are pretty inscrutable—I’m not at all sure what to draw from the projected husky dogs whose faces fade out to reveal dark clowns behind—but I think that’s fine, and true to the tightly-wrapped and half-obscured story it wants to tell: some productions are like a gift that unfolds in your imagination afterward.

The Sugar Beast Circus Show has many of the same virtues as Milkwood Rodeo. If anything, it’s technically more sophisticated. There’s a thrumming, forbidding soundtrack that keeps breaking down into staticky, insectile discordance, playing a vital role in controlling the tension and movement of the piece. And the show is brilliant at composing images: I was particularly taken with the miniature candy-stripe big-tops, lowered from the ceiling, that pulsed with inner light like deep sea jellyfish, but the whole production is very adept at using its lighting to control perspective and scale—you don’t really feel as though you’re in Jacksons Lane.

Sugar Beast is harder to précis than Milkwood Rodeo, and the company’s own copy must have been written before they were very far into making the piece. We’re told a couple of times that the year is 1859: a tipping-point for the weighting of science over faith, and I think probably for the maker Sugar Beast is an extension of the thinking that went into Milkwood Rodeo: the fakeness of performer narratives (the Russian is not Russian) and circus acts (the bear isn’t really juggling and the ball is on strings; anyway it’s not a real bear) is run up against the cold observation and dissection of scientific enquiry. Mostly I think it aligns itself in the grey middleground—it’s real, it’s not real—and in doing so casts itself a little too far adrift. It’s definitely more interesting and thoughtful than most iterations of the faux-Victorian steampunk aesthetic (and just to be clear this isn’t, and isn’t trying to be, steampunk; and it’s not quite Victorian either: the slide projections and some of the costumes seem more 30s/40s), but the source material feels often detached from the action on stage, which is, itself, a series of discontinuous images and revelations. I couldn’t make anything from the scene where the performers were entranced by throbbing green organic towers that lowered from the ceiling—the performers walking slowly toward them, opening mouths which played then with swallowed lights, screaming, their screams the noise of a distorted saxophone. And while in Milkwood Rodeo what you don’t understand just becomes part of the rich (and sinister) underlife of the production, in Sugar Beast these scenes don’t live in the same way—they’re only beautiful and strange.

But maybe that’s OK. There’s a lot of beauty and a lot of strangeness. No one could be disappointed by the Jimmy Saville of circus lions—his mane due a re-perm, his eyes slightly sequined—and who hasn’t yearned to speculate on the outcome of a meeting between P.T. Barnum and Charles Darwin? You’re not going to get this anywhere else.