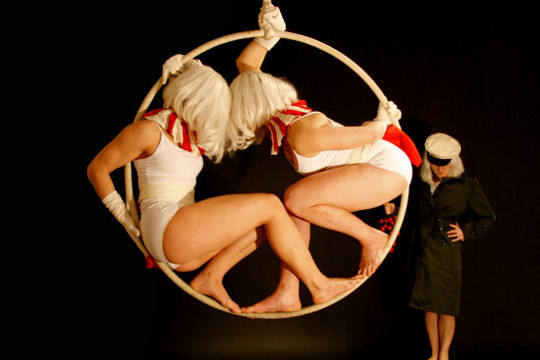 To the point of fragmentation. With Shunt associate Geneva Foster Gluck as founder and director, Sugar Beast Circus are a UK company with an intellectual, theoretical approach to making work – their pieces driven not by technique or even the exploration of a specific discipline, but by a swarming collection of ideas and notions. In The Powder Factory, 19th century notions of hysteria and the photographic image; in Milkwood Rodeo, Hollywood and narratives of disappearance; in The Sugar Beast Circus Show, evolution and the irrationality of science. The company's mode is to pursue logic to breakdown, to crinkle the smooth face of reality, and in doing so to present something honestly, truly, deeply weird.

With blank-faced women costumed in red, white and black uniforms (an enigmatic A striped across each of their backs), looped performances, video and sound, and subject matter that touches bizarrely on the mathematical nature of reality, being welcomed into the {Event(Dimension):} space feels a little like entering a museum that hasn’t had a visitor for a thousand years and where the meaning of the exhibits has been eroded half away.

Geneva Foster Gluck on {Event(Dimension):}
By John Ellingsworth on 11 October 2011 in Interviews

'The proposition on which I mean to insist at present, is simply this, that fringes of colours are produced by the interference of two portions of light; and I think it will not be denied by the most prejudiced, that the assertion is proved by the experiments I am about to relate, which may be repeated with great ease, whenever the sun shines, and without any other apparatus than is at hand to every one.' — Thomas Young preparing to describe the first double-slit experiment to the Royal Society in 1803

A piece taking its inspiration from the differences between quantum and particle physics, featuring lycraed supergirls, black holes and volcanoes, and based on a famously baffling experiment... John Ellingsworth talks to Sugar Beast Circus director Geneva Foster Gluck about the company’s new show {Event(Dimension):}.

It’s strange really that there aren’t more instances of magic realist or fabulist circuses. Fiction writers understand and use the overlap, but I think Milkwood Rodeo is the first piece of stage work I’ve seen that successfully stakes out ground in the territory.