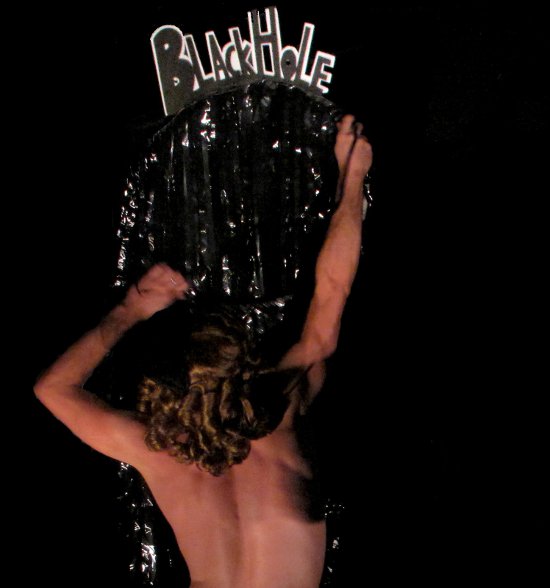 With blank-faced women costumed in red, white and black uniforms (an enigmatic A striped across each of their backs), looped performances, video and sound, and subject matter that touches bizarrely on the mathematical nature of reality, being welcomed into the {Event(Dimension):} space feels a little like entering a museum that hasn’t had a visitor for a thousand years and where the meaning of the exhibits has been eroded half away. The space is actually two spaces, the theatre divided by a heavy black curtain and the audience divvied up beforehand (into 1s and 0s) and led to either area/dimension by two stewards. On one side, before a wide and open stage, the audience will encounter mathematics wrapped in packets, A-girls who move forward and backward as though on rails, and a digital mountain that slumps and unravels into its constituent programming only to later reappear as an erupting, analogue volcano (lowered from the ceiling, deus ex machina volcano). On the other, in a narrow corridor of space, a story of Earth and evolution is playing out that implicates those that watch it by the fact of their observance. At half-time the audiences, without seeing each other, change sides, the soundtrack resets, and the whole mechanism plays out again...

The final event of the London International Mime Festival, and — appropriately enough — physically the most far-flung at satellite venue Jacksons Lane, Sugar Beast Circus’ {Event(Dimension):} has emerged from an R&D period that saw the company investigating the moments where the elegant mathematics of classical physics breaks down into the dizzying headfucked incoherence of quantum physics, exploring, among other things, the theory of entanglement, the behaviour of light, and the supremely unlikely business of wave-particle duality. Put simply, they picked some complex material, and even if {Event(Dimension):} isn’t looking to depict its foundational ideas literally — reformulating them instead into a particular texture of experience — I think it still has some trouble in measuring how much to explain, with small amounts of exposition coming from silent projected text (a neutral but nonetheless quite suspicious textual voice that fits with the lost museum feel), or, at one point, a 50s RP voiceover, worked into the soundtrack, giving a simple description of Newton’s ah-ha moment with the apple at the same time as aerialists on either side of the curtain master their apparatuses. I suppose a certain amount of framing is necessary, but think as well that the piece works best when it’s non-literal (notwithstanding my favourite prop: a giant observation eye, appearing after a brief intro to the double slit experiment, that projects the particle it perceives) and that any audience member who spends much time tracing back the theories expecting to find direct links and educational analogies will be led in circles.

The decision to divide the space for simultaneous performance and to double the soundtrack feels like the structural remnant of an early idea — an artefact of the original concept rather than a mechanism that arose during the devising process. It’s not disastrous, and being led through the narrow brick corridor running the back of the Jacksons Lane stage at the change of sides indulges some nosy and transgressive impulses, but by giving the audience two related performances {Event(Dimension):} is perhaps inviting a more active intellectual engagement than it’s then able to make room for: it’s put together like a puzzle, and suffused with a sort of mystery, but actually there’s no solution, the conceptual thinking behind the piece having been worked into a principally visual experience that only suggests the meanings underpinning a surface aesthetic of sensuous strangeness. Following the score of an expansive, queer, ranging, excellent soundtrack (compiled and cut together by Sugar Beast director Geneva Foster Gluck from old film soundtracks and music by Enslaved by Owls) it’s possible to connect scenes from one side to those on the other and to understand why they were paired, but, for me at least, there was no amplification or resonance between them.

In spite of all of which, I liked the piece a great deal — liked its precise, obscure arrangements, its ability to produce occasional startling uncanniness from sound and movement, and its manner of acknowledging reality only as the degraded memory of a distant past — and the problems seem to be the sort that will dissolve in the ambience of the piece given the advantage of time. It’s rare as well, in UK circus at least, to see research-based practice or aesthetic styles that are much outside the normalised devised theatre mode, and if Sugar Beast took a risk in approaching challenging material — or in premiering their work at a high-profile festival like LIMF — then I’m glad they did it with confidence, instinct, ambition and a whacked-out, singular vision of kitschy supergirls, time travel and volcanoes.