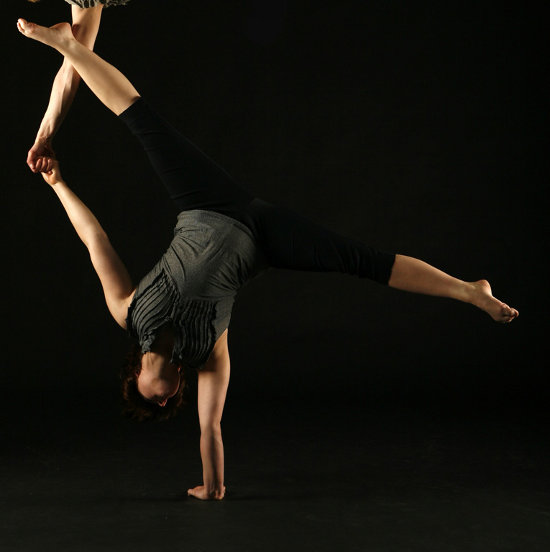 Last year I saw and reviewed the first part of Muualla, a collaboration between exceptional Finnish aerialist Ilona Jäntti and animator Tuula Jeker, and was broadly charmed by the world it created—a child's realm of exploration and pantomime danger where both the pleasures and the threats were imaginary. The second part, Balloon, initially seems more of the same, with Jäntti sliding from a room in a house which then becomes an expressive globular creature walking on tapering limbs; when it tries to speak, the speech bubble itself grows legs and shuffles away. There are many of these beasts in the landscape of Balloon, always on the verge of slipping into another form, like an alien (a friendly alien) who can't quite get the hang of corporeality, and who changes form as easily as thought. When Jäntti picks up some juggling rings and holds them out, the projection (at this point somehow seeming overeager) mimics the shape, drawing lines of circles that propel out behind her along the angle of her upraised arms. In this moment, and in others, the live performance and projection don't combine seamlessly, but they're not meant to. Where in the first part of Muualla it's simply the hand-drawn aesthetic that frees the piece from the constraints of extreme precision and synchronisation, in Balloon the instances of obvious discordance are the narrative: there's meant to be a dividing line; it's the frontier of communication. At the end of the piece, Jäntti is in an aerial hoop, facing ranks of tiny cell-like creatures who divide and replicate and move as one, at first crawling around their circles to mimic Jäntti, but gradually coming to prefigure her movement—the whole scene reminding me incredibly strongly of the latter stages of Greg Egan's novel Schild's Ladder, when the team of scientists travel in a bubble of their own physics (it's a nerd's book, yes) into a separate universe where language and interaction is entirely new. Perhaps it doesn't go so deep as all that, and perhaps I'm predisposed to see SF narratives in everything, but I do think that at the least, and at the end, Muualla proves itself more than whimsy and casual gaming.

Polar, a new work created for Jacksons Lane with the collaboration of handbalancer Natalie Reckert and musician Luke Styles, takes a different tack: where Muualla is characterised by an environment in constant flux, Polar is devised around wire and metal props and apparatus, steel grids and rolls of wire that even when forcibly manipulated retain the memory of their original shape. Attracted by the scuffling sounds overhead, the audience look up to see Natalie Reckert, blank-faced, moving on her hands across the hard grid of the overhead walkway; on stage, Jäntti walks within a roll of chickenwire, kicking it out to create a path in front even as the back curls in behind; the two meet, among long strips of wire that are lifted up into a waving forest. What's it about? Distance, fencing, confinement. But what's it about? Couldn't tell you. Focusing inwards toward its materials, and, perhaps, its opaque premise, rather than outward to the presence of an audience, Polar isn't thoughtless but its thinking currently sits a long way abstracted from its public face. There's a great deal of metaphorical potential in the materials the company have picked to represent an Arctic landscape, one that can either endlessly preserve or immediately erase the traces of those that visit it, and the piece already has a surfeit of striking images (not least an aerial sequence performed on a stream of wire netting). Maybe in time it will become something very different. For now, it's raw and unworked, cold and formalist. I liked it.