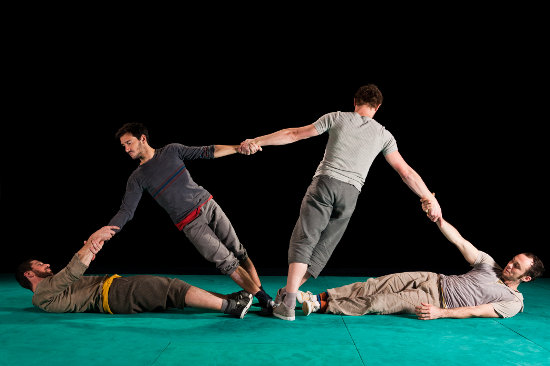 Maybe it's just that boys like to break things. Un Loup Pour L'Homme's Face Nord, performed by four men who will travel the sweat spectrum from dry to damp to sodden in the course of the gruelling 60 minutes they spend under the public eye, is presented as a series of games or exercises meant to test the physical limits of the group onstage — asking more and more of them until, inevitably, they fail. Played mostly in silence, propless but for the American football gear two of the performers don at the beginning for a series of abrupt, concussive takedowns which introduce the switchback tone cutting between humour and severity, the attention and seriousness with which the company armour themselves as they submit to the rules of the game, and the faint stale stunt-machismo that will thread though the whole rest of the show, Face Nord is purposeful and extremely confident, occasionally stylish, full-bodied and visceral, yet a little too proud.

Early on there are simple games of mimicry based on familiar follow-my-lead warm-ups where the four, in a line, walk then jog then bound their way around the stage's perimeter, and an extended game of all-blind blind man's bluff that sends one of the bluffers (if that's the terminology...) tripping into the front rank of audience, but these smaller actions are outweighed by variations on scenes where the four performers climb over one another, with much difficulty, on ankles and calves and heads and shoulders, or where they perform a challenge made harder by degrees, such as the lightest acrobat leaping between bases — hunched over to offer their backs as launch and landing stations — over progressively greater distances.

In most cases, there are two ways to break the game. The first is to do so purposefully, and there are several moments within the repetition of an action where a performer will step outside of the rules — faced with traversing yet another entangled mass of human bodies and limbs, he will give the audience a wry smile and cheat his way around the edge; this way of looking out of the performance, toward the audience, happens a lot, and lightens the second way the group can break a game: by failing. When the four build an arch bridge from their own bodies — two as bases, two on shoulders and leaning into one another — they edge apart, broadening the curve until their structure collapses. They do it again and again; it will always collapse.

Is it dangerous? Hmm, maybe. You'd have to ask them. But I think it's possible to distinguish between work that is publicly, physically risky and work that is personally, theatrically so, and to say that Face Nord has chosen the former as a piece where the consequences of failure are physical rather than dramatic, and where the inevitably of collapse is met with a cavalier, or even eager, mind. As such I found myself anxious and annoyed as the lightest acrobat prepared to jump into his place atop an unorthodox human tower that loomed misshapenly over my front-row crash zone. I didn't want to be there.

If you play until you fail, with the intention of failing, then what is there? In Face Nord there's some of the freedom and fearlessness of children at play — but of course the performers are adults, and they're not pretending to be anything else, and their determination is infected with this idea that there's some secret of enlightenment or absolution to be found in pushing yourself until you hit the dirt, an ennobling respect for extremity and hardship that is one of only two explanations I can imagine for the piece's title. It also makes a clear connection to sport.

Face Nord knows, I think, this connection — apart from the aggressive tackling at the start, it stages the performance on a square of (turquoise) flooring, unadorned, that reaches to the feet of the foremost audience members (sitting on all four sides in steeply raked seating). At the corners, above, are these big lights; I don't know what they're called. Boxy lights, high and white and bright and even, indicating human presence with the same compass-point shadows that track a footballer on the stadium's field. There's no contrast, no blindspots; taken together, our audience has a total perspective that surrounds the performance: even if the company wanted to, there's nowhere for them to hide.

This self-exposure — to the game, to the audience — is a big part of what sport is, and there's mileage in the commonality of circus and sports, or games, as two practices where choice is starkly illuminated by the near presence of risk and consequence — in circus, both in the moment-to-moment reality of executing an exceptional feat, and in the microcosmic density of the feat itself to speak of the lifetime of choices or sacrifices that led to it; in sports, woven into the fabric of their rules, and, in certain cases, into social phenomena of pressure, embarrassment, heroism, and the whole mess of what you feel when your experience is multiplied by each person watching.

Face Nord sits among all these things, but is content not to question them. I liked it at times, liked the elegance and gentleness of the moment when the performers clasped hands to form a kind of half Ferris wheel, a human trust mechanism that lowered them to and raised them from the ground, liked the combination of unity and individualism, liked any moment where a performer simply walked somewhere. But it's safe — even if it's physically dangerous, even if it's exposed on all sides, then it's safe in the sense that it's already accepted its conditions entirely, and made the assumption that there's purity within that; and even if it's different every night, it's still predictable in the programmatic way it distributes its glances to the audiences, its breaks in rhythm and repetition, its stepped on the bollocks jokes. It flatters the audience — the way real and unmistakeable feats of physical exertion can — but forgets I think what an audience might need outside of that.