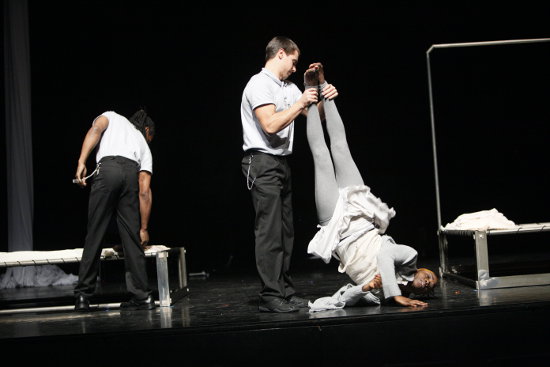 A West African woman is inexplicably taken away from her home. Held against her will in a prison, she is miles from her husband, her child and everything she knows. Punished for her unexplained crimes in an unknown world, this woman is both fallen from her homeland and perceived as fallen in nature.

Created and directed by Vicki Amedume, Fallen is the semi-autobiographical story of her experiences of alienation when she first arrived in England. Told through a mixture of aerial dance, circus and animation, the woman of the story (performer Sera Adetoun) spirals in her gradual descent into a new and unknowable world. Suspended in the air by two guards, the woman is roughly examined. The components of this sparse set are transformed and manipulated: two bare bed structures become interlocking grills that form a cage, in which the woman struggles and strains.

Plagued by nightmares and hysterical visions, the woman is obsessed by memories of the family she left behind. Shown through painstakingly crafted aerial routines on silks, and in a more physically limited sequence played out between the two beds placed on top of one another, the woman's memories of her child collide with memories of her husband. Cradling images become sexualised: with the newborn child played by a full grown man (Garry Benjamin), his position between her legs can be read in more than one way. In a particularly vivid dream sequence, the woman is suspended horizontally from the ceiling. Running across a drape upon which an animated road is projected, she is eventually swallowed up by a hideous and engulfing mouth.

With the soundscape of the piece created through a collaboration with composer Jules Maxwell, we hear noises of terror, entrapment and frustration, which provide the more static scenes of prison tedium with emotional charge. The woman's fledgling relationship with her roommate and fellow prisoner shows her wariness to trust others, even if they are engrained in the same physical routines and equally unable to escape the persecution of this prison environment.

The difficulty of telling a story without words is not to be underestimated, but neither is an audience's attention span and need for psychological progression throughout a performance. Fallen feels like a short story or even a poem with novelistic ambitions: with a 55 minute running time, we expect its content to be more diverse, or to lead us from one place, via a journey, to another. The woman is eventually liberated from her personal trauma and reconciled to her present situation, but we don't know how or why this change occurred and, as a result, feel little catharsis or sympathy. There's a continual menace which haunts this woman, but the jeopardy suggested never quite realises itself. With almost an hour devoted to the painting of a single mood and feeling, it's hard not to wish that the physical proficiency of Upswing was allowed to play out a more complex narrative.