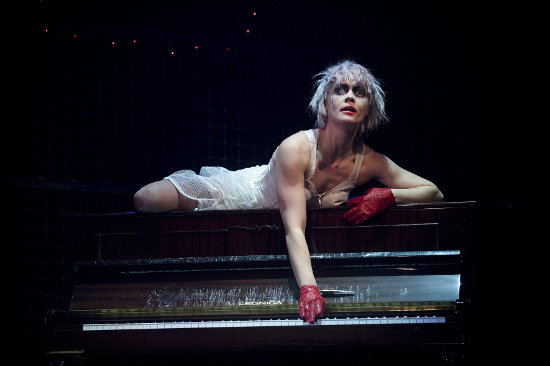 Wham's Last Christmas on a gradual volume-build is as good a harbinger as any of the Devil's approach. In Vesturport's Faust it is something like the final straw – Johann, once a great actor, now a retiree in a nursing home, has just been gently rebuffed by his young nurse, Greta. Greta's brother has entered and seen the two of them, seen the truth, and reacted without anger, just patronising dismissal; it's Christmas and there's no family for Johann to visit, or to visit him; the home has emptied, and the last remaining resident, Johann's chess opponent, has slumped dead at the board. And then the Wham song. Johann resolves to hang himself with a string of fairy lights.

It's a great beginning, and I could have stayed there. As Johann, Thorsteinn Gunnarsson concocts a convincing blend of pathos and reluctance and self-absorption as Greta pushes him to remember his days on the stage – and to act out the one role that in all his career he never played: Doctor Faustus. His protestations that he is too tired, too washed-up, cannot remember are a cursory formality, and he begins a preface that imagines a wager between the forces of Heaven and Hell over Faust's immortal soul. Of course, he's captivating. But before Johann can play Faust himself, the performance is interrupted, events lead him to his attempted suicide, and when he shouts for help it is the Devil that comes to his aid.

It's when Johann enters a pact with Mefisto to restore his youth so that he can pursue Greta that Vesturport's production drops its subtlety and charm for brash spectacle. Archdemon Lilith flies in on a wire, devils bomb into the netting that stretches over the audience's heads; lights flare. During its mid-section, the production shuttles back and forth between slapstick and tragedy, never quite in control. This is fine most of the time, and obviously one facet of the Vesturport style, but the poignant and slower scenes don't have the support either side of them to really stand. Greta sending her brother to Hell is chilling (especially since the night I saw it a problem with equipment meant she had to actually herself push and pitch him into the Underworld's smoking maw), but doesn't have the time to settle. A couple of pantomimic moments when the performers reference their status as performers sit badly.

The theatrical aesthetic is disposability – fly in, fly out. Everything's a one-shot. It uses circus the same way – get an effect, then toss it out. So in spite of the illustrations on the poster image that depict lots of devils doing trapeze (with some dreadful sickle-feet), it uses circus shallowly and briefly. Sending Johann/Faust and Greta up on white strops for their moment of grace, it's not quite the L'Amour de Loin approach, but it's not a million miles away either. There's a sexy devil-woman/succubus who comes on to do a couple of cartwheels and backflips to tempt Faust, but otherwise the cast seem ill at ease with the small amounts of acrobatics and aerial. It's not that they don't 'make the grade' or whatever, but if you don't spend time with a discipline you can't go deep.

And in the end it's not deep, nor is it affecting past the strength of Gunnarsson's performance. As an adaptation it does the job, stripping out the poetry to replace it with a purposefully flat and bawdy register. It's enjoyable enough, and probably an effective antidote for anyone with the misfortune to have to study Faust as part of their education. The performances are hearty; the set design and lighting (by Axel Jóhannesson and Orri Pétursson, respectively) creates a lush and electric netherworld; the ungainly bird-like run of devils on the netting is consistently amusing; and you get to hear Mefisto sing a rock song called 'I'm Evil'. It's trashy, vampish; expensive but not fine; the stakes are low.